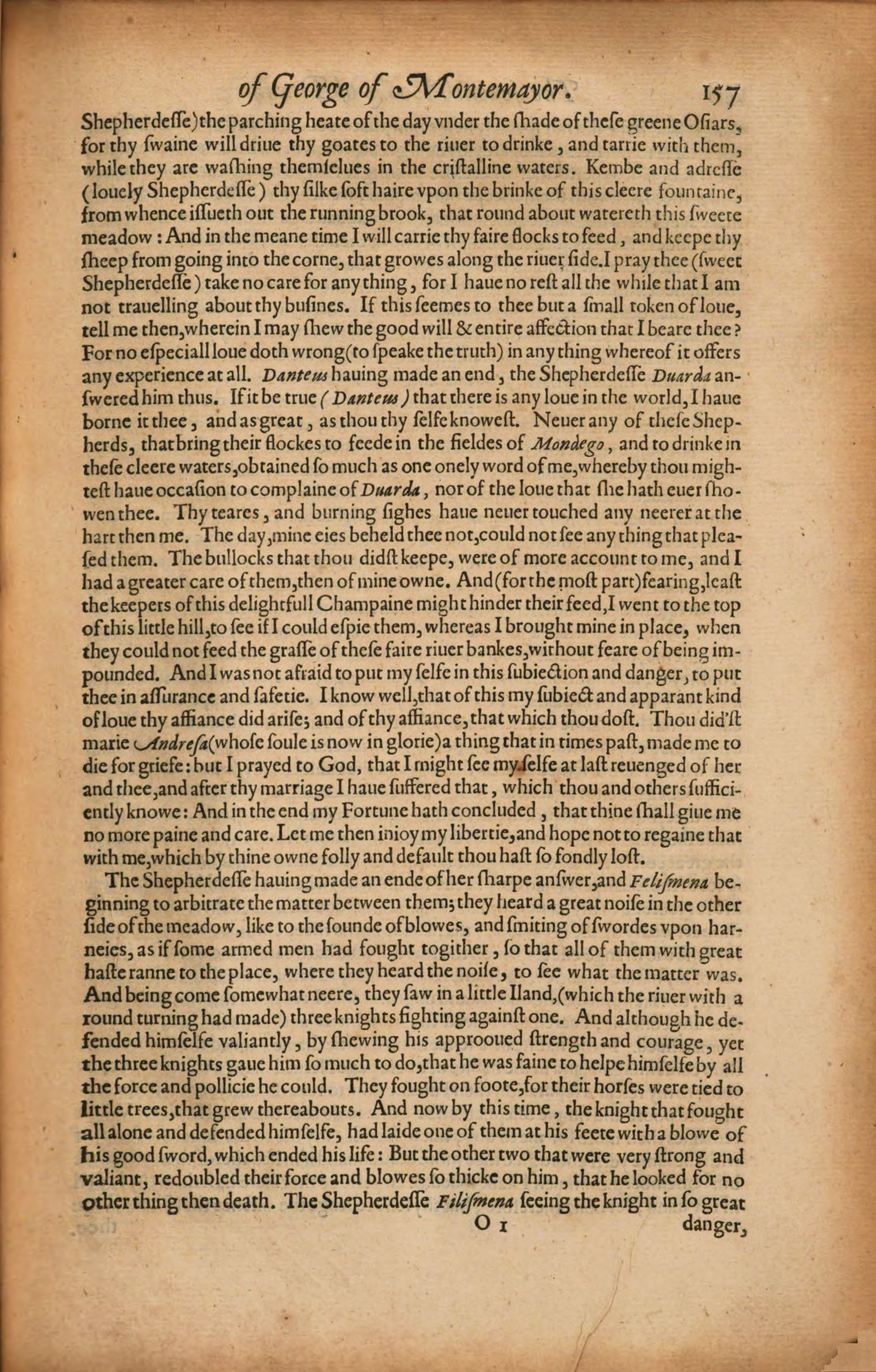 Shepherdesse) the parching heate of the day vnder the shade of these greene Osiars, for thy swaine will driue thy goates to the riuer to drinke, and tarrie with them, while they are washing themselues in the cristalline waters. Kembe and adresse (louely Shepherdesse) thy silke soft haire vpon the brinke of this cleere fountaine, from whence issueth out the running brook, that round about watereth this sweete meadow: And in the meane time I will carrie thy faire flocks to feed, and keepe thy sheep from going into the corne, that growes along the riuer side. I pray thee (sweet Shepherdesse) take no care for anything, for I haue no rest all the while that I am not trauelling about thy busines. If this seemes to thee but a small token of loue, tell me then, wherein I may shew the good will & entire affection that I beare thee? For no especiall loue doth wrong (to speake the truth) in anything whereof it offers any experience at all. Danteus hauing made an end, the Shepherdesse Duarda anâˆ£swered him thus. If it be true (Danteus) that there is any loue in the world, I haue borne it thee, and as great, as thou thy selfe knowest. Neuer any of these Shepâˆ£herds, that bring their flockes to seede in the fieldes of Mondego, and to drinke in these cleere waters, obtained so much as one onely word of me, whereby thou mighâˆ£test haue occasion to complaine of Duarda, nor of the loue that she hath euer shoâˆ£wen thee. Thy teares, and burning sighes haue neuer touched any neerer at the hart then me. The day, mine eies beheld thee not, could not see anything that pleaâˆ£sed them. The bullocks that thou didst keepe, were of more account to me, and I had a greater care of them, then of mine owne. And (for the most part) fearing, least the keepers of this delightfull Champaine might hinder their feed, I went to the top of this little hill, to see if I could espie them, whereas I brought mine in place, when they could not feed the grasse of these faire riuer bankes, without feare of being imâˆ£pounded. And I was not afraid to put my selfe in this subiection and danger, to put thee in assurance and safetie. I know well, that of this my subiect and apparant kind of loue thy affiance did arise; and of thy affiance, that which thou dost. Thou didâ€™st marie Andresa (whose soule is now in glorie) a thing that in times past, made me to die for griefe: but I prayed to God, that I might see my selfe at last reuenged of her and thee, and after thy marriage I haue suffered that, which thou and others sufficiâˆ£ently knowe: And in the end my Fortune hath concluded, that thine shall giue me no more paine and care. Let me then inioy my libertie, and hope not to regaine that with me, which by thine owne folly and default thou hast so fondly lost.
The Shepherdesse hauing made an ende of her sharpe answer, and Felismena beâˆ£ginning to arbitrate the matter between them; they heard a great noise in the other side of the meadow, like to the sounde of blowes, and smiting of swordes vpon harâˆ£neies, as if some armed men had fought togither, so that all of them with great haste ranne to the place, where they heard the noise, to see what the matter was. And being come somewhat neere, they saw in a little Iland, (which the riuer with a round turning had made) three knights fighting against one. And although he deâˆ£fended himselfe valiantly, by shewing his approoued strength and courage, yet the three knights gaue him so much to do, that he was faine to helpe himselfe by all the force and pollicie he could. They fought on foote, for their horses were tied to little trees, that grew thereabouts. And now by this time, the knight that sought all alone and defended himselfe, had laide one of them at his feete with a blowe of his good sword, which ended his life: But the other two that were very strong and valiant, redoubled their force and blowes so thicke on him, that he looked for no other thing then death. The Shepherdesse Filismena seeing the knight in so great