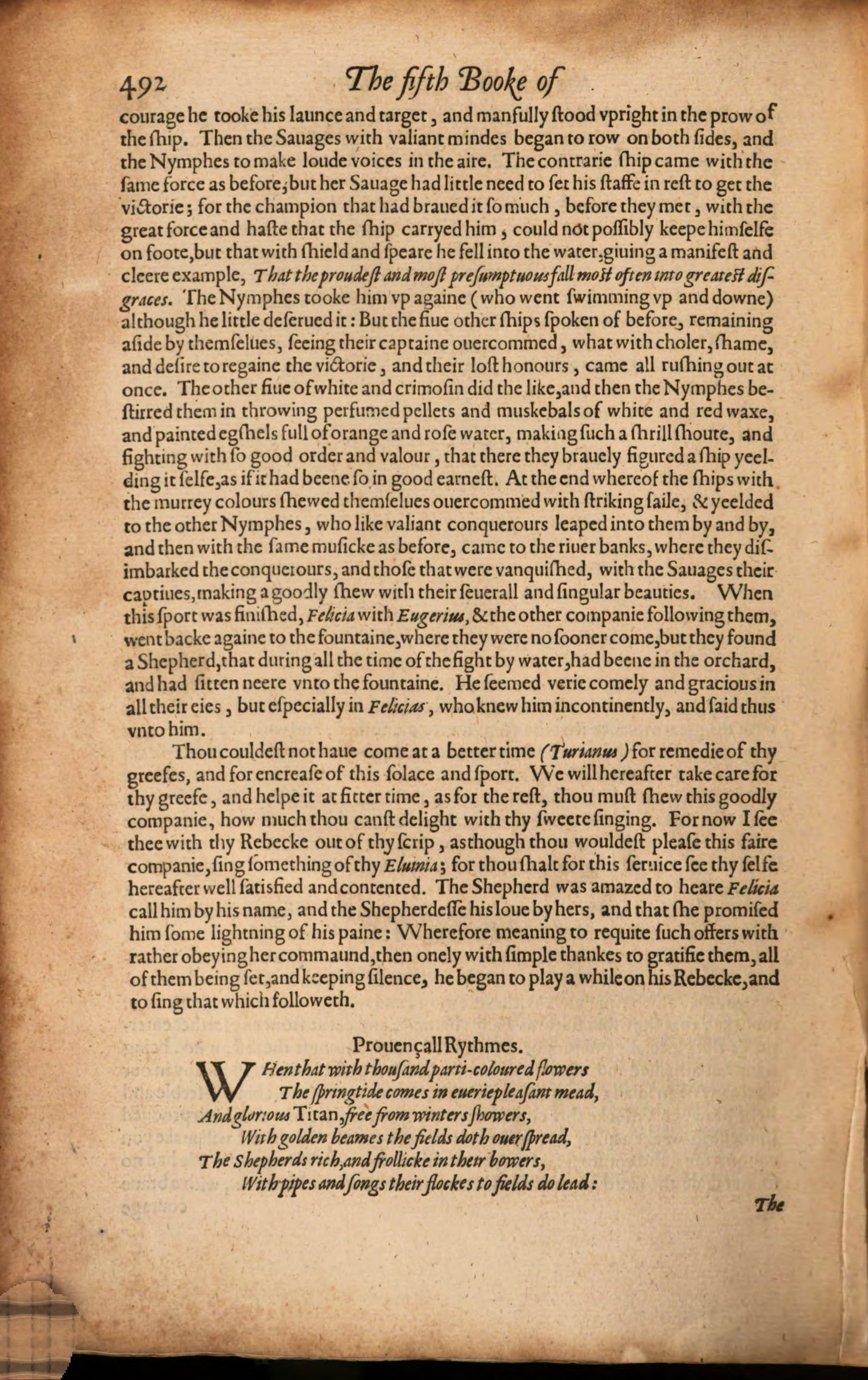 courage he tooke his launce and target, and manfully stood vpright in the prow of the ship. Then the Sauages with valiant mindes began to row on both sides, and the Nymphes to make loude voices in the aire. The contrarie ship came with the same force as before, but her Sauage had little need to set his staffe in rest to get the victorie; for the champion that had braued it so much, before they met, with the great force and haste that the ship carryed him, could not possibly keepe himselfe on foote, but that with shield and speare he fell into the water, giuing a manifest and cleere example, That the proudest and most presumptuous fall most often into greatest disâˆ£graces. The Nymphes tooke him vp againe (who went swimming vp and downe) although he little deserued it: But the fiue other ships spoken of before, remaining aside by themselues, seeing their captaine ouercommed, what with choler, shame, and desire to regaine the victorie, and their lost honours, came all rushing out at once. The other fiue of white and crimosin did the like, and then the Nymphes beâˆ£stirred them in throwing perfumed pellets and muskebals of white and red waxe, and painted egshels full of orange and rose water, making such a shrill shoute, and fighting with so good order and valour, that there they brauely figured a ship yeelâˆ£ding it selfe, as if it had beene so in good earnest. At the end whereof the ships with the murrey colours shewed themselues ouercommed with striking saile, & yeelded to the other Nymphes, who like valiant conquerours leaped into them by and by, and then with the same musicke as before, came to the riuer banks, where they disâˆ£imbarked the conquerours, and those that were vanquished, with the Sauages their captiues, making a goodly shew with their seuerall and singular beauties. When this sport was finished, Felicia with Eugerius, & the other companie following them, went backe againe to the fountaine, where they were no sooner come, but they found a Shepherd, that during all the time of the fight by water, had beene in the orchard, and had sitten neere vnto the fountaine. He seemed verie comely and gracious in all their eies, but especially in Felicias, who knew him incontinently, and said thus vnto him.
Thou couldest not haue come at a better time (Turianus) for remedie of thy greefes, and for encrease of this solace and sport. We will hereafter take care for thy greefe, and helpe it at fitter time, as for the rest, thou must shew this goodly companie, how much thou canst delight with thy sweete singing. For now I see, thee with thy Rebecke out of thy scrip, as though thou wouldest please this faire companie, sing something of thy Elumia; for thou shalt for this seruice see thy selfe hereafter well satisfied and contented. The Shepherd was amazed to heare Felicia call him by his name, and the Shepherdesse his loue by hers, and that she promised him some lightning of his paine: Wherefore meaning to requite such offers with rather obeying her commaund, then onely with simple thankes to gratifie them, all of them being set, and keeping silence, he began to play a while on his Rebecke, and to sing that which followeth.
ProuenÃ§all Rythmes.
WHen that with thousand parti-coloured flowers
The springtide comes in euerie pleasant mead,
And glorious Titan, free from winters showers,
With golden beames the fields doth ouerspread,
The Shepherds rich, and frollicke in their bowers,
With pipes and songs their flockes to fields do lead: