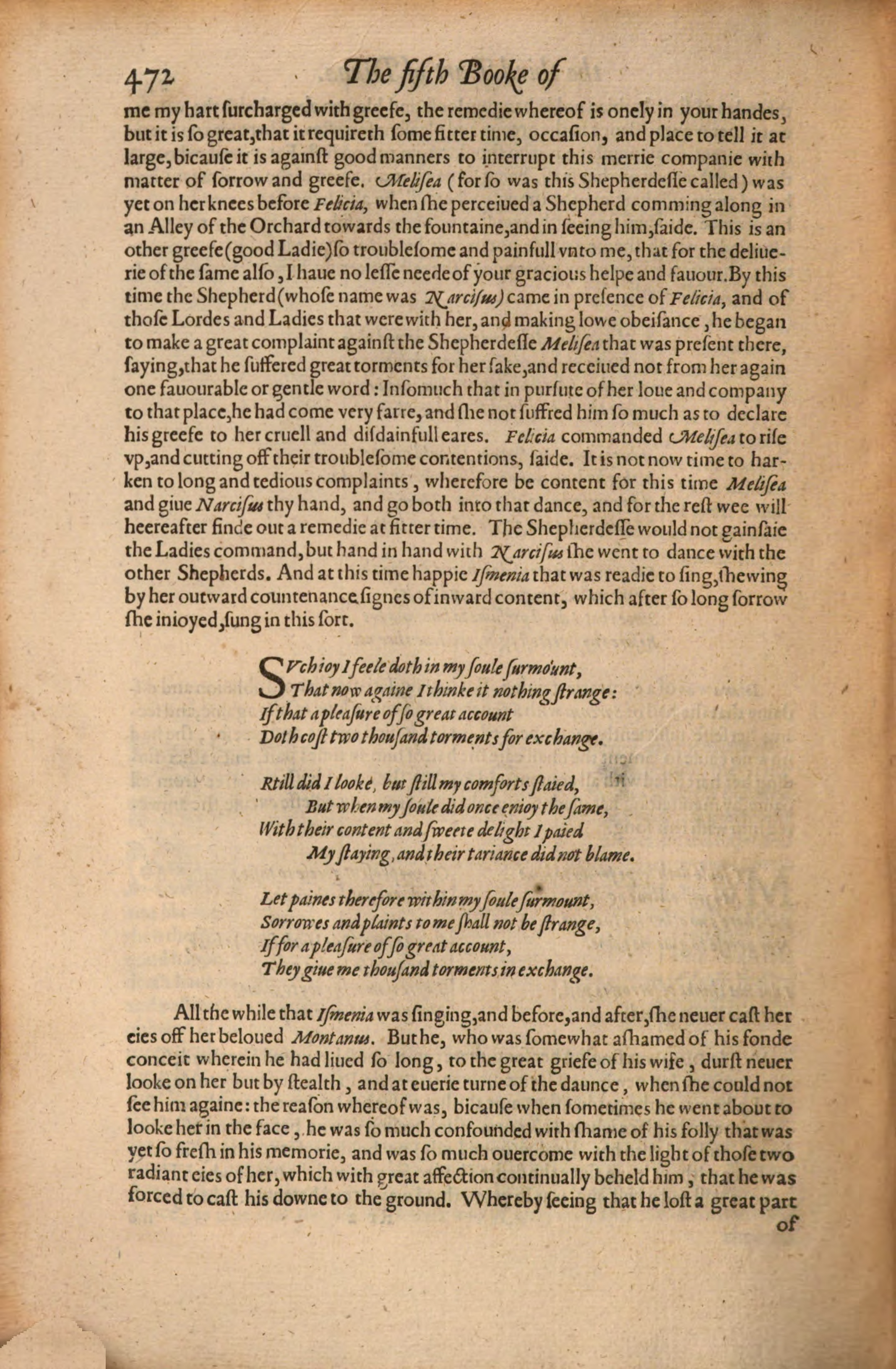 me my hart surcharged with greefe, the remedie whereof is onely in your handes, but it is so great, that it requireth some fitter time, occasion, and place to tell it at large, bicause it is against good manners to interrupt this merrie companie with matter of sorrow and greefe. Melisea (for so was this Shepherdesse called) was yet on her knees before Felicia, when she perceiued a Shepherd comming along in an Alley of the Orchard towards the fountaine, and in seeing him, saide. This is an other greefe (good Ladie) so troublesome and painfull vnto me, that for the deliueâˆ£rie of the same also, I haue no lesse neede of your gracious helpe and fauour. By this time the Shepherd (whose name was Narcisus) came in presence of Felicia, and of those Lordes and Ladies that were with her, and making lowe obeisance, he began to make a great complaint against the Shepherdesse Melisea that was present there, saying, that he suffered great torments for her sake, and receiued not from her again one fauourable or gentle word: Insomuch that in pursute of her loue and company to that place, he had come very farre, and she not suffred him so much as to declare his greefe to her cruell and disdainfull eares. Felicia commanded Melisea to rise vp, and cutting off their troublesome contentions, saide. It is not now time to harâˆ£ken to long and tedious complaints, wherefore be content for this time Melisea and giue Narcisus thy hand, and go both into that dance, and for the rest wee will heereafter finde out a remedie at fitter time. The Shepherdesse would not gain saie the Ladies command, but hand in hand with Narcisus she went to dance with the other Shepherds. And at this time happie Ismenia that was readie to sing, shewing by her outward countenance signes of inward content, which after so long sorrow she inioyed, sung in this sort.

SVch ioy I feele doth in my soule surmount,
That now againe I thinke it nothing strange:
If that a pleasure of so great account
Doth cost two thousand torments for exchange.
Rtill did I looke but still my comforts staied,
But when my soule did once enioy the same,
With their content and sweete delight I paied
My staying, and their tariance did not blame.
Let paines therefore within my soule surmount,
Sorrowes and plaints to me shall not be strange,
If for a pleasure of so great account,
They giue me thousand torments in exchange.

All the while that Ismenia was singing, and before, and after, she neuer cast her eies off her beloued Montanus. But he, who was somewhat ashamed of his fonde conceit wherein he had liued so long, to the great griefe of his wife, durst neuer looke on her but by stealth, and at euerie turne of the daunce, when she could not see him againe: the reason whereof was, bicause when sometimes he went about to looke her in the face, he was so much confounded with shame of his folly that was yet so fresh in his memorie, and was so much ouercome with the light of those two radiant eies of her, which with great affection continually beheld him, that he was forced to cast his downe to the ground. Whereby seeing that he lost a great part