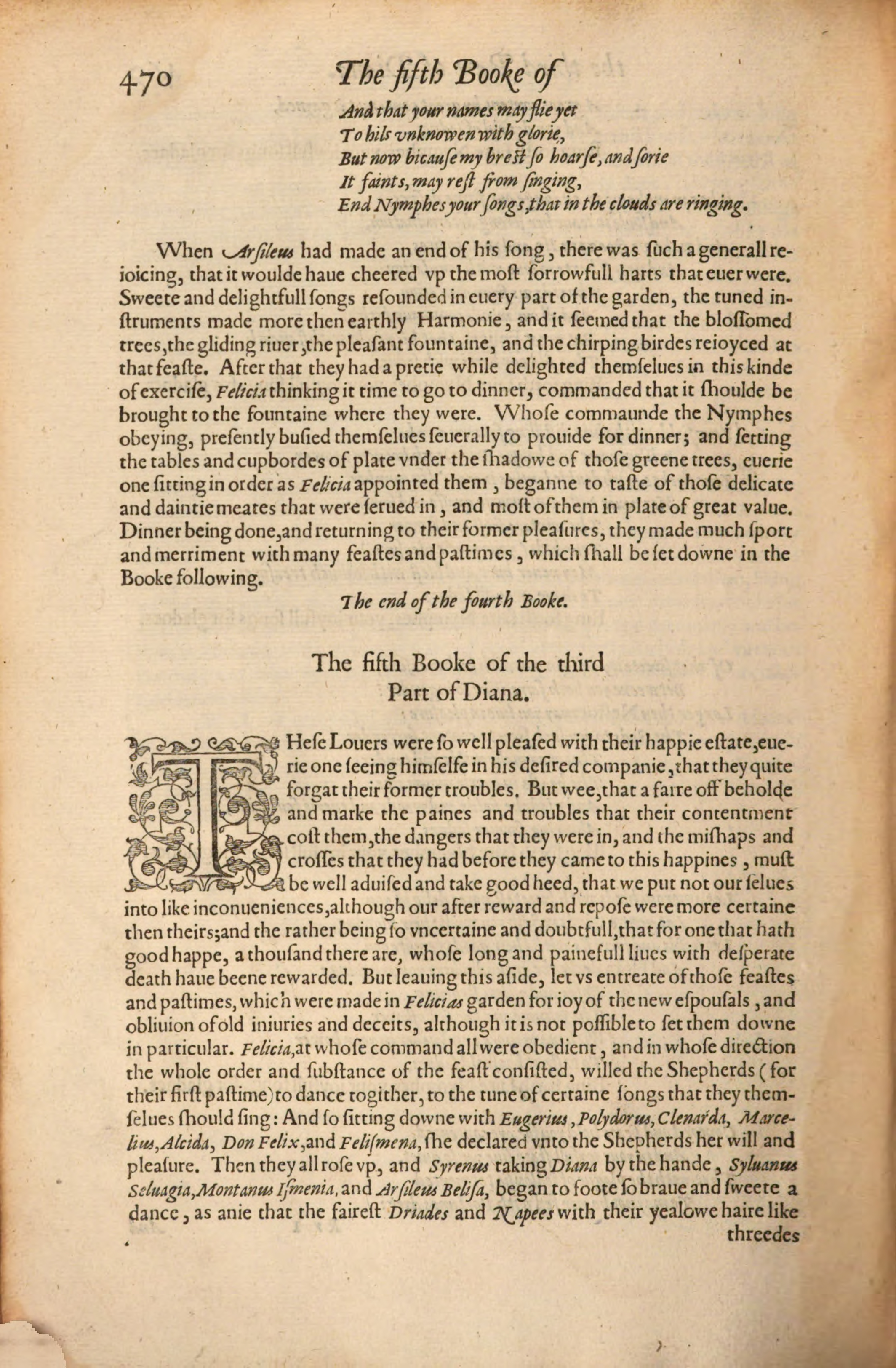 And that your names may flie yet
To hils vnknowen with glorie,
But now bicause my brest so hoarse, and sorie
It faints, may rest from singing,
End Nymphes your songs, that in the clouds are ringing.

When Arsileus had made an end of his song, there was such a generall reâˆ£ioicing, that it woulde haue cheered vp the most sorrowfull harts that euer were. Sweete and delightfull songs resounded in euery part of the garden, the tuned inâˆ£struments made more then earthly Harmonie, and it seemed that the blossomed trees, the gliding riuer, the pleasant fountaine, and the chirping birdes reioyced at that feaste. After that they had a pretie while delighted themselues in this kinde of exercise, Felicia thinking it time to go to dinner, commanded that it shoulde be brought to the fountaine where they were. Whose commaunde the Nymphes obeying, presently busied themselues seuerally to prouide for dinner; and setting the tables and cupbordes of plate vnder the shadowe of those greene trees, euerie one sitting in order as Felicia appointed them, beganne to taste of those delicate and daintie meates that were serued in, and most of them in plate of great value. Dinner being done, and returning to their former pleasures, they made much sport and merriment with many feastes and pastimes, which shall be set downe in the Booke following.

The end of the fourth Booke.

The fifth Booke of the third Part of Diana.

THese Louers were so well pleased with their happie estate, eueâˆ£rie one seeing himselfe in his desired companie, that they quite forgat their former troubles. But wee, that a farre off beholde and marke the paines and troubles that their contentment cost them, the dangers that they were in, and the mishaps and crosses that they had before they came to this happines, must be well aduised and take good heed, that we put not our selues into like inconueniences, although our after reward and repose were more certaine then theirs; and the rather being so vncertaine and doubtfull, that for one that hath good happe, a thousand there are, whose long and painefull liues with desperate death haue beene rewarded. But leauing this aside, let vs entreate of those feastes and pastimes, which were made in Felicias garden for ioy of the new espousals, and obliuion of old iniuries and deceits, although it is not possible to set them downe in particular. Felicia, at whose command all were obedient, and in whose direction the whole order and substance of the feast consisted, willed the Shepherds (for their first pastime) to dance togither, to the tune of certaine songs that they themâˆ£selues should sing: And so sitting downe with Eugerius, Polydorus, Clenarda, Marceâˆ£lius, Alcida, Don Felix, and Felismena, she declared vnto the Shepherds her will and pleasure. Then they all rose vp, and Syrenus taking Diana by the hande, Syluanus Seluagia, Montanus Ismenia, and Arsileus Belisa, began to foote so braue and sweete a dance, as anie that the fairest Driades and Napees with their yealowe haire like