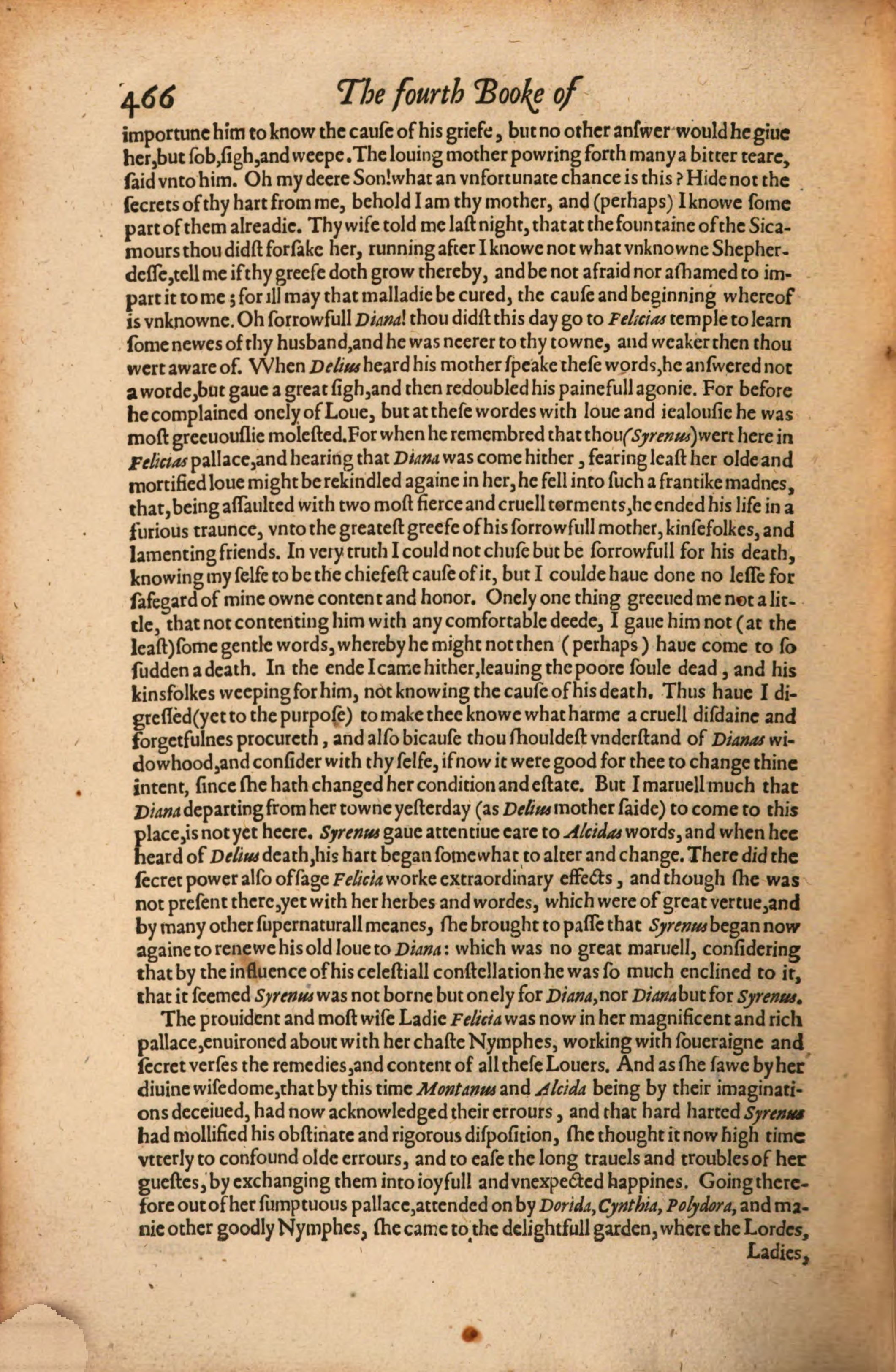 importune him to know the cause of his griefe, but no other answer would he giue her, but sob, sigh, and weepe. The louing mother powring forth many a bitter teare, said vnto him. Oh my deere Son! what an vnfortunate chance is this? Hide not the secrets of thy hart from me, behold I am thy mother, and (perhaps) I knowe some part of them alreadie. Thy wife told me last night, that at the fountaine of the Sicaâˆ£mours thou didst forsake her, running after I knowe not what vnknowne Shepherâˆ£desse, tell me if thy greefe doth grow thereby, and be not afraid nor ashamed to imâˆ£part it to me; for ill may that malladie be cured, the cause and beginning whereof is vnknowne. Oh sorrowfull Diana! thou didst this day go to Felicias temple to learn some newes of thy husband, and he was neerer to thy towne, and weaker then thou wert aware of. When Delius heard his mother speake these words, he answered not a worde, but gaue a great sigh, and then redoubled his painefull agonie. For before he complained onely of Loue, but at these wordes with loue and iealousie he was most greeuouslie molested. For when he remembred that thou (Syrenus) wert here in Felicias pallace, and hearing that Diana was come hither, fearing least her olde and mortified loue might be rekindled againe in her, he fell into such a frantike madnes, that, being assaulted with two most fierce and cruell torments, he ended his life in a furious traunce, vnto the greatest greefe of his sorrowfull mother, kinsefolkes, and lamenting friends. In very truth I could not chuse but be sorrowfull for his death, knowing my selfe to be the chiefest cause of it, but I coulde haue done no lesse for safegard of mine owne content and honor. Onely one thing greeued me not a litâˆ£tle, that not contenting him with any comfortable deede, I gaue him not (at the least) some gentle words, whereby he might not then (perhaps) haue come to so sudden a death. In the ende I came hither, leauing the poore soule dead, and his kinsfolkes weeping for him, not knowing the cause of his death. Thus haue I diâˆ£gressed (yet to the purpose) to make thee knowe what harme a cruell disdaine and forgetfulnes procureth, and also bicause thou shouldest vnderstand of Dianas wiâˆ£dowhood, and consider with thy selfe, if now it were good for thee to change thine intent, since she hath changed her condition and estate. But I maruell much that Diana departing from her towne yesterday (as Delius mother saide) to come to this place, is not yet heere. Syrenus gaue attentiue eare to Alcidas words, and when hee heard of Delius death, his hart began somewhat to alter and change. There did the secret power also of sage Felicia worke extraordinary effects, and though she was not present there, yet with her herbes and wordes, which were of great vertue, and by many other supernaturall meanes, she brought to passe that Syrenus began now againe to renewe his old loue to Diana: which was no great maruell, considering that by the influence of his celestiall constellation he was so much enclined to it, that it seemed Syrenus was not borne but onely for Diana, nor Diana but for Syrenus.
The prouident and most wise Ladie Felicia was now in her magnificent and rich pallace, enuironed about with her chaste Nymphes, working with soueraigne and secret verses the remedies, and content of all these Louers. And as she sawe by her diuine wisedome, that by this time Montanus and Alcida being by their imaginatiâˆ£ons deceiued, had now acknowledged their errours, and that hard harted Syrenus had mollified his obstinate and rigorous disposition, she thought it now high time vtterly to confound olde errours, and to ease the long trauels and troubles of her guestes, by exchanging them into ioyfull and vnexpected happines. Going thereâˆ£fore out of her sumptuous pallace, attended on by Dorida, Cynthia, Polydora, and maâˆ£nie other goodly Nymphes, she came to the delightfull garden, where the Lordes,