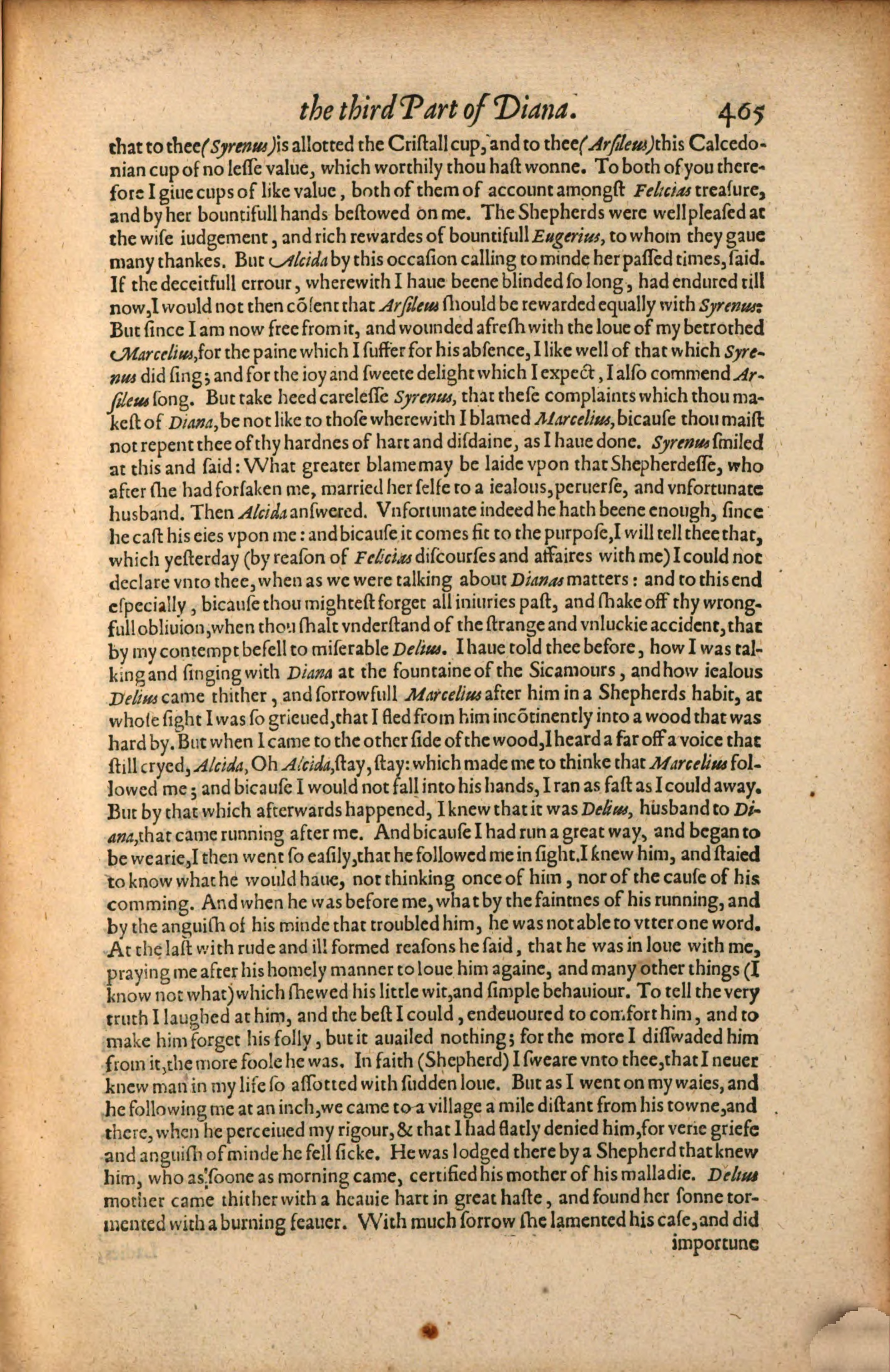 that to thee (Syrenus) is allotted the Cristall cup, and to thee (Arsileus) this Calcedoâˆ£nian cup of no lesse value, which worthily thou hast wonne. To both of you thereâˆ£fore I giue cups of like value, both of them of account amongst Felicias treasure, and by her bountifull hands bestowed on me. The Shepherds were well pleased at the wife iudgement, and rich rewardes of bountifull Eugerius, to whom they gaue many thankes. But Alcida by this occasion calling to minde her passed times, said. If the deceitfull errour, wherewith I haue beene blinded so long, had endured till now, I would not then coÌ„sent that Arsileus should be rewarded equally with Syrenus: But since I am now free from it, and wounded afresh with the loue of my betrothed Marcelius, for the paine which I suffer for his absence, I like well of that which Syreâˆ£nus did sing; and for the ioy and sweete delight which I expect, I also commend Arâˆ£sileus song. But take heed carelesse Syrenus, that these complaints which thou maâˆ£kest of Diana, be not like to those wherewith I blamed Marcelius, bicause thou maist not repent thee of thy hardnes of hart and disdaine, as I haue done. Syrenus smiled at this and said: What greater blame may be laide vpon that Shepherdesse, who after she had forsaken me, married her selfe to a iealous, peruerse, and vnfortunate husband. Then Alcida answered. Vnfortunate indeed he hath beene enough, since he cast his eies vpon me: and bicause it comes fit to the purpose, I will tell thee that, which yesterday (by reason of Felicias discourses and affaires with me) I could not declare vnto thee, when as we were talking about Dianas matters: and to this end especially, bicause thou mightest forget all iniuries past, and shake off thy wrongâˆ£full obliuion, when thou shalt vnderstand of the strange and vnluckie accident, that by my contempt befell to miserable Delius. I haue told thee before, how I was talâˆ£king and singing with Diana at the fountaine of the Sicamours, and how iealous Delius came thither, and sorrowfull Marcelius after him in a Shepherds habit, at whose sight I was so grieued, that I fled from him incoÌ„tinently into a wood that was hard by. But when I came to the other side of the wood, I heard a far off a voice that still cryed, Alcida, Oh Alcida, stay, stay: which made me to thinke that Marcelius folâˆ£lowed me; and bicause I would not fall into his hands, I ran as fast as I could away. But by that which afterwards happened, I knew that it was Delius, husband to Diâˆ£ana, that came running after me. And bicause I had run a great way, and began to be wearie, I then went so easily, that he followed me in sight. I knew him, and staied to know what he would haue, not thinking once of him, nor of the cause of his comming. And when he was before me, what by the faintnes of his running, and by the anguish of his minde that troubled him, he was not able to vtter one word. At the last with rude and ill formed reasons he said, that he was in loue with me, praying me after his homely manner to loue him againe, and many other things (I know not what) which shewed his little wit, and simple behauiour. To tell the very truth I laughed at him, and the best I could, endeuoured to comfort him, and to make him forget his folly, but it auailed nothing; for the more I disswaded him from it, the more foole he was. In faith (Shepherd) I sweare vnto thee, that I neuer knew man in my life so assotted with sudden loue. But as I went on my waies, and he following me at an inch, we came to a village a mile distant from his towne, and there, when he perceiued my rigour, & that I had flatly denied him, for verie griefe and anguish of minde he fell sicke. He was lodged there by a Shepherd that knew him, who as soone as morning came, certified his mother of his malladie. Delius mother came thither with a heauie hart in great haste, and found her sonne torâˆ£mented with a burning feauer. With much sorrow she lamented his case, and did