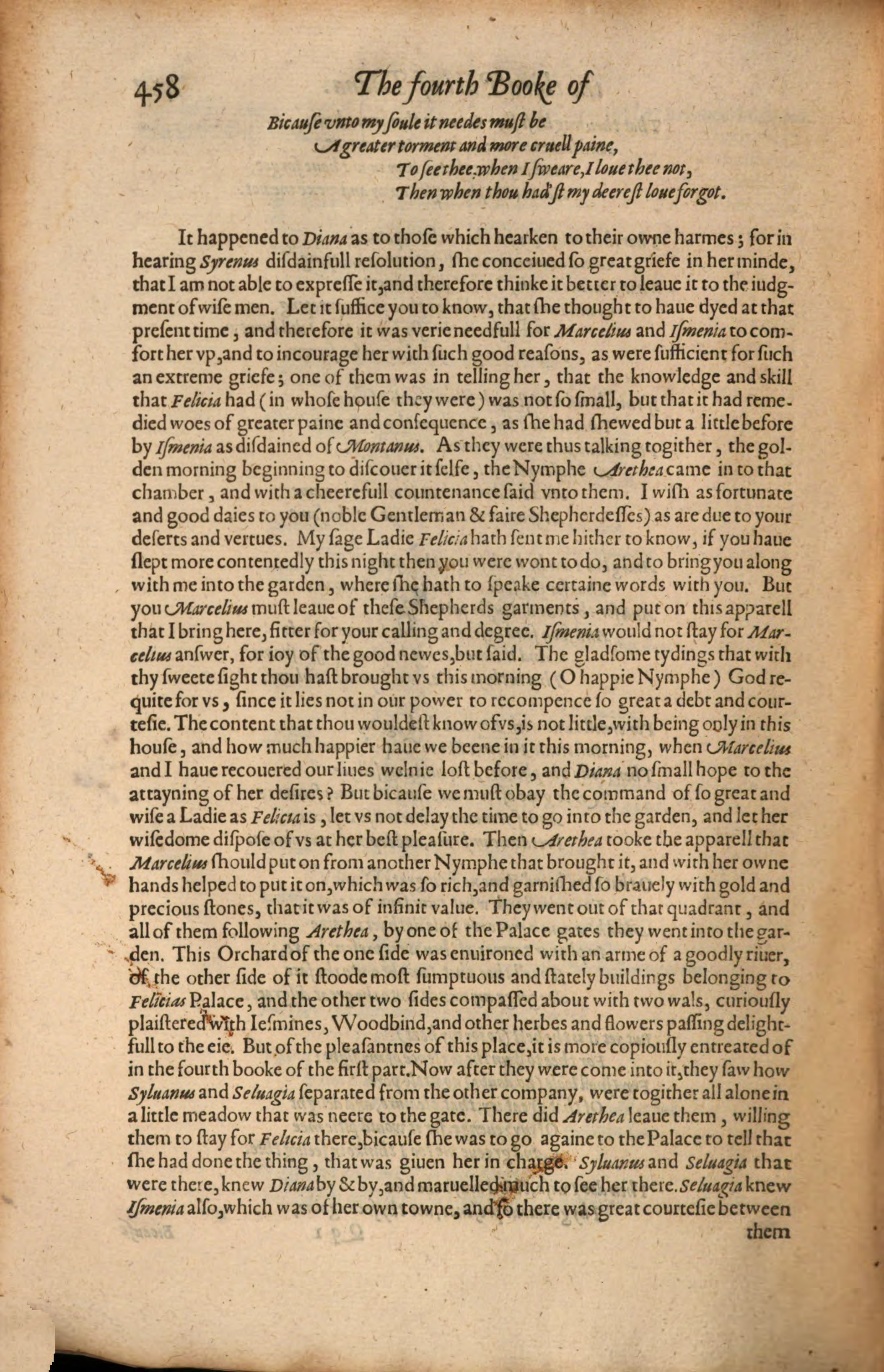 Bicause vnto my soule it needes must be
A greater torment and more cruell paine,
To see thee, when I sweare, I loue thee not,
Then when thou had’st my deerest loue forgot.

It happened to Diana as to those which hearken to their owne harmes; for in hearing Syrenus disdainfull resolution, she conceiued so great griefe in her minde, that I am not able to expresse it, and therefore thinke it better to leaue it to the iudgâˆ£ment of wise men. Let it suffice you to know, that she thought to haue dyed at that present time, and therefore it was verie needfull for Marcelius and Ismenia to comâˆ£fort her vp, and to incourage her with such good reasons, as were sufficient for such an extreme griefe; one of them was in telling her, that the knowledge and skill that Felicia had (in whose house they were) was not so small, but that it had remeâˆ£died woes of greater paine and consequence, as she had shewed but a little before by Ismenia as disdained of Montanus. As they were thus talking togither, the golâˆ£den morning beginning to discouer it selfe, the Nymphe Arethea came in to that chamber, and with a cheerefull countenance said vnto them. I wish as fortunate and good daies to you (noble Gentleman & faire Shepherdesses) as are due to your deserts and vertues. My sage Ladie Felicia hath sent me hither to know, if you haue slept more contentedly this night then you were wont to do, and to bring you along with me into the garden, where she hath to speake certaine words with you. But you Marcelius must leaue of these Shepherds garments, and put on this apparell that I bring here, fitter for your calling and degree. Ismenia would not stay for Marâˆ£celius answer, for ioy of the good newes, but said. The gladsome tydings that with thy sweete sight thou hast brought vs this morning (O happie Nymphe) God reâˆ£quite for vs, since it lies not in our power to recompence so great a debt and courâˆ£tesie. The content that thou wouldest know of vs, is not little, with being only in this house, and how much happier haue we beene in it this morning, when Marcelius and I haue recouered our liues welnie lost before, and Diana no small hope to the attayning of her desires? But bicause we must obay the command of so great and wise a Ladie as Felicia is, let vs not delay the time to go into the garden, and let her wisedome dispose of vs at her best pleasure. Then Arethea tooke the apparell that Marcelius should put on from another Nymphe that brought it, and with her owne hands helped to put it on, which was so rich, and garnished so brauely with gold and precious stones, that it was of infinit value. They went out of that quadrant, and all of them following Arethea, by one of the Palace gates they went into the garâˆ£den. This Orchard of the one side was enuironed with an arme of a goodly riuer, of the other side of it stoode most sumptuous and stately buildings belonging to Felicias Palace, and the other two sides compassed about with two wals, curiously plaistered with Iesmines, Woodbind, and other herbes and flowers passing delightâˆ£full to the eie. But of the pleasantnes of this place, it is more copiously entreated of in the fourth booke of the first part. Now after they were come into it, they saw how Syluanus and Seluagia separated from the other company, were togither all alone in a little meadow that was neere to the gate. There did Arethea leaue them, willing them to stay for Felicia there, bicause she was to go againe to the Palace to tell that she had done the thing, that was giuen her in charge. Syluanus and Seluagia that were there, knew Diana by & by, and maruelled much to see her there. Seluagia knew Ismenia also, which was of her own towne, and so there was great courtesie between