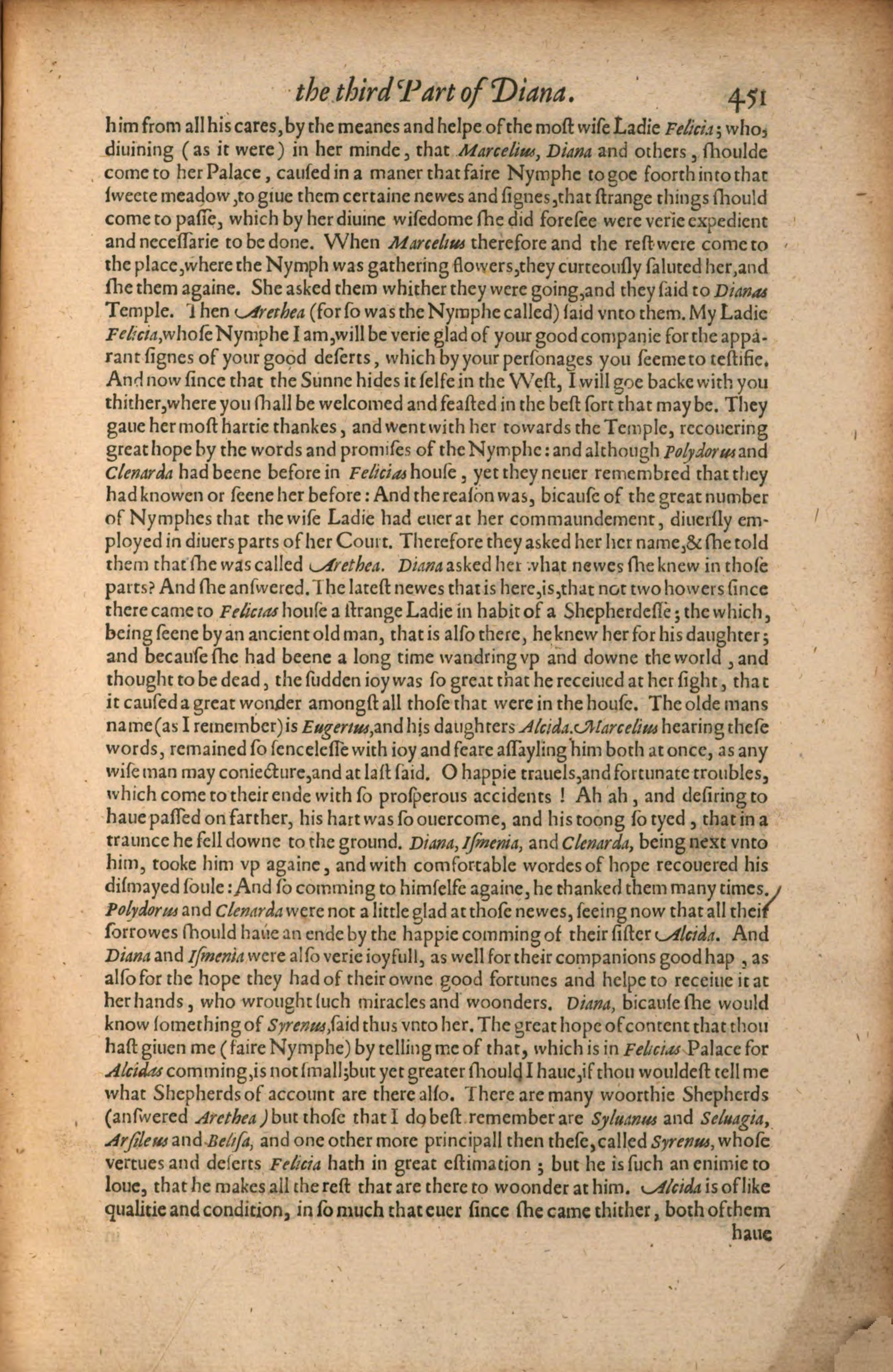 him from all his cares, by the meanes and helpe of most wise Ladie Felicia; who, diuining (as it were) in her minde, that Marcelius, Diana and others, shoulde come to her Palace, caused in a maner that faire Nymphe to goe foorth into that sweete meadow, to giue them certaine newes and signes, that strange things should come to passe, which by her diuine wisedome she did foresee were verie expedient and necessarie to be done. When Marcelius therefore and the rest were come to the place, where the Nymph was gathering flowers, they curteously saluted her, and she them againe. She asked them whither they were going, and they said to Dianas Temple. Then Arethea (for so was the Nymphe called) said vnto them. My Ladie Felicia, whose Nymphe I am, will be verie glad of your good companie for the appaâˆ£rant signes of your good deserts, which by your personages you seeme to testifie. And now since that the Sunne hides it selfe in the West, I will goe backe with you thither, where you shall be welcomed and feasted in the best sort that may be. They gaue her most hartie thankes, and went with her towards the Temple, recouering great hope by the words and promises of the Nymphe: and although Polydorus and Clenarda had beene before in Felicias house, yet they neuer remembred that they had knowen or seene her before: And the reason was, bicause of the great number of Nymphes that the wise Ladie had euer at her commaundement, diuersly emâˆ£ployed in diuers parts of her Court. Therefore they asked her her name, & she told them that she was called Arethea. Diana asked her what newes she knew in those parts? And she answered. The latest newes that is here, is, that not two howers since there came to Felicias house a strange Ladie in habit of a Shepherdesse; the which, being seene by an ancient old man, that is also there, he knew her for his daughter; and because she had beene a long time wandring vp and downe the world, and thought to be dead, the sudden ioy was so great that he receiued at her sight, that it caused a great wonder amongst all those that were in the house. The olde mans name (as I remember) is Eugertus, and his daughters Alcida. Marcelius hearing these words, remained so sencelesse with ioy and feare assayling him both at once, as any wise man may coniecture, and at last said. O happie trauels, and fortunate troubles, which come to their ende with so prosperous accidents! Ah ah, and desiring to haue passed on farther, his hart was so ouercome, and his toong so tyed, that in a traunce he fell downe to the ground. Diana, Ismenia, and Clenarda, being next vnto him, tooke him vp againe, and with comfortable wordes of hope recouered his dismayed soule: And so comming to himselfe againe, he thanked them many times. Polydorus and Clenarda were not a little glad at those newes, seeing now that all their sorrowes should haue an ende by the happie comming of their sister Alcida. And Diana and Ismenia were also verie ioyfull, as well for their companions good hap, as also for the hope they had of their owne good fortunes and helpe to receiue it at her hands, who wrought such miracles and woonders. Diana, bicause she would know something of Syrenus, said thus vnto her. The great hope of content that thou hast giuen me (faire Nymphe) by telling me of that, which is in Felicias Palace for Alcidas comming, is not small; but yet greater should I haue, if thou wouldest tell me what Shepherds of account are there also. There are many woorthie Shepherds (answered Arethea) but those that I do best remember are Syluanus and Seluagia, Arsileus and Belisa, and one other more principall then these, called Syrenus, whose vertues and deserts Felicia hath in great estimation; but he is such an enimie to loue, that he makes all the rest that are there to woonder at him. Alcida is of like qualitie and condition, in so much that euer since she came thither, both of them