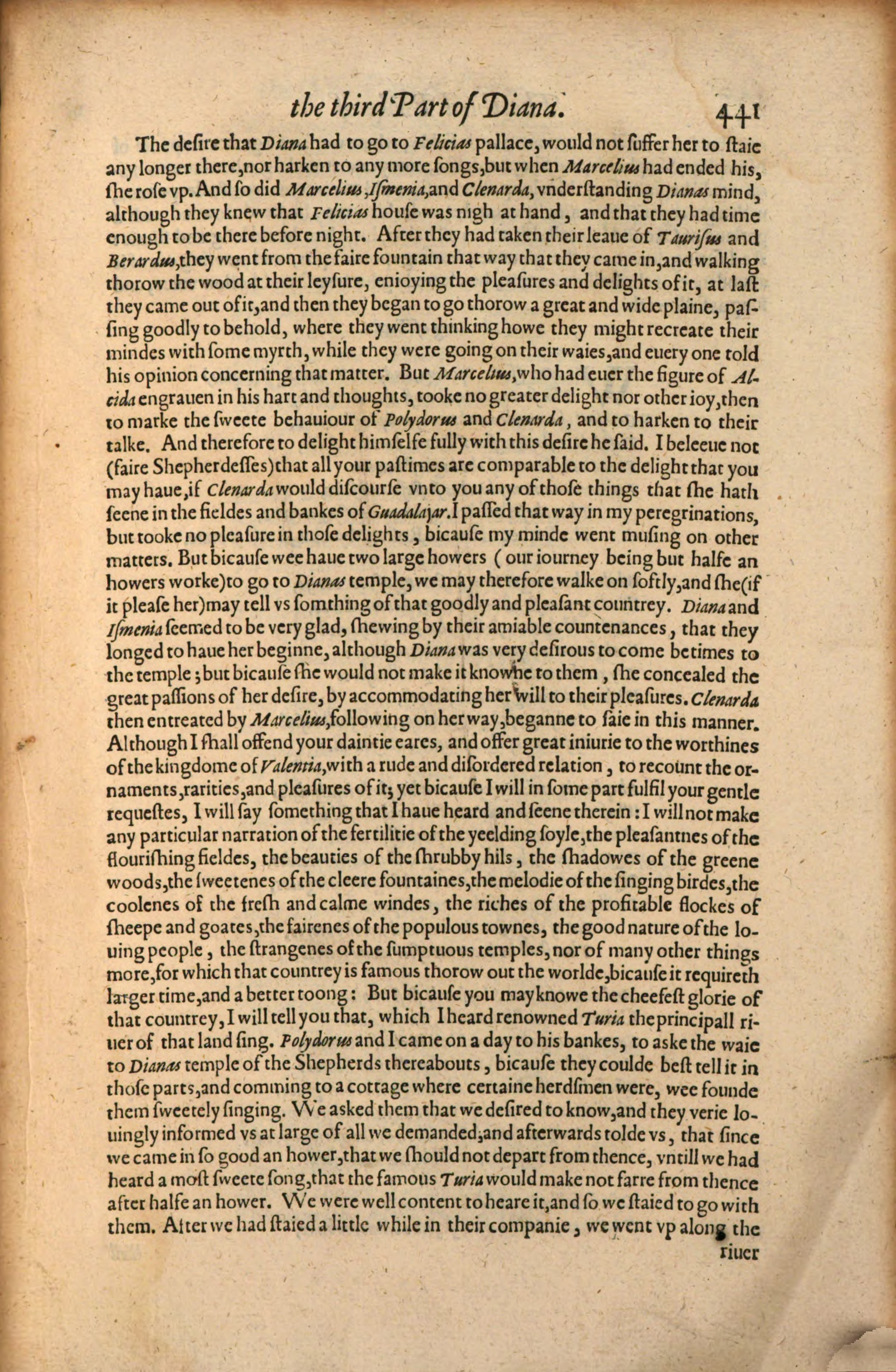 The desire that Diana had to go to Felicias pallace, would not suffer her to staie any longer there, nor harken to any more songs, but when Marcelius had ended his, she rose vp. And so did Marcelius, Ismenia, and Clenarda, vnderstanding Dianas mind, although they knew that Felicias house was nigh at hand, and that they had time enough to be there before night. After they had taken their leaue of Taurisus and Berardus, they went from the faire fountain that way that they came in, and walking thorow the wood at their leysure, enioying the pleasures and delights of it, at last they came out of it, and then they began to go thorow a great and wide plaine, pasâˆ£sing goodly to behold, where they went thinking howe they might recreate their mindes with some myrth, while they were going on their waies, and euery one told his opinion concerning that matter. But Marcelius, who had euer the figure of Alâˆ£cida engrauen in his hart and thoughts, tooke no greater delight nor other ioy, then to marke the sweete behauiour of Polydorus and Clenarda, and to harken to their talke. And therefore to delight himselfe fully with this desire he said. I beleeue not (faire Shepherdesses) that all your pastimes are comparable to the delight that you may haue, if Clenarda would discourse vnto you any of those things that she hath seene in the fieldes and bankes of Guadalajar. I passed that way in my peregrinations, but tooke no pleasure in those delights, bicause my minde went musing on other matters. But bicause wee haue two large howers (our iourney being but halfe an howers worke) to go to Dianas temple, we may therefore walke on softly, and she (if it please her) may tell vs somthing of that goodly and pleasant countrey. Diana and Ismenia seemed to be very glad, shewing by their amiable countenances, that they longed to haue her beginne, although Diana was very desirous to come betimes to the temple; but bicause she would not make it knowne to them, she concealed the great passions of her desire, by accommodating her will to their pleasures. Clenarda then entreated by Marcelius, following on her way, beganne to saie in this manner. Although I shall offend your daintie eares, and offer great iniurie to the worthines of the kingdome of Valentia, with a rude and disordered relation, to recount the orâˆ£naments, rarities, and pleasures of it; yet bicause I will in some part fulfil your gentle requestes, I will say something that I haue heard and seene therein: I will not make any particular narration of the fertilitie of the yeelding soyle, the pleasantnes of the flourishing fieldes, the beauties of the shrubby hils, the shadowes of the greene woods, the sweetenes of the cleere fountaines, the melodie of the singing birdes, the coolenes of the fresh and calme windes, the riches of the profitable flockes of sheepe and goates, the fairenes of the populous townes, the good nature of the loâˆ£uing people, the strangenes of the sumptuous temples, nor of many other things more, for which that countrey is famous thorow out the worlde, bicause it requireth larger time, and a better toong: But bicause you may knowe the cheefest glorie of that countrey, I will tell you that, which I heard renowned Turia the principall riâˆ£uer of that land sing. Polydorus and I came on a day to his bankes, to aske the waie to Dianas temple of the Shepherds thereabouts, bicause they coulde best tell it in those parts, and comming to a cottage where certaine herdsmen were, wee founde them sweetely singing. We asked them that we desired to know, and they verie loâˆ£uingly informed vs at large of all we demanded, and afterwards tolde vs, that since we came in so good an hower, that we should not depart from thence, vntill we had heard a most sweete song, that the famous Turia would make not farre from thence after halfe an hower. We were well content to heare it, and so we staied to go with them. After we had staied a little while in their companie, we went vp along the