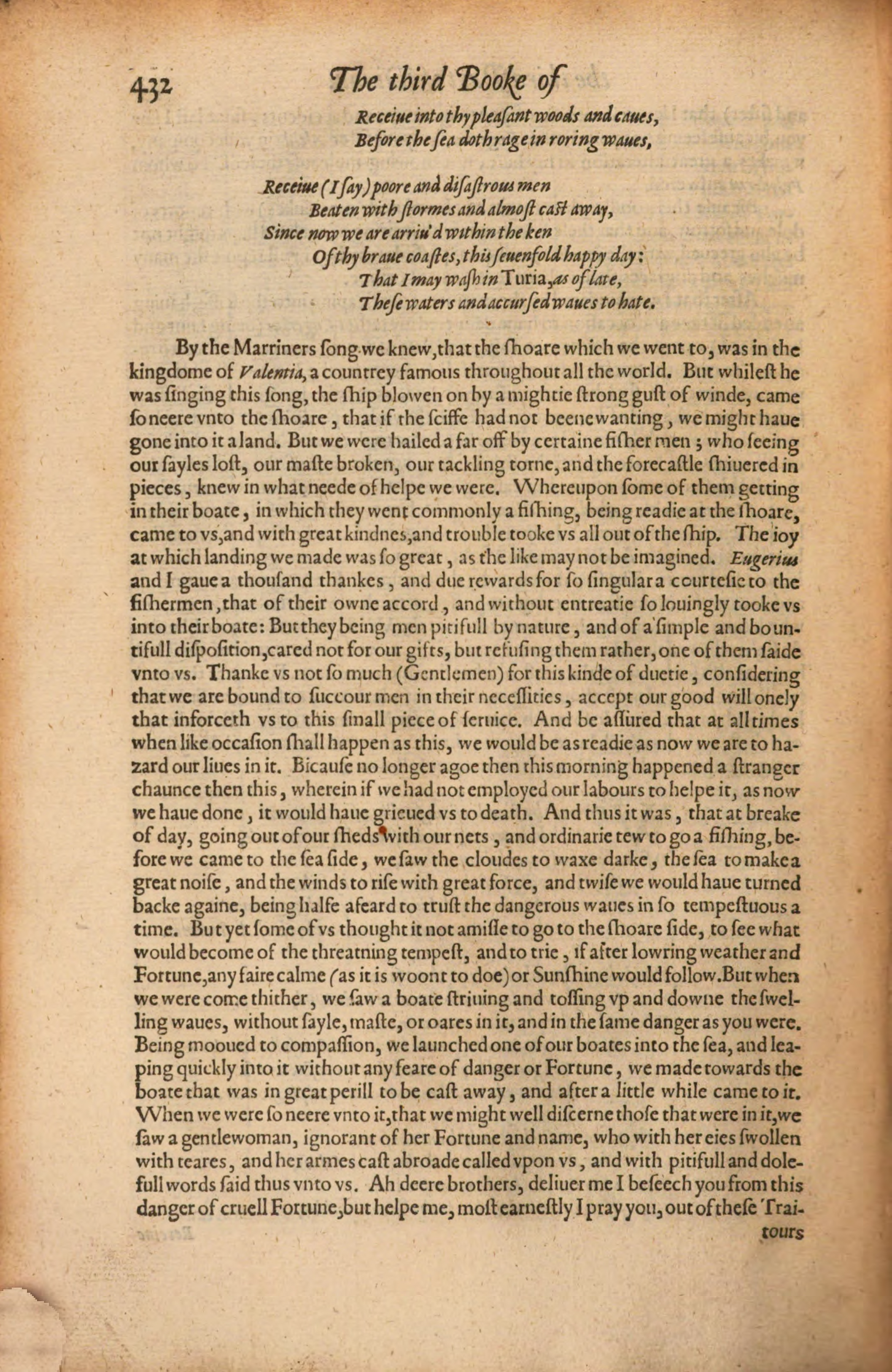 Receiue into thy pleasant woods and caues,
Before the sea doth rage in roring waues,
Receiue (I say) poore and disastrous men
Beaten with stormes and almost cast away,
Since now we are arriu’d within the ken
Of thy braue coastes, this seuenfold happy day:
That I may wash in Turia, as of late,
These waters and accur sed waues to hate.

By the Marriners song we knew, that the shoare which we went to, was in the kingdome of Valentia, a countrey famous throughout all the world. But whilest he was singing this song, the ship blowen on by a mightie strong gust of winde, came so neere vnto the shoare, that if the sciffe had not beene wanting, we might haue gone into it a land. But we were hailed a far off by certaine fisher men; who seeing our sayles loft, our maste broken, our tackling torne, and the forecastle shiuered in pieces, knew in what neede of helpe we were. Whereupon some of them getting in their boate, in which they went commonly a fishing, being readie at the shoare, came to vs, and with great kindnes, and trouble tooke vs all out of the ship. The ioy at which landing we made was so great, as the like may not be imagined. Eugerius and I gaue a thousand thankes, and due rewards for so singular a courtesie to the fishermen, that of their owne accord, and without entreatie so louingly tooke vs into their boate: But they being men pitifull by nature, and of a simple and boun|tifull disposition, cared not for our gifts, but refusing them rather, one of them saide vnto vs. Thanke vs not so much (Gentlemen) for this kinde of duetie, considering that we are bound to succour men in their necessities, accept out good will onely that inforceth vs to this small piece of seruice. And be assured that at all times when like occasion shall happen as this, we would be as readie as now we are to ha|zard our liues in it. Bicause no longer agoe then this morning happened a stranger chaunce then this, wherein if we had not employed our labours to helpe it, as now we haue done, it would haue grieued vs to death. And thus it was, that at breake of day, going out of our sheds with our nets, and ordinarie tew to go a fishing, be|fore we came to the sea side, we saw the cloudes to waxe darke, the sea to make a great noise, and the winds to rise with great force, and twise we would haue turned backe againe, being halfe afeard to trust the dangerous waues in so tempestuous a time. But yet some of vs thought it not amisse to go to the shoare side, to see what would become of the threatning tempest, and to trie, if after lowring weather and Fortune, any faire calme (as it is woont to doe) or Sunshine would follow. But when we were come thither, we saw a boate striuing and tossing vp and downe the swel|ling waues, without sayle, maste, or oares in it, and in the same danger as you were. Being mooued to compassion, we launched one of our boates into the sea, and lea|ping quickly into it without any feare of danger of Fortune, we made towards the boate that was in great perill to be cast away, and after a little while came to it. When we were so neere vnto it, that we might well discerne those that were in it, we saw a gentlewoman, ignorant of her Fortune and name, who with her eies swollen with teares, and her armes cast abroade called vpon vs, and with pitifull and dole|full words said thus vnto vs. Ah deere brothers, deliuer me I beseech you from this danger of cruell Fortune, but helpe me, most earnestly I pray you, out of these Traitours