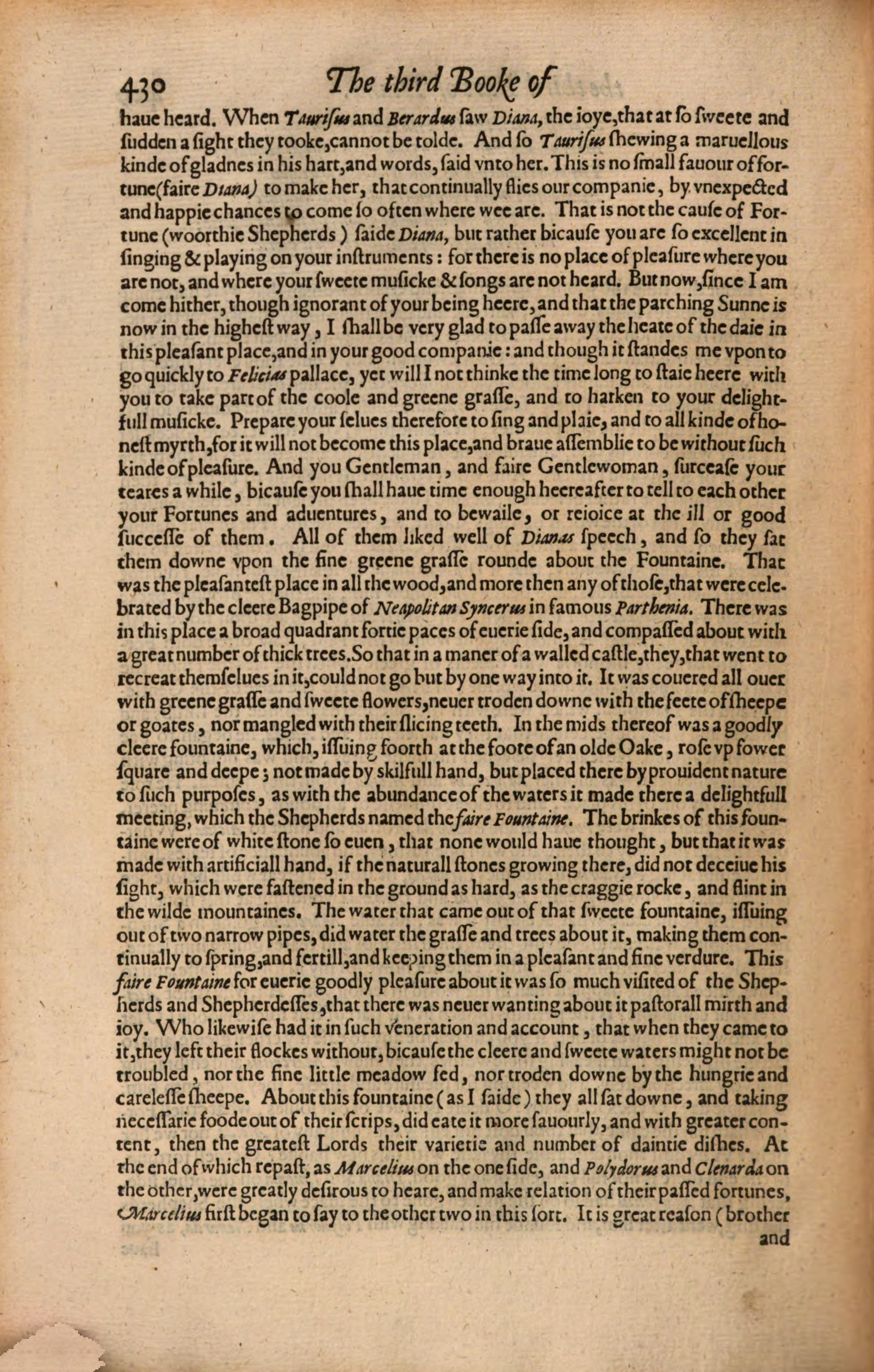 haue heard. When Taurisus and Berardus saw Diana, the ioye, that at so sweete and sudden a sight they tooke, cannot be tolde. And so Taurisus shewing a maruellous kinde of gladnes in his hart, and words, said vnto her. This is no small fauour of forâˆ£tune (faire Diana) to make her, that continually flies our companie, by vnexpected and happie chances to come so often where wee are. That is not the cause of Forâˆ£tune (woorthie Shepherds) saide Diana, but rather bicause you are so excellent in singing & playing on your instruments: for there is no place of pleasure where you are not, and where your sweete musicke & songs are not heard. But now, since I am come hither, though ignorant of your being heere, and that the parching Sunne is now in the highest way, I shall be very glad to passe away the heate of the daie in this pleasant place, and in your good companie: and though it standes me vpon to go quickly to Felicias pallace, yet will I not thinke the time long to staie heere with you to take part of the coole and greene grasse, and to harken to your delightâˆ£full musicke. Prepare your selues therefore to sing and plaie, and to all kinde of hoâˆ£nest myrth, for it will not become this place, and braue assemblie to be without such kinde of pleasure. And you Gentleman, and faire Gentlewoman, surcease your teares a while, bicause you shall haue time enough heereafter to tell to each other your Fortunes and aduentures, and to bewaile, or reioice at the ill or good successe of them. All of them liked well of Dianas speech, and so they sat them downe vpon the fine greene grasse rounde about the Fountaine. That was the pleasantest place in all the wood, and more then any of those, that were celeâˆ£brated by the cleere Bagpipe of Neapolitan Syncerus in famous Parthenia. There was in this place a broad quadrant fortie paces of euerie side, and compassed about with a great number of thick trees. So that in a maner of a walled castle, they, that went to recreat themselues in it, could not go but by one way into it. It was couered all ouer with greene grasse and sweete flowers, neuer troden downe with the feete of sheepe or goates, nor mangled with their slicing teeth. In the mids thereof was a goodly cleere fountaine, which, issuing foorth at the foote of an olde Oake, rose vp fower square and deepe; not made by skilfull hand, but placed there by prouident nature to such purposes, as with the abundance of the waters it made there a delightfull meeting, which the Shepherds named the faire Fountaine. The brinkes of this founâˆ£taine were of white stone so euen, that none would haue thought, but that it was made with artificiall hand, if the naturall stones growing there, did not deceiue his sight, which were fastened in the ground as hard, as the craggie rocke, and flint in the wilde mountaines. The water that came out of that sweete fountaine, issuing out of two narrow pipes, did water the grasse and trees about it, making them conâˆ£tinually to spring, and fertill, and keeping them in a pleasant and fine verdure. This faire Fountaine for euerie goodly pleasure about it was so much visited of the Shepâˆ£herds and Shepherdesses, that there was neuer wanting about it pastorall mirth and ioy. Who likewise had it in such veneration and account, that when they came to it, they left their flockes without, bicause the cleere and sweete waters might not be troubled, nor the fine little meadow fed, nor troden downe by the hungrie and carelesse sheepe. About this fountaine (as I saide) they all sat downe, and taking necessarie foode out of their scrips, did eate it more sauourly, and with greater conâˆ£tent, then the greatest Lords their varietie and number of daintie dishes. At the end of which repast, as Marcelius on the one side, and Polydorus and Clenarda on the other, were greatly desirous to heare, and make relation of their passed fortunes, Marcelius first began to say to the other two in this sort. It is great reason (brother