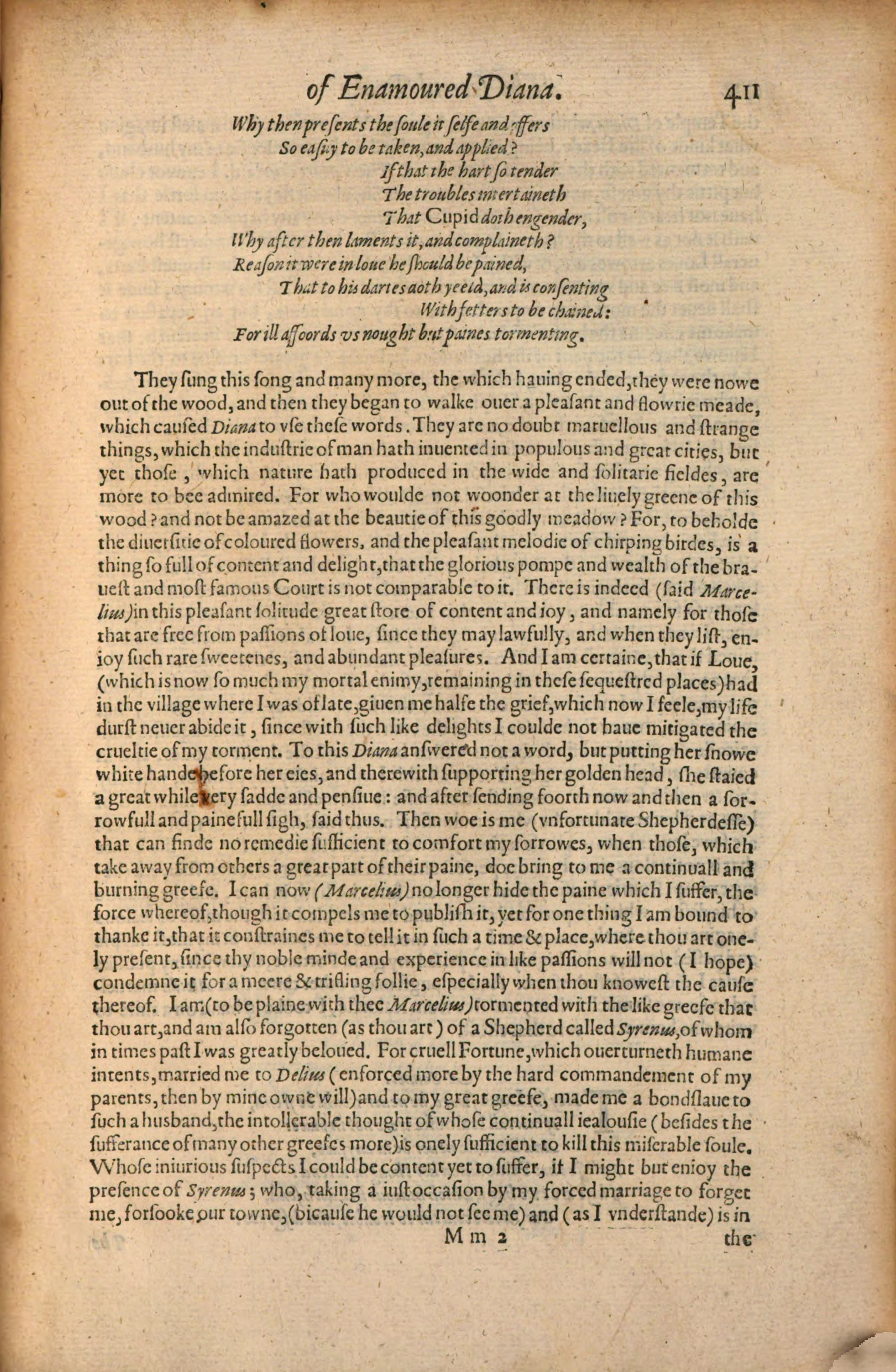 Why then presents the soule it selfe and offers
So easily to be taken, and applied?
If that the hart so tender
The troubles intertaineth
That Cupid doth engender,
Why after then laments it, and complaineth?
Reason it were in loue he should be pained,
That to his dartes doth yeeld, and is consenting
With fetters to be chained:
For ill affoords vs nought but paines tormenting.

They sung this song and many more, the which hauing ended, they were nowe out of the wood, and then they began to walke ouer a pleasant and flowrie meade, which caused Diana to vse these words. They are no doubt maruellous and strange things, which the industrie of man hath inuented in populous and great cities, but yet those, which nature hath produced in the wide and solitarie fieldes, are more to bee admired. For who woulde not woonder at the liuely greene of this wood? and not be amazed at the beautie of this goodly meadow? For, to beholde the diuersitie of coloured flowers, and the pleasant melodie of chirping birdes, is a thing so full of content and delight, that the glorious pompe and wealth of the braâˆ£uest and most famous Court is not comparable to it. There is indeed (said Marceâˆ£lius) in this pleasant solitude great store of content and ioy, and namely for those that are free from passions of loue, since they may lawfully, and when they list, enâˆ£ioy such rare sweetenes, and abundant pleasures. And I am certaine, that if Loue, (which is now so much my mortal enimy, remaining in these sequestred places) had in the village where I was of late, giuen me halfe the grief, which now I feele, my life durst neuer abide it, since with such like delights I coulde not haue mitigated the crueltie of my torment. To this Diana answered not a word, but putting her snowe white hande before her eies, and therewith supporting her golden head, she staied a great while very sadde and pensiue: and after sending foorth now and then a sorâˆ£rowfull and painefull sigh, said thus. Then woe is me (vnfortunate Shepherdesse) that can finde no remedie sufficient to comfort my sorrowes, when those, which take away from others a great part of their paine, doe bring to me a continuall and burning greefe. I can now (Marcelius) no longer hide the paine which I suffer, the force whereof, though it compels me to publish it, yet for one thing I am bound to thanke it, that it constraines me to tell it in such a time & place, where thou art oneâˆ£ly present, since thy noble minde and experience in like passions will not (I hope) condemne it for a meere & trifling follie, especially when thou knowest the cause thereof. I am (to be plaine with thee Marcelius) tormented with the like greefe that thou art, and am also forgotten (as thou art) of a Shepherd called Syrenus, of whom in times past I was greatly beloued. For cruell Fortune, which ouerturneth humane intents, married me to Delius (enforced more by the hard commandement of my parents, then by mine owne will) and to my great greefe, made me a bondslaue to such a husband, the intollerable thought of whose continuall iealousie (besides the sufferance of many other greefes more) is onely sufficient to kill this miserable soule. Whose iniurious suspects I could be content yet to suffer, if I might but enioy the presence of Syrenus; who, taking a iust occasion by my forced marriage to forget me, forsooke our towne, (bicause he would not see me) and (as I vnderstande) is in