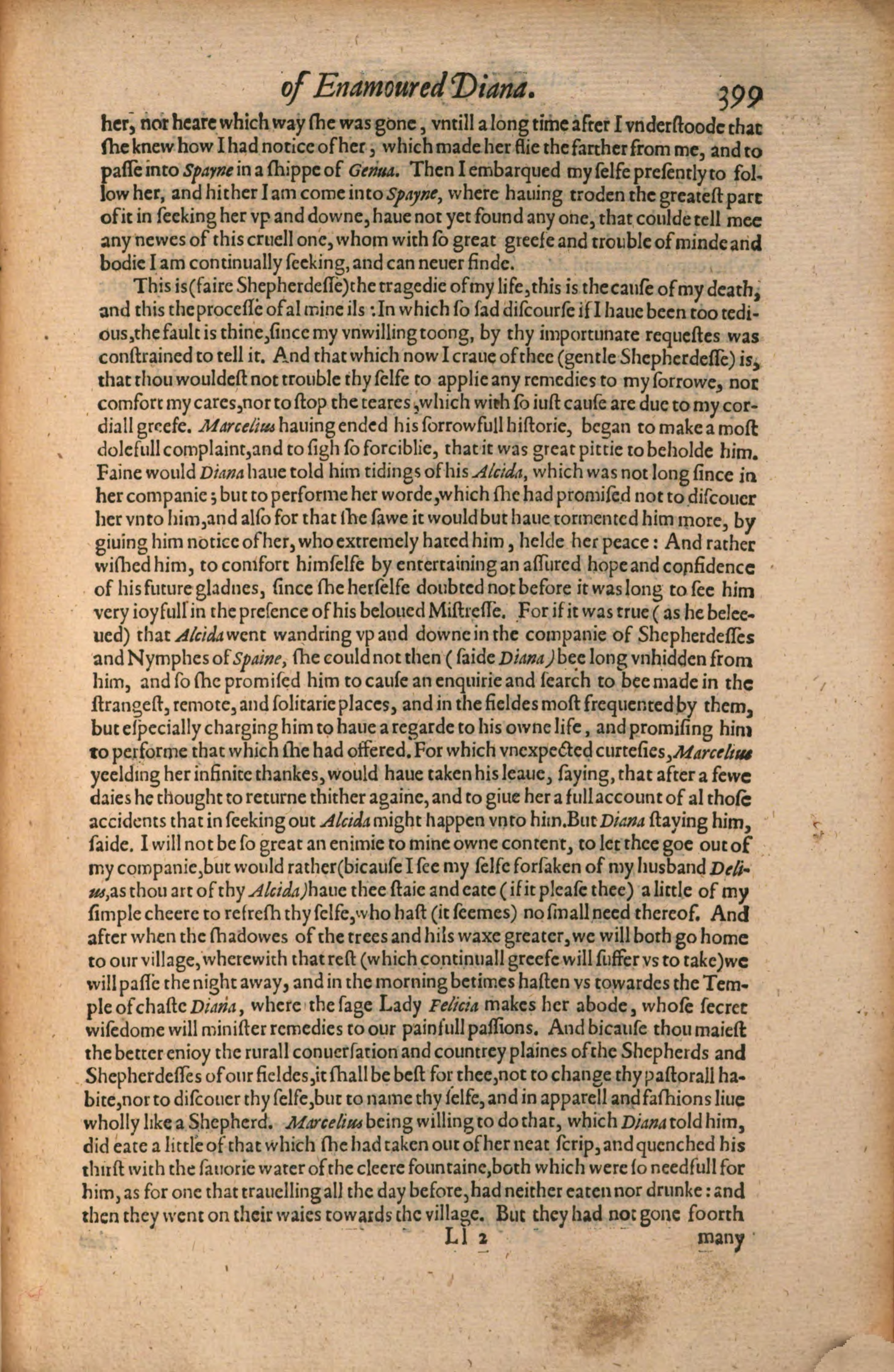 her, nor heare which way she was gone, vntill a long time after I vnderstoode that she knew how I had notice of her, which made her flie the farther from me, and to passe into Spayne in a shippe of Genua. Then I embarqued my selfe presently to folâˆ£low her, and hither I am come into Spayne, where hauing troden the greatest part of it in seeking her vp and downe, haue not yet found any one, that coulde tell mee any newes of this cruell one, whom with so great greefe and trouble of minde and bodie I am continually seeking, and can neuer finde.
This is (faire Shepherdesse) the tragedie of my life, this is the cause of my death, and this the processe of al mine ils: In which so sad discourse if I haue been too tediâˆ£ous, the fault is thine, since my vnwilling toong, by thy importunate requestes was constrained to tell it. And that which now I craue of thee (gentle Shepherdesse) is, that thou wouldest not trouble thy selfe to applie any remedies to my sorrowe, nor comfort my cares, nor to stop the teares, which with so iust cause are due to my corâˆ£diall greefe. Marcelius hauing ended his sorrowfull historie, began to make a most dolefull complaint, and to sigh so forciblie, that it was great pittie to beholde him. Faine would Diana haue told him tidings of his Alcida, which was not long since in her companie; but to performe her worde, which she had promised not to discouer her vnto him, and also for that she sawe it would but haue tormented him more, by giuing him notice of her, who extremely hated him, helde her peace: And rather wished him, to comfort himselfe by entertaining an assured hope and confidence of his future gladnes, since she herselfe doubted not before it was long to see him very ioyfull in the presence of his beloued Mistresse. For if it was true (as he beleeâˆ£ued) that Alcida went wandring vp and downe in the companie of Shepherdesses and Nymphes of Spaine, she could not then (saide Diana) bee long vnhidden from him, and so she promised him to cause an enquirie and search to bee made in the strangest, remote, and solitarie places, and in the fieldes most frequented by them, but especially charging him to haue a regarde to his owne life, and promising him to performe that which she had offered. For which vnexpected curtesies, Marcelius yeelding her infinite thankes, would haue taken his leaue, saying, that after a fewe daies he thought to returne thither againe, and to giue her a full account of al those accidents that in seeking out Alcida might happen vnto him. But Diana staying him, saide. I will not be so great an enimie to mine owne content, to let thee goe out of my companie, but would rather (bicause I see my selfe forsaken of my husband Deliâˆ£us, as thou art of thy Alcida) haue thee staie and eate (if it please thee) a little of my simple cheere to refresh thy selfe, who hast (it seemes) no small need thereof. And after when the shadowes of the trees and hils waxe greater, we will both go home to our village, wherewith that rest (which continuall greefe will suffer vs to take) we will passe the night away, and in the morning betimes hasten vs towardes the Temâˆ£ple of chaste Diana, where the sage Lady Felicia makes her abode, whose secret wisedome will minister remedies to our painfull passions. And bicause thou maiest the better enioy the rurall conuersation and countrey plaines of the Shepherds and Shepherdesses of our fieldes, it shall be best for thee, not to change thy pastorall haâˆ£bite, nor to discouer thy selfe, but to name thy selfe, and in apparell and fashions liue wholly like a Shepherd. Marcelius being willing to do that, which Diana told him, did eate a little of that which she had taken out of her neat scrip, and quenched his thirst with the sauorie water of the cleere fountaine, both which were so needfull for him, as for one that trauelling all the day before, had neither eaten nor drunke: and then they went on their waies towards the village. But they had not gone foorth