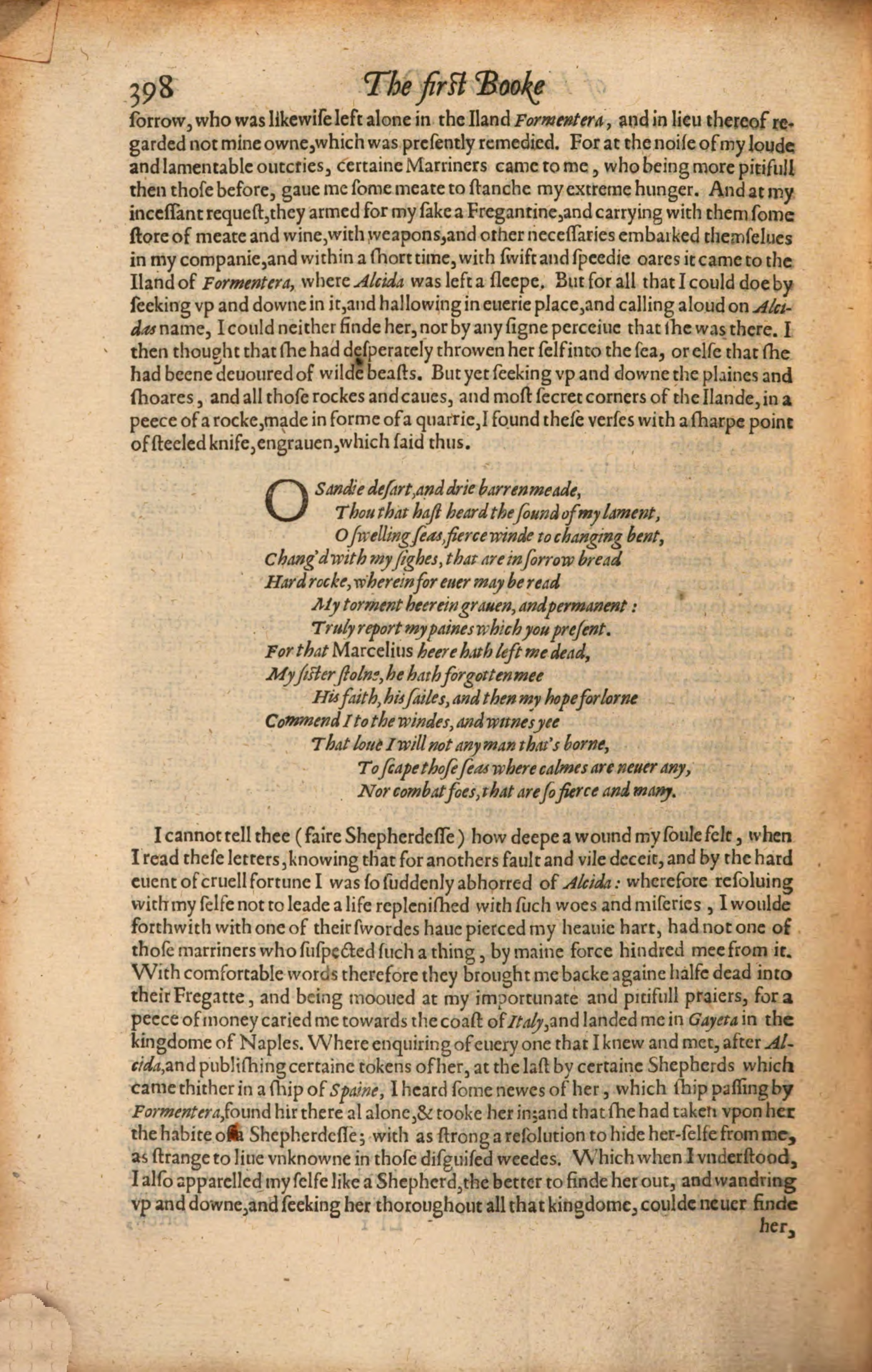 sorrow, who was likewise left alone in the Iland Formentera, and in lieu thereof reâˆ£garded not mine owne, which was presently remedied. For at the noise of my loude and lamentable outcries, certaine Marriners came to me, who being more pitifull then those before, gaue me some meate to stanche my extreme hunger. And at my incessant request, they armed for my sake a Fregantine, and carrying with them some store of meate and wine, with weapons, and other necessaries embarked themselues in my companie, and within a short time, with swift and speedie oares it came to the Iland of Formentera, where Alcida was left a sleepe. But for all that I could doe by seeking vp and downe in it, and hallowing in euerie place, and calling aloud on Alciâˆ£das name, I could neither finde her, nor by any signe perceiue that she was there. I then thought that she had desperately throwen her self into the sea, or else that she had beene deuoured of wilde beasts. But yet seeking vp and downe the plaines and shoares, and all those rockes and caues, and most secret corners of the Ilande, in a peece of a rocke, made in forme of a quarriâ€¢â€¦ found these verses with a sharpe point of steeled knife, engrauen, which said thus.

O Sandie desart, and drie barren meade,
Thou that hast heard the sound of my lament,
O swelling seas fierce winde to changing bent,
Chang’d with my sighes, that are in sorrow bread
Hard recke, wherein for euer may be read
My torment heerein grauen, and permanent:
Truly report my paines which you present.
For that Marcelius heere hath left me dead,
My sister stolne, he hath forgotten mee
His faith, his sailes, and then my hope forlorne
Commend I to the windes, and witnes yee
That loue I will not any man that’s borne,
To scape those seas where calmes are neuer any,
Nor combat foes, that are so fierce and many.

I cannot tell thee (faire Shepherdesse) how deepe a wound my soule felt, when I read these letters, knowing that for anothers fault and vile deceit, and by the hard euent of cruell fortune I was so suddenly abhorred of Alcida: wherefore resoluing with my selfe not to lead a life replenished with such woes and miseries, I woulde forthwith with one of their swordes haue pierced my heauie hart, had not one of those marriners who suspected such a thing, by maine force hindred mee from it. With comfortable words therefore they brought me backe againe halfe dead into their Fregatte, and being mooued at my importunate and pitifull praiers, for a peece of money caried me towards the coast of Italy, and landed me in Gayeta in the kingdome of Naples. Where enquiring of euery one that I knew and met, after Alâˆ£cida, and publishing certaine tokens of her, at the last by certaine Shepherds which came thither in a ship of Spaine, I heard some newes of her, which ship passing by Formentera, found hir there al alone, & tooke her in; and that she had taken vpon her the habite of a Shepherdesse; with as strong a resolution to hide her-selfe from me, as strange to liue vnknowne in those disguised weedes. Which when I vnderstood, I also apparelled my selfe like a Shepherd, the better to finde her out, and wandring vp and downe, and seeking her thoroughout all that kingdome, coulde neuer finde