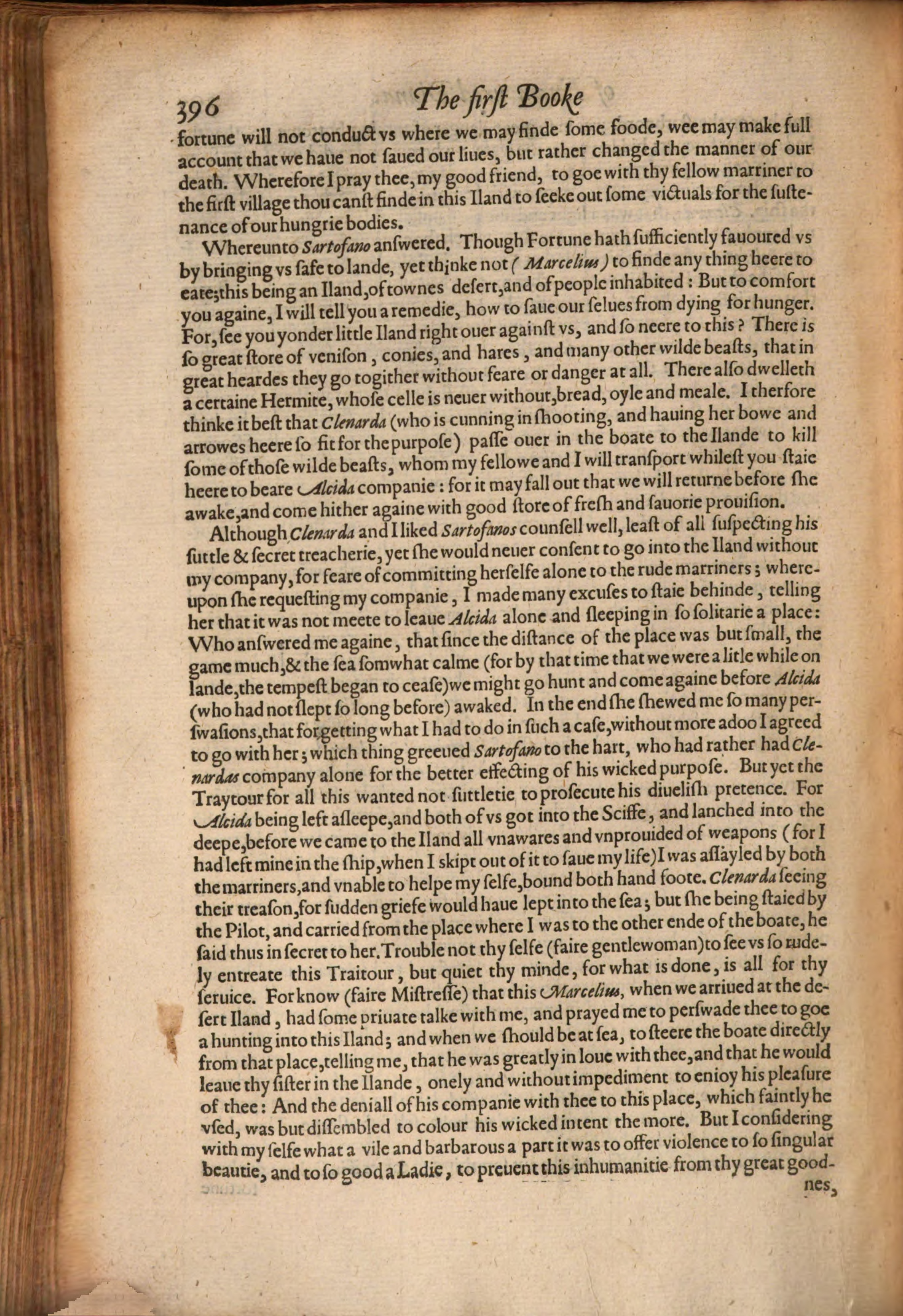 fortune will not conduct vs where we may finde some foode, wee may make full account that we haue not saued our liues, but rather changed the manner of our death. Wherefore I pray thee, my good friend, to goe with thy fellow marriner to the first village thou canst finde in this Iland to seeke out some victuals for the susteâˆ£nance of our hungrie bodies.
Whereunto Sartofano answered. Though Fortune hath sufficiently fauoured vs by bringing vs safe to lande, yet thinke not (Marcelius) to finde any thing heere to eate; this being an Iland, of townes desert, and of people inhabited: But to comfort you againe, I will tell you a remedie, how to saue our selues from dying for hunger. For, see you yonder little Iland right ouer against vs, and so neere to this? There is so great store of venison, conies, and hares, and many other wilde beasts, that in great heardes they go togither without feare or danger at all. There also dwelleth a certaine Hermite, whose celle is neuer without, bread, oyle and moale. I therfore thinke it best that Clenarda (who is cunning in shooting, and hauing her bowe and arrowes heere so fit for the purpose) passe ouer in the boate to the Ilande to kill some of those wilde beasts, whom my fellowe and I will transport whilest you staie heere to beare Alcida companie: for it may fall out that we will returne before she awake, and come hither againe with good store of fresh and sauorie prouision.
Although Clenarda and I liked Sartofanos counsell well, least of all suspecting his suttle & secret treacherie, yet she would neuer consent to go into the Iland without my company, for seare of committing herselfe alone to the rude marriners; whereâˆ£upon she requesting my companie, I made many excuses to staie behinde, telling her that it was not meete to leaue Alcida alone and sleeping in so solitarie a place: Who answered me againe, that since the distance of the place was but small, the game much, & the sea somwhat calme (for by that time that we were a litle while on lande, the tempest began to cease) we might go hunt and come againe before Alcida (who had not slept so long before) awaked. In the end she shewed me so many perâˆ£swasions, that forgetting what I had to do in such a case, without more adoo I agreed to go with her; which thing greeued Sartofano to the hart, who had rather had Cleâˆ£nardas company alone for the better effecting of his wicked purpose. But yet the Traytour for all this wanted not suttletie to prosecute his diuelish pretence. For Alcida being left asleepe, and both of vs got into the Sciffe, and lanched into the deepe, before we came to the Iland all vnawares and vnprouided of weapons (for I had left mine in the ship, when I skipt out of it to saue my life) I was assayled by both the marriners, and vnable to helpe my selfe, bound both hand foote. Clenarda seeing their treason, for sudden griefe would haue lept into the sea; but she being staied by the Pilot, and carried from the place where I was to the other ende of the boate, he said thus in secret to her. Trouble not thy selfe (faire gentlewoman) to see vs so rudeâˆ£ly entreate this Traitour, but quiet thy minde, for what is done, is all for thy seruice. For know (faire Mistresse) that this Marcelius, when we arriued at the deâˆ£sert Iland, had some priuate talke with me, and prayed me to perswade thee to goe a hunting into this Iland; and when we should be at sea, to steere the boate directly from that place, telling me, that he was greatly in loue with thee, and that he would leaue thy sister in the Ilande, onely and without impediment to enioy his pleasure of thee: And the deniall of his companie with thee to this place, which faintly he vsed, was but dissembled to colour his wicked intent the more. But I considering with my selfe what a vile and barbarous a part it was to offer violence to so singular beautie, and to so good a Ladie, to preuent this inhumanitie from thy great goodâˆ£nes,