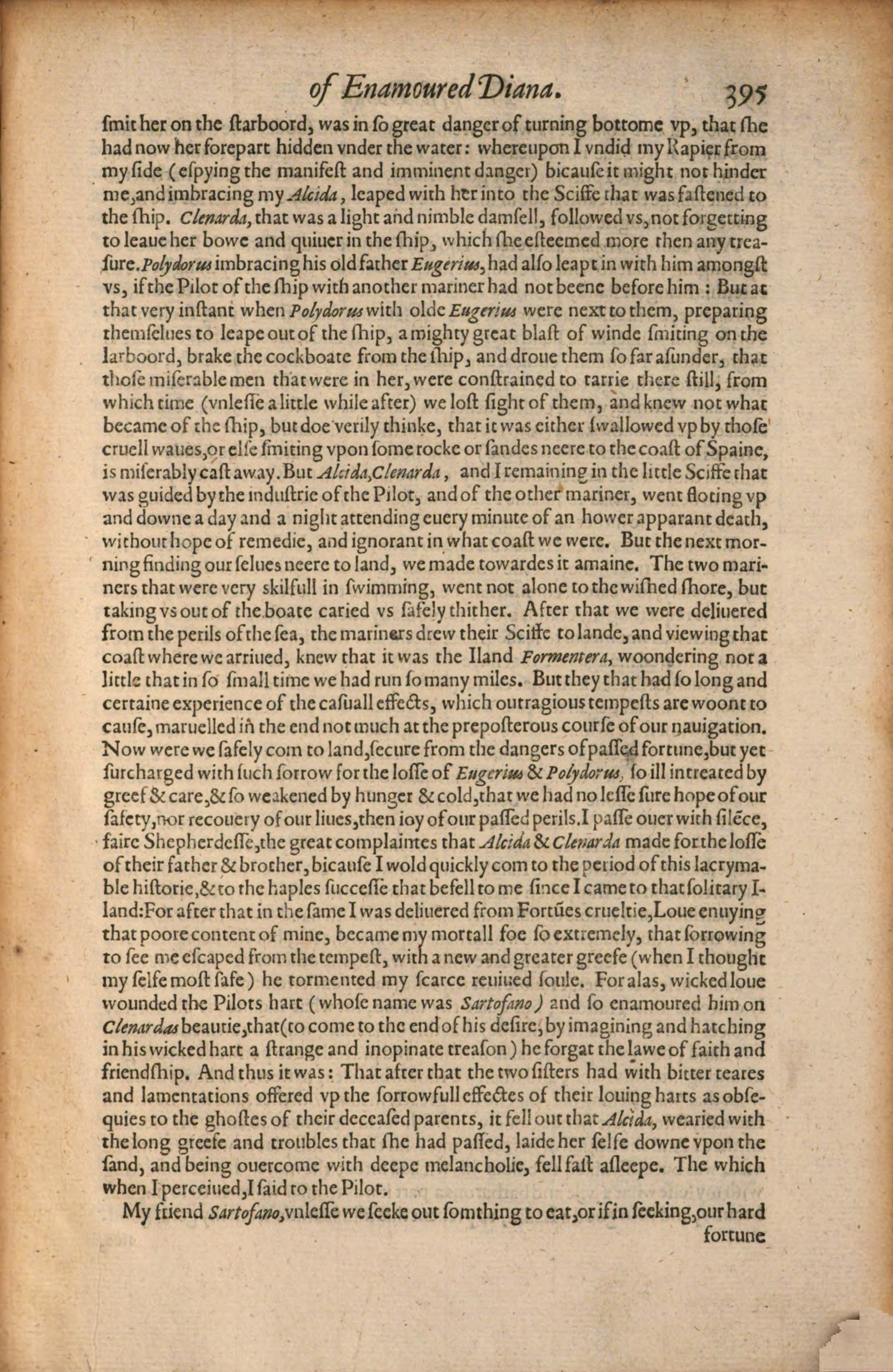 smit her on the starboord, was in so great danger of turning bottome vp, that she had now her forepart hidden vnder the water: whereupon I vndid my Rapier from my side (espying the manifest and imminent danger) bicause it might not hinder me, and imbracing my Alcida, leaped with her into the Sciffe that was fastened to the ship. Clenarda, that was a light and nimble damsell, followed vs, not forgetting to leaue her bowe and quiuer in the ship, which she esteemed more then any treaâˆ£sure. Polydorus imbracing his old father Eugerius, had also leapt in with him amongst vs, if the Pilot of the ship with another mariner had not beene before him: But at that very instant when Polydorus with olde Eugcrius were next to them, preparing themselues to leape out of the ship, a mighty great blast of winde smiting on the larboord, brake the cockboate from the ship, and droue them so far asunder, that those miserable men that were in her, were constrained to tarrie there still, from which time (vnlesse a little while after) we lost sight of them, and knew not what became of the ship, but doe verily thinke, that it was either swallowed vp by those cruell waues, or else smiting vpon some rocke or sandes neere to the coast of Spaine, is miserably cast away. But Alcida, Clenarda, and I remaining in the little Sciffe that was guided by the industrie of the Pilot, and of the other mariner, went floting vp and downe a day and a night attending euery minute of an hower apparant death, without hope of remedie, and ignorant in what coast we were. But the next morâˆ£ning finding our selues neere to land, we made towardes it amaine. The two mariâˆ£ners that were very skilfull in swimming, went not alone to the wished shore, but taking vs out of the boate caried vs safely thither. After that we were deliuered from the perils of the sea, the mariners drew their Sciffe to lande, and viewing that coast where we arriued, knew that it was the Iland Formentera, woondering not a little that in so small time we had run so many miles. But they that had so long and certaine experience of the casuall effects, which outragious tempests are woont to cause, maruelled in the end not much at the preposterous course of our nauigation. Now were we safely com to land, secure from the dangers of passed fortune, but yet surcharged with such sorrow for the losse of Eugerius & Polydorus, so ill intreated by greef & care, & so weakened by hunger & cold, that we had no lesse sure hope of our safety, nor recouery of our liues, then ioy of our passed perils. I passe ouer with sileÌ„ce, faire Shepherdesse, the great complaintes that Alcida & Clenarda made for the losse of their father & brother, bicause I wold quickly com to the period of this lacrymaâˆ£ble historie, & to the haples successe that befell to me since I came to that solitary Iâˆ£land: For after that in the same I was deliuered from FortuÌ„es crueltie, Loue enuying that poore content of mine, became my mortall foe so extremely, that sorrowing to see me escaped from the tempest, with a new and greater greefe (when I thought my selfe most safe) he tormented my scarce reuiued soule. For alas, wicked loue wounded the Pilots hart (whose name was Sartofano) and so enamoured him on Clenardas beautie, that (to come to the end of his desire, by imagining and hatching in his wicked hart a strange and inopinate treason) he forgat the lawe of faith and friendship. And thus it was: That after that the two sisters had with bitter teares and lamentations offered vp the sorrowfull effectes of their louing harts as obseâˆ£quies to the ghostes of their deceased parents, it fell out that Alcida, wearied with the long greefe and troubles that she had passed, laide her selfe downe vpon ã€ˆâ—Šã€‰ sand, and being ouercome with deepe melancholie, fell fast asleepe. The wâ€¢â€¦ when I perceiued, I said to the Pilot.
My friend Sartofano, vnlesse we seeke out somthing to eat, or if in seeking, our hard