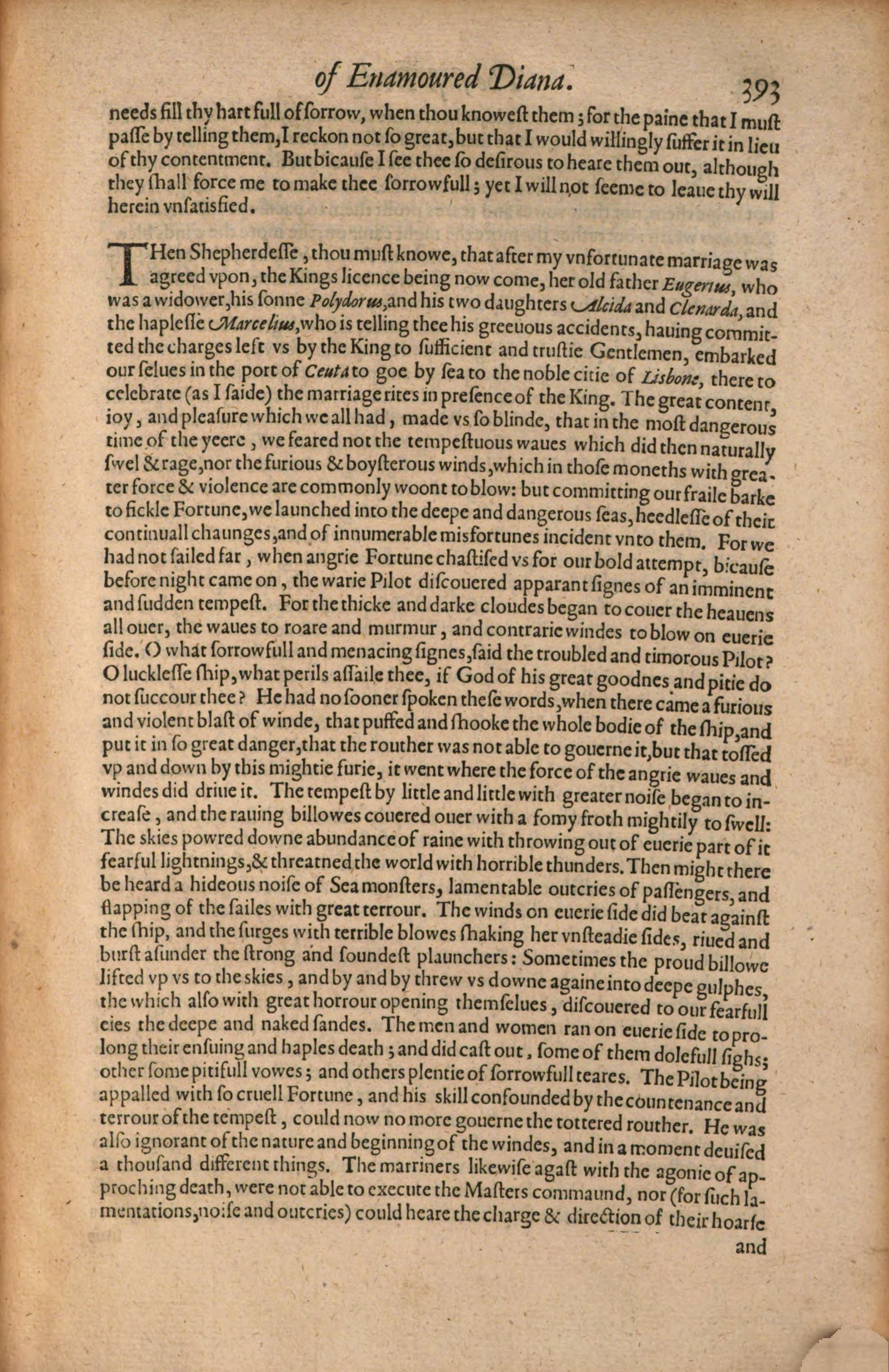 needs fill thy hart full of sorrow, when thou knowest them; for the paine that I must passe by telling them, I reckon not so great, but that I would willingly suffer it in lieu of thy contentment. But bicause I see thee so desirous to heare them out, although they shall force me to make thee sorrowfull; yet I will not seeme to leaue thy will herein vnsatisfied.

THen Shepherdesse, thou must knowe, that after my vnfortunate marriage was agreed vpon, the Kings licence being now come, her old father Eugerius, who was a widower, his sonne Polydorus, and his two daughters Alcida and Clenarda, and the haplesse Marcelius, who is telling thee his greeuous accidents, hauing commitâˆ£ted the charges left vs by the King to sufficient and trustie Gentlemen, embarked our selues in the port of Ceuta to goe by sea to the noble citie of Lisbone, there to celebrate (as I saide) the marriage rites in presence of the King. The great content, ioy, and pleasure which we all had, made vs so blinde, that in the most dangerous time of the yeere, we feared not the tempestuous waues which did then naturally swel & rage, nor the furious & boysterous winds, which in those moneths with greaâˆ£ter force & violence are commonly woont to blow: but committing our fraile barke to fickle Fortune, we launched into the deepe and dangerous seas, heedlesse of their continuall chaunges, and of innumerable misfortunes incident vnto them. For we had not sailed far, when angrie Fortune chastised vs for our bold attempt, bicause before night came on, the warie Pilot discouered apparant signes of an imminent and sudden tempest. For the thicke and darke cloudes began to couer the heauens all ouer, the waues to roare and murmur, and contrarie windes to blow on euerie side. O what sorrowfull and menacing signes, said the troubled and timorous Pilot? O lucklesse ship, what perils assaile thee, if God of his great goodnes and pitie do not succour thee? He had no sooner spoken these words, when there came a furious and violent blast of winde, that puffed and shooke the whole bodie of the ship, and put it in so great danger, that the routher was not able to gouerne it, but that tossed vp and down by this mightie furie, it went where the force of the angrie waues and windes did driue it. The tempest by little and little with greater noise began to inâˆ£crease, and the rauing billowes couered ouer with a fomy forth mightily to swell: The skies powred downe abundance of raine with throwing out of euerie part of it fearful lightnings, & threatned the world with horrible thunders. Then might there be heard a hideous noise of Sea monsters, lamentable outcries of passengers, and flapping of the sailes with great terrour. The winds on euerie side did beat against the ship, and the surges with terrible blowes shaking her vnsteadie sides, riued and burst asunder the strong and soundest plaunchers: Sometimes the proud billowe lifted vp vs to the skies, and by and by threw vs downe againe into deepe gulphes, the which also with great horrour opening themselues, discouered to our fearfull eies the deepe and naked sandes. The men and women ran on euerie side to proâˆ£long their ensuing and haples death; and did cast out, some of them dolefull sighs; other some pitifull vowes; and others plentie of sorrowfull teares. The Pilot being appalled with so cruell Fortune, and his skill confounded by the countenance and terrour of the tempest, could now no more gouerne the tottered routher. He was also ignorant of the nature and beginning of the windes, and in a moment deuised a thousand different things. The marriners likewise agast with the agonie of apâˆ£proching death, were not able to execute the Masters commaund, nor (for such laâˆ£mentations, noise and outcries) could heare the charge & direction of their hoarse