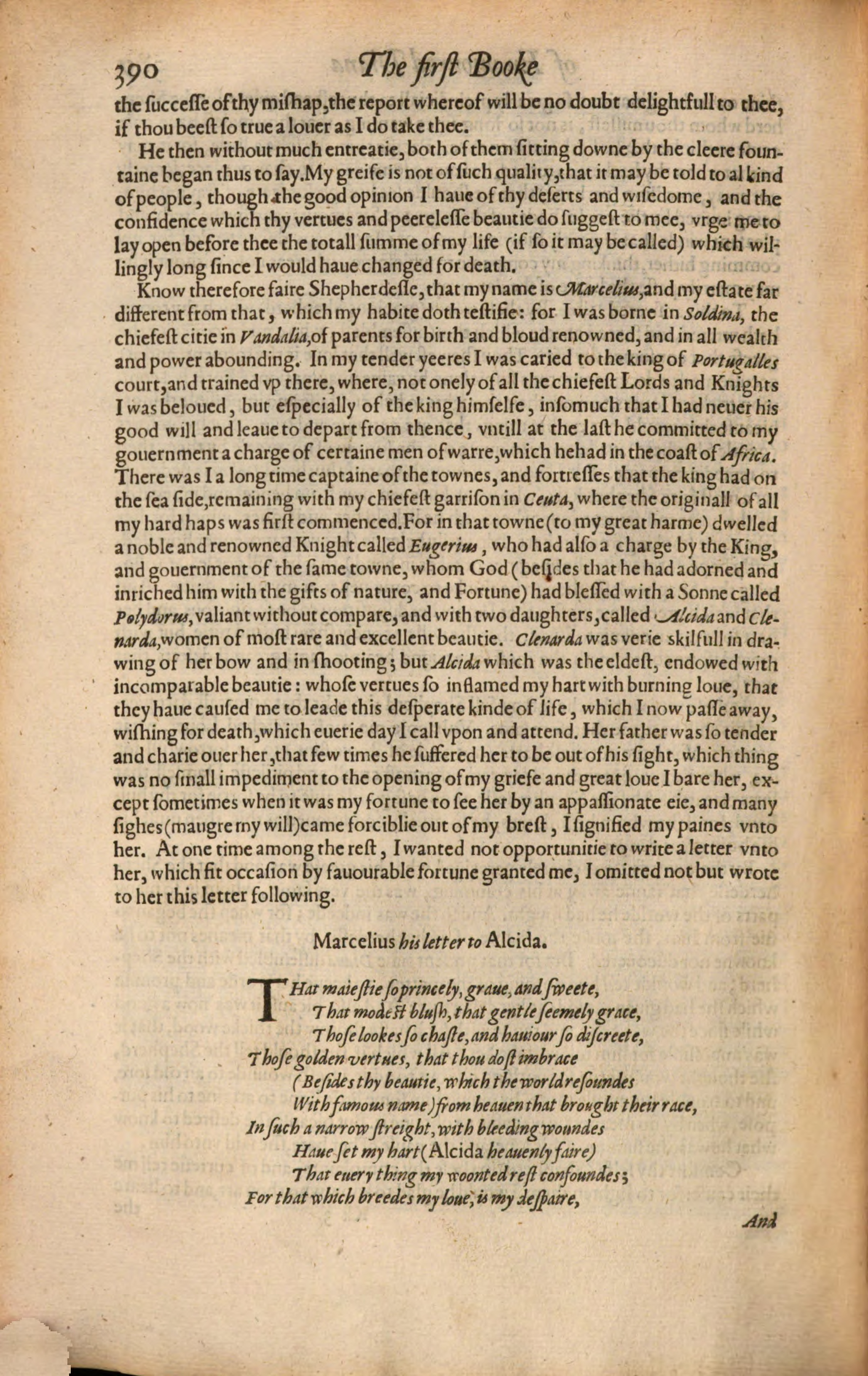 the successe of thy mishap, the report whereof will be no doubt delightfull to thee, if thou beest so true a louer as I do take thee.
He then without much entreatie, both of them sitting downe by the cleere founâˆ£taine began thus to say. My greife is not of such quality, that it may be told to al kind of people, though the good opinion I haue of thy deserts and wisedome, and the confidence which thy vertues and peerelesse beautie do suggest to mee, vrge me to lay open before thee the totall summe of my life (if so it may be called) which wilâˆ£lingly long since I would haue changed for death.
Know therefore faire Shepherdesse, that my name is Marcelius, and my estate far different from that, which my habite doth testifie: for I was borne in Soldina, the chiefest citie in Vandalia, of parents for birth and bloud renowned, and in all wealth and power abounding. In my tender yeeres I was caried to the king of Portugalles court, and trained vp there, where, not onely of all the chiefest Lords and Knights I was beloued, but especially of the king himselfe; insomuch that I had neuer his good will and leaue to depart from thence, vntill at the last he committed to my gouernment a charge of certaine men of warre, which he had in the coast of Africa. There was I a long time captaine of the townes, and fortresses that the king had on the sea side, remaining with my chiefest garrison in Ceuta, where the originall of all my hard haps was first commenced. For in that towne (to my great harme) dwelled a noble and renowned Knight called Eugerius, who had also a charge by the King, and gouernment of the same towne, whom God (besides that he had adorned and inriched him with the gifts of nature, and Fortune) had blessed with a Sonne called Polydorus, valiant without compare, and with two daughters, called Alcida and Cleâˆ£narda, women of most rare and excellent beautie. Clenarda was verie skilfull in draâˆ£wing of her bow and in shooting; but Alcida which was the eldest, endowed with incomparable beautie: whose vertues so inflamed my hart with burning loue, that they haue caused me to leade this desperate kinde of life, which I now passe away, wishing for death, which euerie day I call vpon and attend. Her father was so tender and charie ouer her, that few times he suffered her to be out of his sight, which thing was no small impediment to the opening of my griefe and great loue I bare her, exâˆ£cept sometimes when it was my fortune to see her by an appassionate eie, and many sighes (maugre my will) came forciblie out of my brest, I signified my paines vnto her. At one time among the rest, I wanted not opportunitie to write a letter vnto her, which fit occasion by fauourable fortune granted me, I omitted not but wrote to her this letter following.

THat maiestie so princely, graue, and sweete,
That modest blush, that gentle seemely grace,
Those lookes so chaste, and hauiour so discreete,
Those golden vertues, that thou dost imbrace
(Besides thy beautie, which the world resoundes
With famous name) from heauen that brought their race,
In such a narrow streight, with bleeding woundes
Haue set my hart (Alcida heauenly faire)
That euery thing my woonted rest confoundes;
For that which breedes my loue, is my despaire,