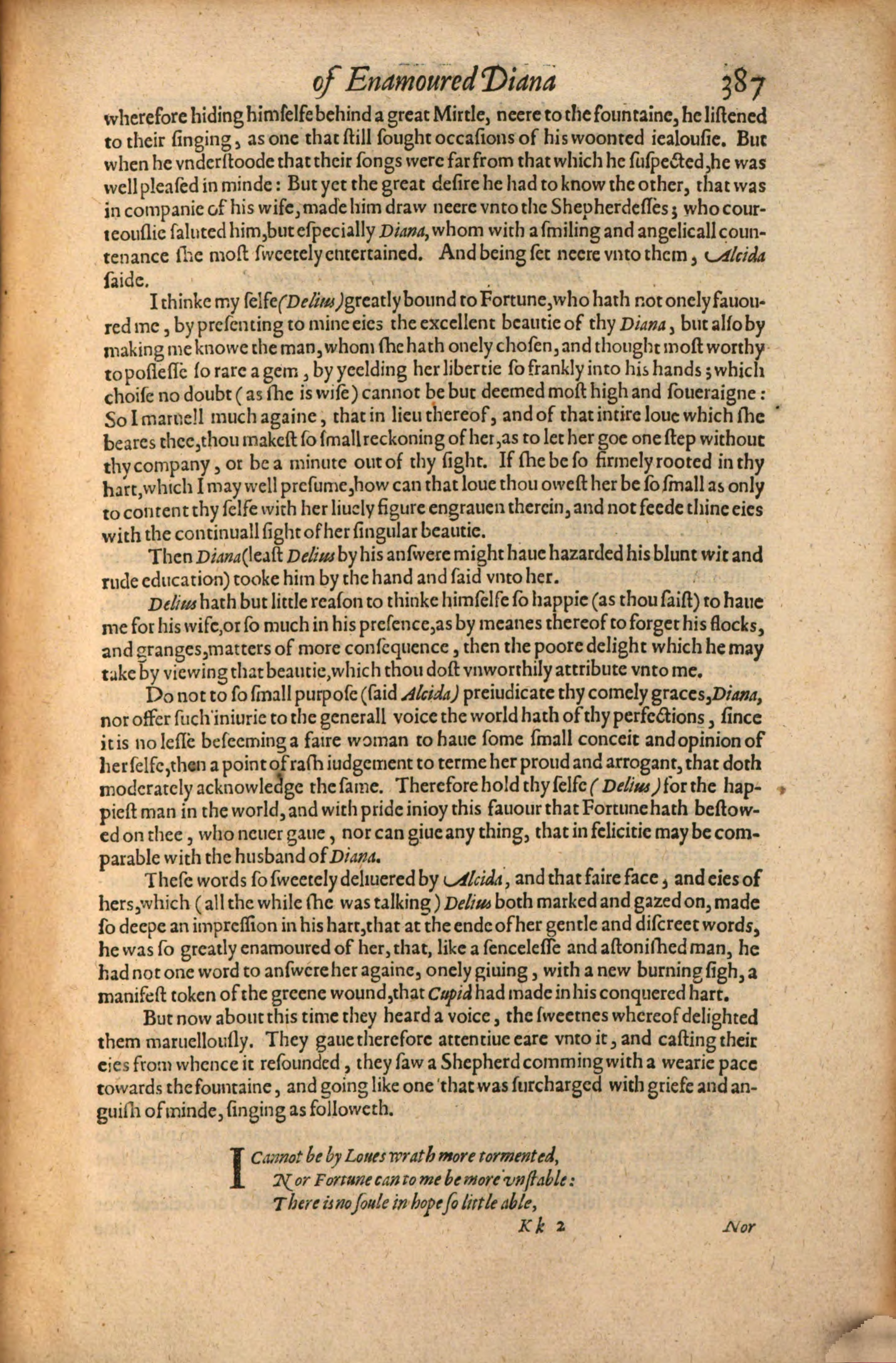 wherefore hiding himselfe behind a great Mittle, neere to the fountaine, he listened to their singing, as one that still sought occasious of his woonted iealousie. But when he vnderstoode that their songs were far from that which he suspected, he was well pleased in minde: But yet the great desire he had to know the other, that was in companie of his wife, made him draw neere vnto the Shepherdesses; who courâˆ£teouslie saluted him, but especially Diana, whom with a smiling and angelicall counâˆ£tenance she most sweetely entertained. And being set neere vnto them, Alcida saide.
I thinke my selfe (Delius) greatly bound to Fortune, who hath not onely fauouâˆ£red me, by presenting to mine eies the excellent beautie of thy Diana, but also by making me knowe the man, whom she hath onely chosen, and thought most worthy to possesse so rare a gem, by yeelding her libertie so frankly into his hands; which choise no doubt (as she is wise) cannot be but deemed most high and soueraigne: So I maruell much againe, that in lieu thereof, and of that intire loue which she beares thee, thou makest so small reckoning of her, as to let her goe one step without thy company, or be a minute out of thy sight. If she be so firmely rooted in thy hart, which I may well presume, how can that loue thou owest her be so small as only to content thy selfe with her liuely figure engrauen therein, and not feede thine eies with the continuall sight of her singular beautie.
Then Diana (least Delius by his answere might haue hazarded his blunt wit and rude education) tooke him by the hand and said vnto her.
Delius hath but little reason to thinke himselfe so happie (as thou saist) to haue me for his wife, or so much in his presence, as by meanes thereof to forget his flocks, and granges, matters of more consequence, then the poore delight which he may take by viewing that beautie, which thou dost vnworthily attribute vnto me.
Do not to so small purpose (said Alcida) preiudicate thy comely graces, Diana, nor offer such iniurie to the generall voice the world hath of thy perfections, since it is no lesse beseeming a faire woman to haue some small conceit and opinion of herselfe, then a point of rash iudgement to terme her proud and arrogant, that doth moderately acknowledge the same. Therefore hold thy selfe (Delius) for the hapâˆ£piest man in the world, and with pride inioy this fauour that Fortune hath bestowâˆ£ed on thee, who neuer gaue, nor can giue any thing, that in felicitie may be comâˆ£parable with the husband of Diana.
These words so sweetely deliuered by Alcida, and that faire face, and eies of hers, which (all the while she was talking) Delius both marked and gazed on, made so deepe an impression in his hart, that at the ende of her gentle and discreet words, he was so greatly enamoured of her, that, like a sencelesse and astonished man, he had not one word to answere her againe, onely giuing, with a new burning sigh, a manifest token of the greene wound, that Cupid had made in his conquered hart.
But now about this time they heard a voice, the sweetnes whereof delighted them maruellously. They gaue therefore attentiue eare vnto it, and casting their eies from whence it resounded, they saw a Shepherd comming with a wearie pace towards the fountaine, and going like one that was surcharged with griefe and anâˆ£guish of minde, singing as followeth.

I Cannot be by Loues wrath more tormented,
Nor Fortune can to me be more vnstable:
There is no soule in hope so little able,