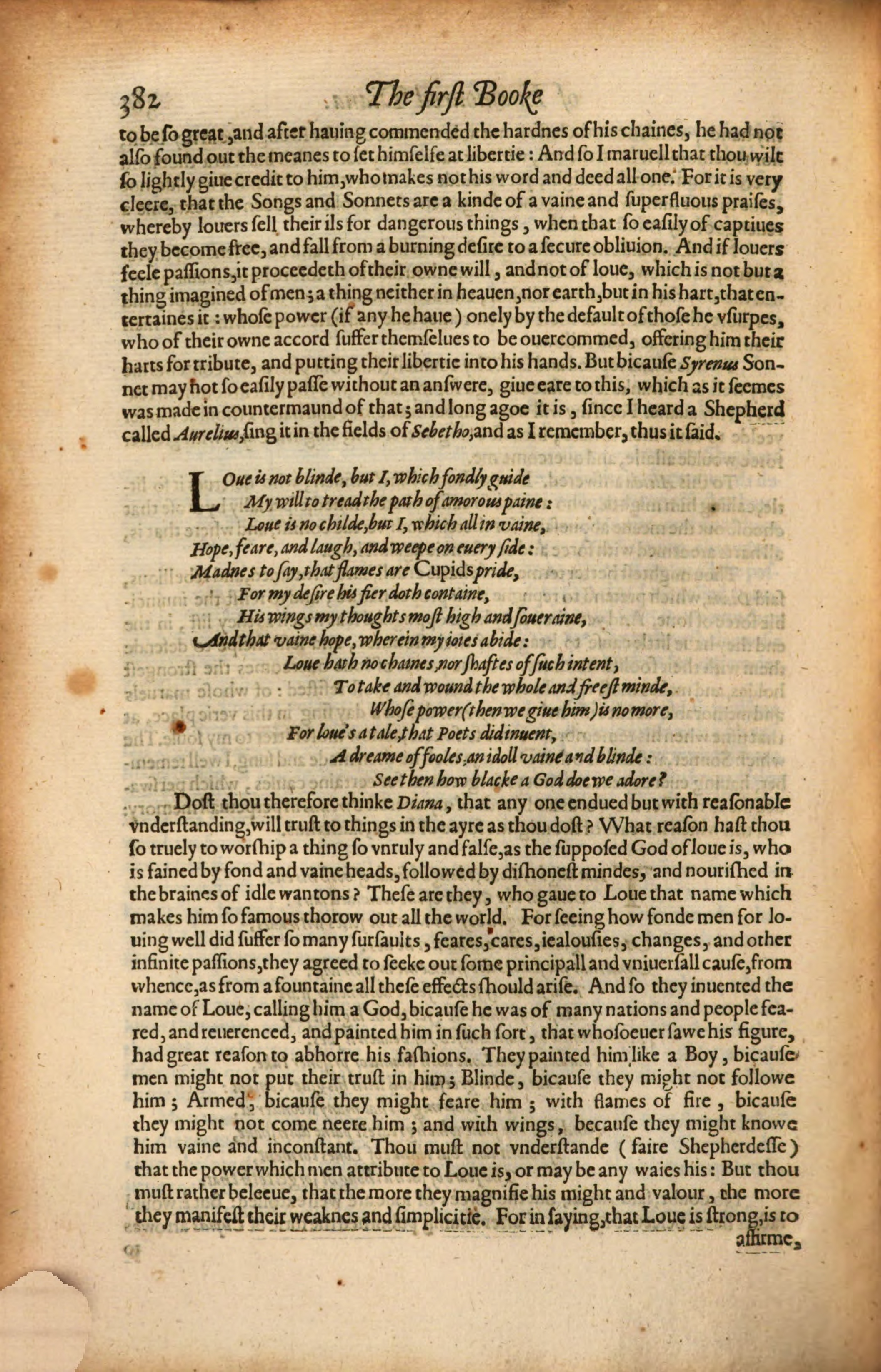 to be so great, and after hauing commended the hardnes of his chaines, he had not also found out the meanes to set himselfe at libertie: And so I maruell that thou wilt so lightly giue credit to him, who makes not his word and deed all one. For it is very cleere, that the Songs and Sonnets are a kinde of a vaine and superfluous praises, whereby louers sell their ils for dangerous things, when that so easily of captiues they become free, and fall from a burning desire to a secure obliuion. And if louers feele passions, it proceedeth of their owne will, and not of loue, which is not but a thing imagined of men; a thing neither in heauen, nor earth, but in his hart, that enâˆ£tertaines it: whose power (if any he haue) onely by the default of those he vsurpes, who of their owne accord suffer themselues to be ouercommed, offering him their harts for tribute, and putting their libertie into his hands. But bicause Syrenus Sonâˆ£net may not so easily passe without an answere, giue eare to this, which as it seemes was made in countermaund of that; and long agoe it is, since I heard a Shepherd called Aurelius, sing it in the fields of Sebetho, and as I remember, thus it said.

LOue is not blinde, but I, which fondly guide
My will to tread the path of amorous paine:
Loue is no childe, but I, which all in vaine,
Hope, feare, and laugh, and weepe on euery side:
Madnes to say, that flames are Cupids pride,
For my desire his fier doth containe,
His wings my thoughts most high and soueraine,
And that vaine hope, wherein my ioies abide:
Loue hath no chaines nor shaftes of such intent,
To take and wound the whole and freest minde,
Whose power (then we giue him) is no more,
For loue’s a tale, that Poets didinuent,
A dreame of fooles, an idoll vaine and blinde:
See then how blacke a God doe we adore?

Dost thou therefore thinke Diana, that any one endued but with reasonable vnderstanding, will trust to things in the ayre as thou dost? What reason hast thou so truely to worship a thing so vnruly and false, as the supposed God of loue is, who is fained by fond and vaine heads, followed by dishonest mindes, and nourished in the braines of idle wantons? These are they, who gaue to Loue that name which makes him so famous thorow out all the world. For seeing how fonde men for loâˆ£uing well did suffer so many sursaults, feares, cares, iealousies, changes, and other infinite passions, they agreed to seeke out some principall and vniuersall cause, from whence, as from a fountaine all these effects should arise. And so they inuented the name of Loue, calling him a God, bicause he was of many nations and people feaâˆ£red, and reuerenced, and painted him in such sort, that whosoeuer sawe his figure, had great reason to abhorre his fashions. They painted him like a Boy, bicause men might not put their trust in him; Blinde, bicause they might not followe him; Armed, bicause they might feare him; with flames of fire, bicause they might not come neere him; and with wings, because they might knowe him vaine and inconstant. Thou must not vnderstande (faire Shepherdesse) that the power which men attribute to Loue is, or may be any waies his: But thou must rather beleeue, that the more they magnifie his might and valour, the more they manifest their weaknes and simplicitie. For in saying, that Loue is strong, is to