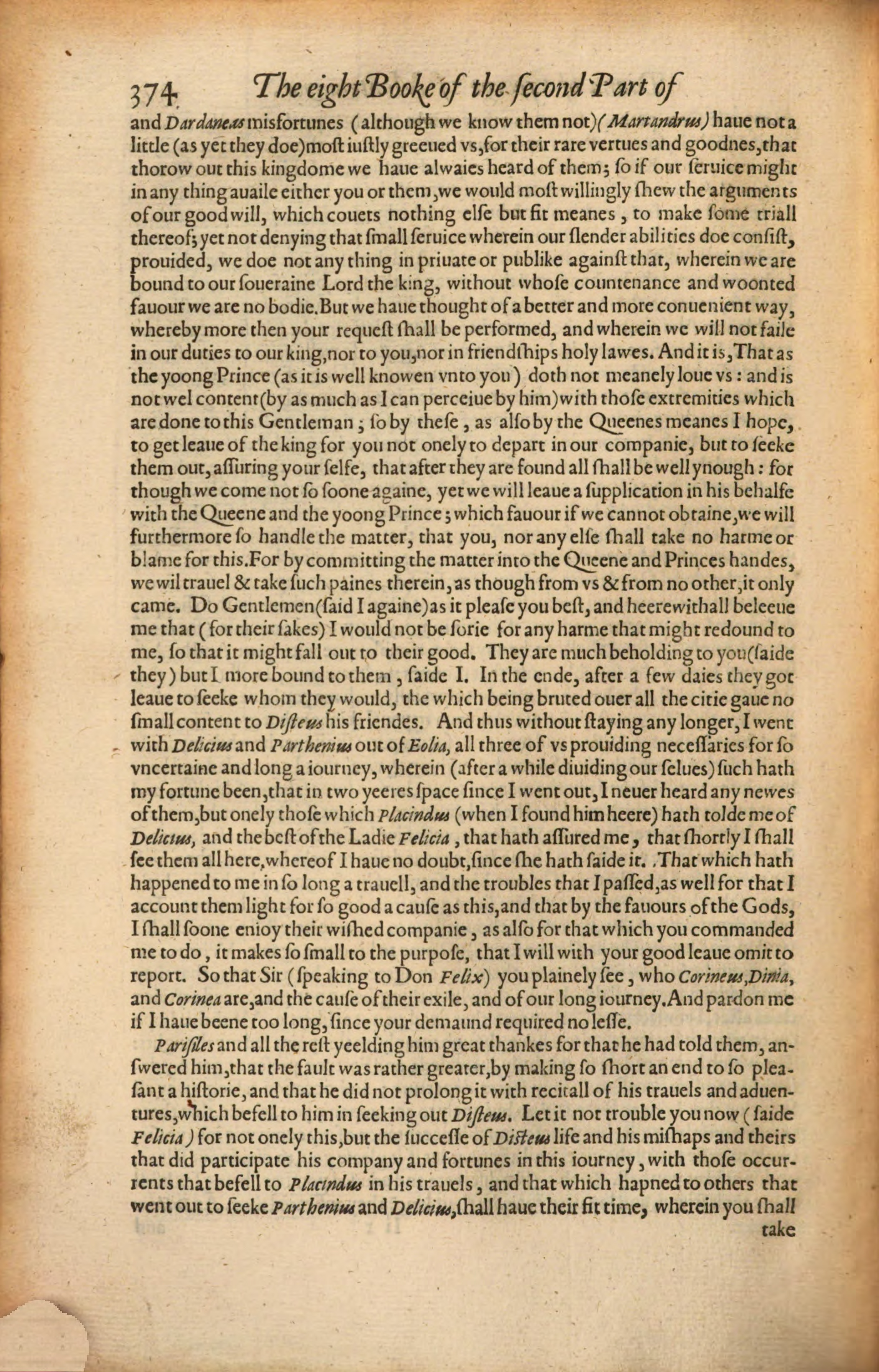 and Dardaneas misfortunes (although we know them not) (Martandrus) haue not a little (as yet they doe) most iustly greeued vs, for their rare vertues and goodnes, that thorow out this kingdome we haue alwaies heard of them; so if our seruice might in any thing auaile either you or them, we would most willingly shew the arguments of our good will, which couets nothing else but fit meanes, to make some triall thereof; yet not denying that small seruice wherein our slender abilities doe consist, prouided, we doe not any thing in priuate or publike against that, wherein we are bound to our soueraine Lord the king, without whose countenance and woonted fauour we are no bodie. But we haue thought of a better and more conuenient way, whereby more then your request shall be performed, and wherein we will not faile in our duties to our king, nor to you, nor in friendships holy lawes. And it is, That as the yoong Prince (as it is well knowen vnto you) doth not meanely loue vs: and is not wel content (by as much as I can perceiue by him) with those extremities which are done to this Gentleman; so by these, as also by the Queenes meanes I hope, to get leaue of the king for you not onely to depart in our companie, but to seeke them out, assuring your selfe, that after they are found all shall be well ynough: for though we come not so soone againe, yet we will leaue a supplication in his behalfe with the Queene and the yoong Prince; which fauour if we cannot obtaine, we will furthermore so handle the matter, that you, nor any else shall take no harme or blame for this. For by committing the matter into the Queene and Princes handes, we wil trauel & take such paines therein, as though from vs & from no other, it only came. Do Gentlemen (said I againe) as it please you best, and heorewithall beleeue me that (for their sakes) I would not be sorie for any harme that might redound to me, so that it might fall out to their good. They are much beholding to you (saide they) but I more bound to them, saide I. In the ende; after a few daies they got leaue to seeke whom they would, the which being bruted ouer all the citie gaue no small content to Disteus his friendes. And thus without staying any longer, I went with Delicius and Parthenius out of Eolia, all three of vs prouiding necessaries for so vncertaine and long a iourney, wherein (after a while diuiding our selues) such hath my fortune been, that in two yeeres space since I went out, I neuer heard any newes of them, but onely those which Placindus (when I found him heere) hath tolde me of Delictus, and the best of the Ladie Felicia, that hath assured me, that shortly I shall see them all here, whereof I haue no doubt, since she hath saide it. That which hath happened to me in so long a trauell, and the troubles that I passed, as well for that I account them light for so good a cause as this, and that by the fauours of the Gods, I shall soone enioy their wished companie, as also for that which you commanded me to do, it makes so small to the purpose, that I will with your good leaue omit to report. So that Sir (speaking to Don Felix) you plainely see, who Corineus, Dinia, and Corinea are, and the cause of their exile, and of our long iourney. And pardon me if I haue beene too long, since your demaund required no lesse.
Parisiles and all the rest yeelding him great thankes for that he had told them, anâˆ£swered him, that the fault was rather greater, by making so short an end to so pleaâˆ£sant a historie, and that he did not prolong it with recitall of his trauels and aduenâˆ£tures, which befell to him in seeking out Disteus. Let it not trouble you now (saide Felicia) for not onely this, but the successe of Disteus life and his mishaps and theirs that did participate his company and fortunes in this iourney, with those occurâˆ£rents that befell to Plactndus in his trauels, and that which hapned to others that went out to seeke Parthenius and Delicius, shall haue their fit time, wherein you shall