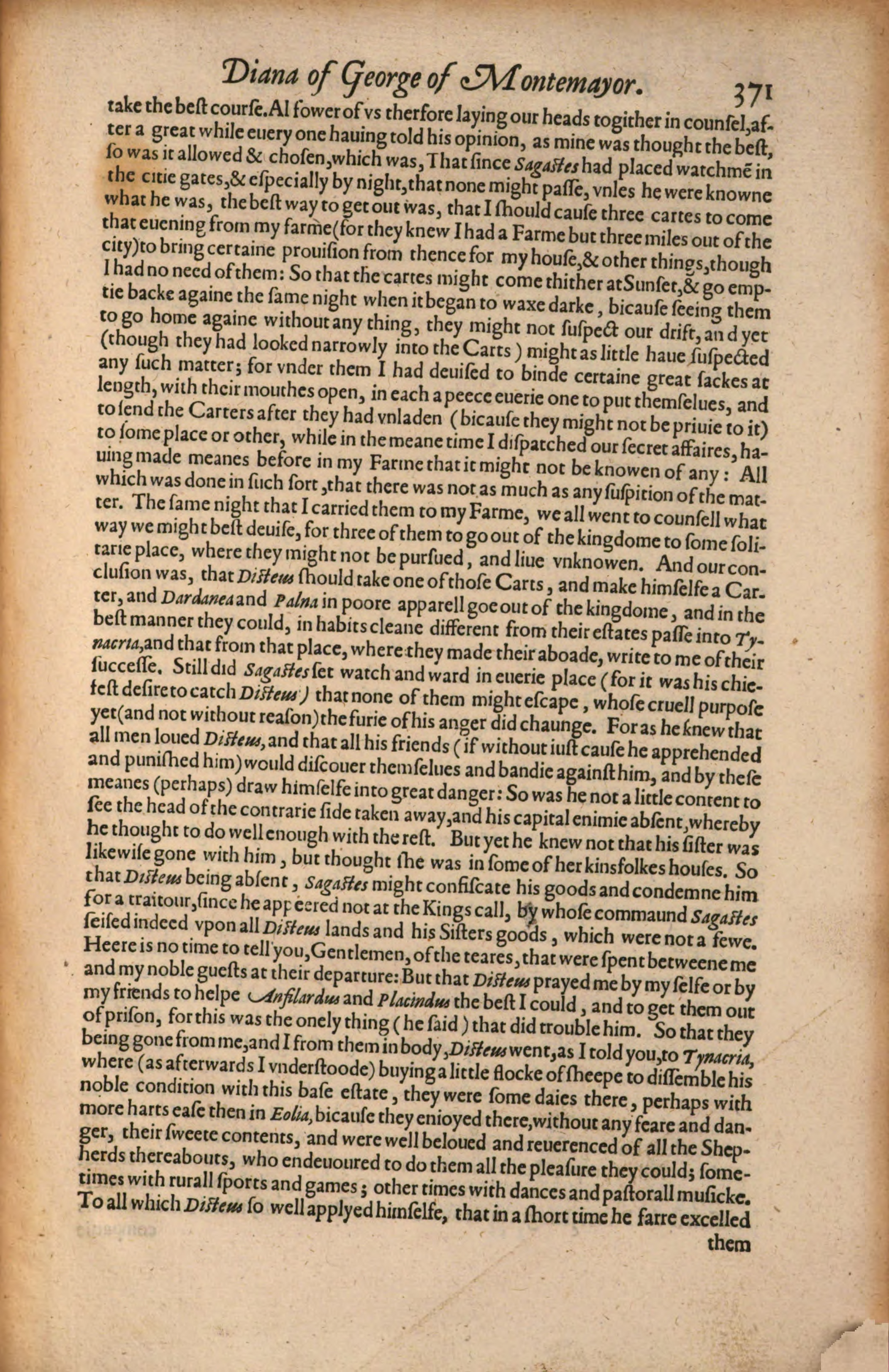 take the best course. Al fower of vs therfore laying our heads togither in counsel, afâˆ£ter a great while euery one hauing told his opinion, as mine was thought the best, so was it allowed & chosen, which was, That since Sagastes had placed watchmeÌ„ in the citie gates, & especially by night, that none might passe, vnles he were knowne what he was, the best way to get out was, that I should cause three cartes to come that euening from my farme (for they knew I had a Farme but three miles out of the city) to bring certaine prouision from thence for my house, & other things, though I had no need of them: So that the cartes might come thither at Sunset, & go empâˆ£tie backe againe the same night when it began to waxe darke, bicause seeing them to go home againe without any thing, they might not suspect our drift, and yet (though they had looked narrowly into the Carts) might as little haue suspected any such matter; for vnder them I had deuised to binde certaine great sackes at length, with their mouthes open, in each a peece euerie one to put themselues, and to send the Carters after they had vnladen (bicause they might not be priuie to it) to some place or other, while in the meane time I dispatched our secret affaires, haâˆ£uing made meanes before in my Farme that it might not be knowen of any: All which was done in such sort, that there was not as much as any suspition of the matâˆ£ter. The same night that I carried them to my Farme, we all went to counsell what way we might best deuise for three of them to go out of the kingdome to some soliâˆ£tarie place, where they might not be pursued, and liue vnknowen. And our conâˆ£clusion was, that Disteus should take one of those Carts, and make himselfe a Carâˆ£ter, and Dardanea and Palna in poore apparell goe out of the kingdome, and in the best manner they could, in habits cleane different from their estates passe into Tyâˆ£nacrta, and that from that place, where they made their aboade, write to me of their successe. Still did Sagastes set watch and ward in euerie place (for it was his chieâˆ£fest desire to catch Disteus) that none of them might escape, whose eruell purpose yet (and not without reason) the furie of his anger did chaunge. For as he knew that all men loued Disteus, and that all his friends (if without iust cause he apprehended and punished him) would discouer themselues and bandie against him, and by these meanes (perhaps) draw himselfe into great danger: So was he not a little content to see the head of the contrarie side taken away, and his capital enimie absent, whereby he thought to do well enough with the rest. But yet he knew not that his sister was likewise gone with him, but thought she was in some of her kinsfolkes houses. So that Disteus being absent, Sagastes might confiscate his goods and condemne him for a traitour, since he appeered not at the Kings call, by whose commaund Sagastes seised indeed vpon all Disteus lands and his Sisters goods, which were not a fewe. Heere is no time to tell you, Gentlemen, of the teares, that were spent betweene me and my noble guests at their departure: But that Disteus prayed me by my selfe or by my friends to helpe Anfilardus and Placindus the best I could, and to get them out of prison, for this was the onely thing (he said) that did trouble him. So that they being gone from me, and I from them in body, Disteus went, as I told you, to Tynacria, where (as afterwards I vnderstoode) buying a little flocke of sheepe to dissemble his noble condition with this base estate, they were some daies there, perhaps with more harts ease then in Eolia, bicause they enioyed there, without any feare and danâˆ£ger, their sweete contents, and were well beloued and reuerenced of all the Shepâˆ£herds thereabouts, who endeuoured to do them all the pleasure they could; someâˆ£times with rurall sports and games; other times with dances and pastorall musicke. To all which Disteus so well applyed himselfe, that in a short time he farre excelled