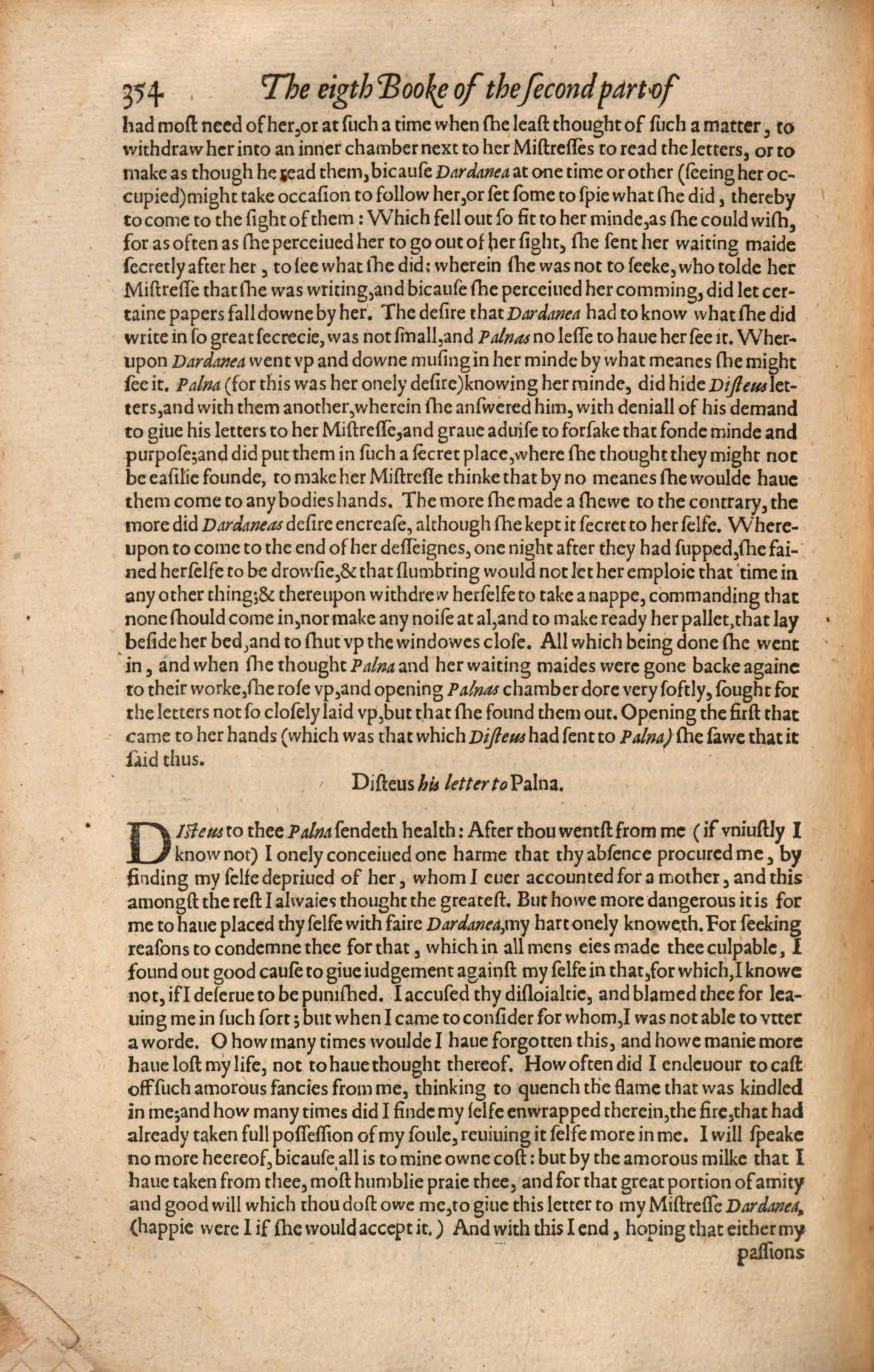 had most need of her, or at such a time when she least thought of such a matter, to withdraw her into an inner chamber next to her Mistresses to read the letters, or to make as though he read them, bicause Dardanea at one time or other (seeing her ocâˆ£cupied) might take occasion to follow her, or set some to spie what she did, thereby to come to the sight of them: Which fell out so fit to her minde, as she could wish, for as often as she perceiued her to go out of her sight, she sent her waiting maide secretly after her, to see what she did: wherein she was not to seeke, who tolde her Mistresse that she was writing, and bicause she perceiued her comming, did let cerâˆ£taine papers fall downe by her. The desire that Dardanea had to know what she did write in so great secrecie, was not small, and Palnas no lesse to haue her see it. Wherâˆ£upon Dardanea went vp and downe musing in her minde by what meanes she might see it. Palna (for this was her onely desire) knowing her minde, did hide Disteus letâˆ£ters, and with them another, wherein she answered him, with deniall of his demand to giue his letters to her Mistresse, and graue aduise to forsake that fonde minde and purpose; and did put them in such a secret place, where she thought they might not be easilie founde, to make her Mistresle thinke that by no meanes she woulde haue them come to any bodies hands. The more she made a shewe to the contrary, the more did Dardaneas desire increase, although she kept it secret to her selfe. Whereâˆ£upon to come to the end of her desseignes, one night after they had supped, she faiâˆ£ned herselfe to be drowsie, & that slumbring would not let her emploie that time in any other thing; & thereupon withdrew herselfe to take a nappe, commanding that none should come in, nor make any noise at al, and to make ready her pallet, that lay beside her bed, and to shut vp the windowes close. All which being done she went in, and when she thought Palna and her waiting maides were gone backe againe to their worke, she rose vp, and opening Palnas chamber dore very softly, sought for the letters not so closely laid vp, but that she found them out. Opening the first that came to her hands (which was that which Disteus had sent to Palna) she sawe that it said thus.

DIsteus to thee Palna sendeth health: After thou wentst from me (if vniustly I know not) I onely conceiued one harme that thy absence procured me, by finding my selfe depriued of her, whom I euer accounted for a mother, and this amongst the rest I alwaies thought the greatest. But howe more dangerous it is for me to haue placed thy selfe with faire Dardanea, my hart onely knoweth. For seeking reasons to condemne thee for that, which in all mens eies made thee culpable, I found out good cause to giue iudgement against my selfe in that, for which, I knowe not, if I deserue to be punished. I accused thy disloialtie, and blamed thee for leaâˆ£uing me in such sort; but when I came to consider for whom, I was not able to vtter a worde. O how many times woulde I haue forgotten this, and howe manie more haue lost my life, not to haue thought thereof. How often did I endeuour to cast off such amorous fancies from me, thinking to quench the flame that was kindled in me; and how many times did I finde my selfe enwrapped therein, the fire, that had already taken full possession of my soule, reuiuing it selfe more in me. I will speake no more heereof, bicause all is to mine owne cost: but by the amorous milke that I haue taken from thee, most humblie praie thee, and for that great portion of amity and good will which thou dost owe me, to giue this letter to my Mistresse Dardanea, (happie were I if she would accept it.) And with this I end, hoping that either my