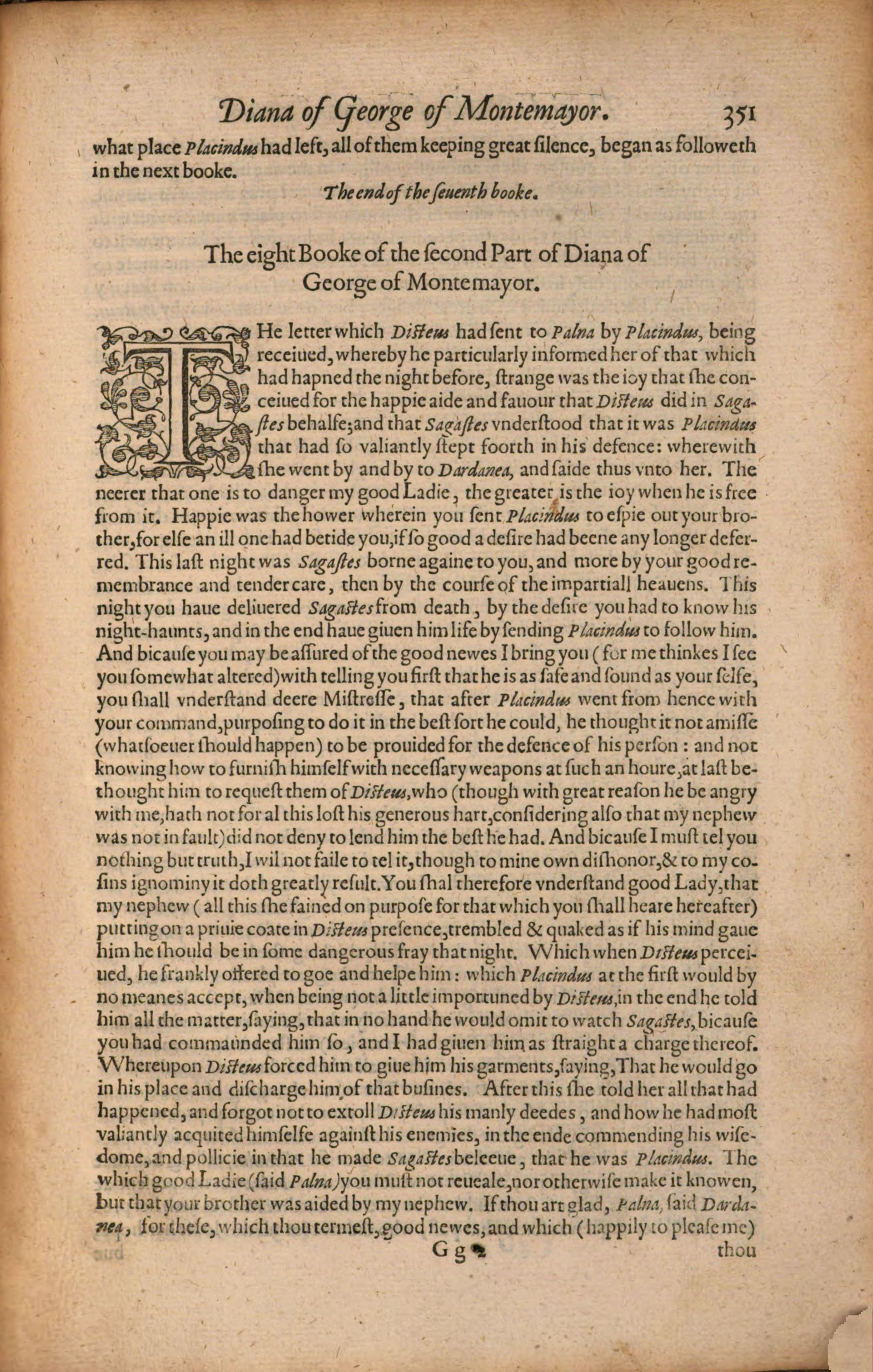 what place Placindus had left, all of them keeping great silence, began as followeth in the next booke.

The end of the seuenth booke.

The eight Booke of the second Part of Diana of George of Montemayor.

The letter which Disteus had sent to Palna by Placindus, being receiued, whereby he particularly informed her of that which had hapned the night before, strange was the ioy that she con|ceiued for the happie aide and fauour that Disteus did in Saga|stes behalfe; and that Sagastes vnderstood that it was Placindus that had so valiantly stept foorth in his defence: wherewith she went by and by to Dardanea, and saide thus vnto her. The neerer that one is to danger my good Ladie, the greater is the ioy when he is free from it. Happie was the hower wherein you sent Placindus to espie out your bro|ther, for else an ill one had betide you, if so good a desire had beene any longer defer|red. This last night was Sagastes borne againe to you, and more by your good re|membrance and tender care, then by the course of the impartiall heauens. This night you haue deliuered Sagastes from death, by the desire you had to know his night-haunts, and in the end haue giuen him life by sending Placindus to follow him. And bicause you may be assured of the good newes I bring you (for me thinkes I see you somewhat altered) with telling you first that he is as safe and sound as your selfe, you shall vnderstand deere Mistresse, that after Placindus went from hence with your command, purposing to do it in the best sort he could, he thought it not amisse (whatsoeuer should happen) to be prouided for the defence of his person: and not knowing how to furnish himself with necessary weapons at such an houre, at last be|thought him to request them of Disteus, who (though with great reason he be angry with me, hath not for al this lost his generous hart, considering also that my nephew was not in fault) did not deny to lend him the best he had. And bicause I must tel you nothing but truth, I wil not faile to tel it, though to mine own dishonor, & to my co|sins ignominy it doth greatly result. You shal therefore vnderstand good Lady, that my nephew (all this she sained on purpose for that which you shall heare hereafter) putting on a priuie coate in Disteus presence, trembled & quaked as if his mind gaue him he should be in some dangerous fray that night. Which when Disteus percei|ued, he frankly offered to goe and helpe him: which Placindus at the first would by no meanes accept, when being not a little importuned by Disteus, in the end he told him all the matter, saying, that in no hand he would omit to watch Sagastes, bicause you had commaunded him so, and I had giuen him as straight a charge thereof. Whereupon Disteus forced him to giue him his garments, saying, That he would go in his place and discharge him of that busines. After this she told her all that had happened, and forgot not to extoll Disteus his manly deedes, and how he had most valiantly acquited himselfe against his enemies, in the ende commending his wise|dome, and pollicie in the he made Sagastes beleeue, that he was Placindus. The which good Ladie (said Palna) you must not reueale, nor otherwise make it knowen, but that your brother was aided by my nephew. If thou are glad, Palna, said Darda|nea, for these, which thou termest, good newes, and which (happily to please me)