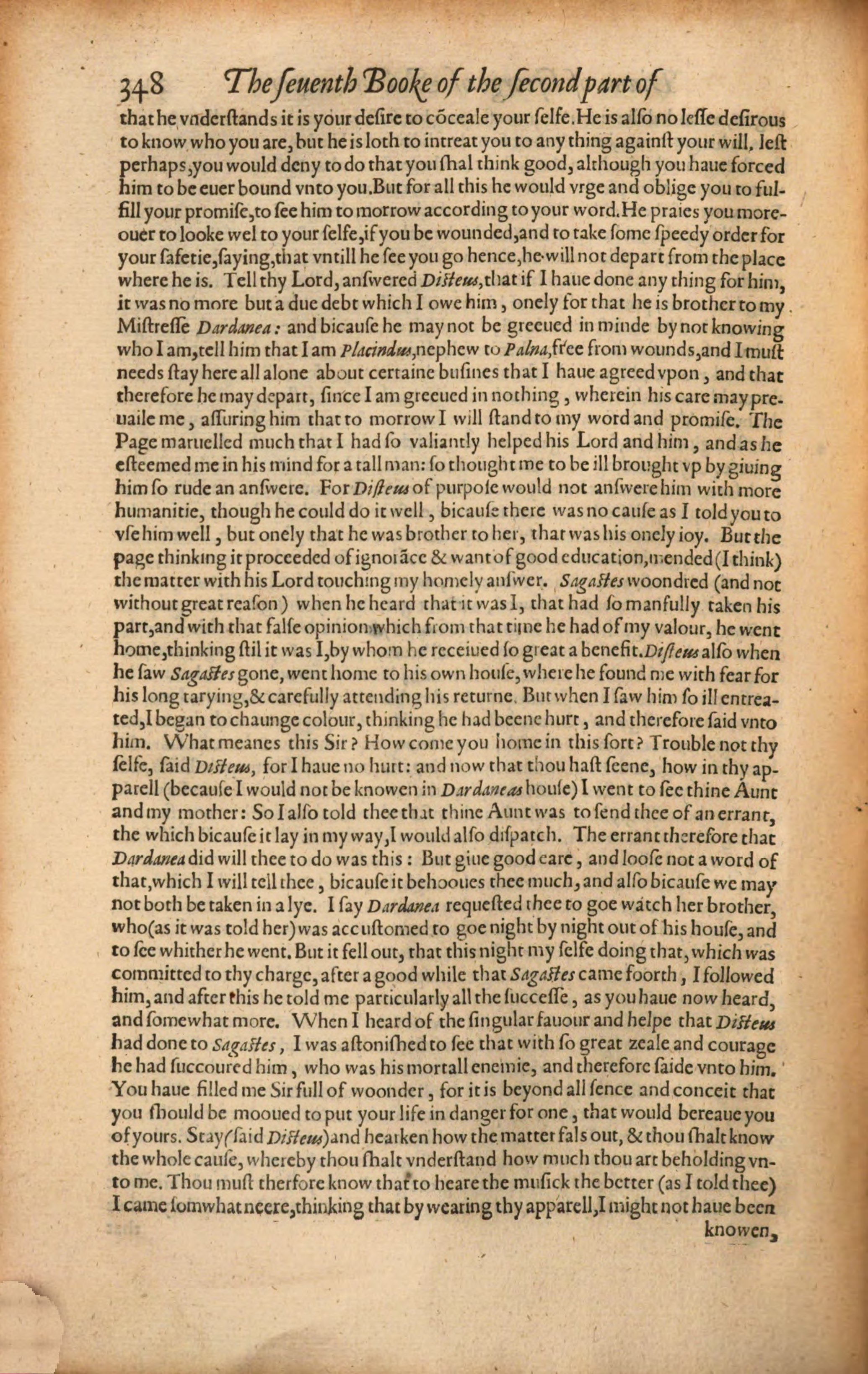 that the vnderstands it is your desire to coÌ„ceale your selfe. He is also no lesse desirous to know who you are, but he is loth to intreat you to any thing against your will, lest perhaps, you would deny to do that you shal think good, although you haue forced him to be euer bound vnto you. But for all this he would vrge and oblige you to fulâˆ£fill your promise, to see him to morrow according to your word. He praies you moreâˆ£ouer to looke wel to your selfe, if you be wounded, and to take some speedy order for your safetie, saying, that vntill he see you go hence, he will not depart from the place where he is. Tell thy Lord, answered Disteus, that if I haue done any thing for him, it was no more but a due debt which I owe him, onely for that he is brother to my Mistresse Dardanea: and bicause he may not be greeued in minde by not knowing who I am, tell him that I am Placindus, nephew to Palna, free from wounds, and I must needs stay here all alone about certaine busines that I haue agreed vpon, and that therefore he may depart, since I am greeued in nothing, wherein his care may preâˆ£uaile me, assuring him that to morrow I will stand to my word and promise. The Page maruelled much that I had so valiantly helped his Lord and him, and as he esteemed me in his mind for a tall man: so thought me to be ill brought vp by giuing him so rude an answere. For Disteus of purpose would not answere him with more humanitie, though he could do it well, bicause there was no cause as I told you to vse him well, but onely that he was brother to her, that was his onely ioy. But the page thinking it proceeded of ignoraÌ„ce & want of good education, mended (I think) the matter with his Lord touching my homely answer. Sagastes woondred (and not without great reason) when he heard that it was I, that had so manfully taken his part, and with that false opinion which from that time he had of my valour, he went home, thinking stil it was I, by whom he receiued so great a benefit. Disteus also when he saw Sagastes gone, went home to his own house, where he found me with fear for his long tarying, & carefully attending his returne. But when I saw him so ill entreaâˆ£ted, I began to chaunge colour, thinking he had beene hurt, and therefore said vnto him. What meanes this Sir? How come you home in this sort? Trouble not thy selfe, said Disteus, for I haue no hurt: and now that thou hast seene, how in thy apâˆ£parell (because I would not be knowen in Dardaneas house) I went to see thine Aunt and my mother: So I also told thee that thine Aunt was to send thee of an errant, the which bicause it lay in my way, I would also dispatch. The errant therefore that Dardanea did will thee to do was this: But giue good eare, and loose not a word of that, which I will tell thee, bicause it behooues thee much, and also bicause we may not both be taken in a lye. I say Dardanea requested thee to goe watch her brother, who (as it was told her) was accustomed to goe night by night out of his house, and to see whither he went. But it fell out, that this night my selfe doing that, which was committed to thy charge, after a good while that Sagastes came foorth, I followed him, and after this he told me particularly all the successe, as you haue now heard, and somewhat more. When I heard of the singular fauour and helpe that Disteus had done to Sagastes, I was astonished to see that with so great zeale and courage he had succoured him, who was his mortall enemie, and therefore saide vnto him. You haue filled me Sir full of woonder, for it is beyond all sence and conceit that you should be mooued to put your life in danger for one, that would bereaue you of yours. Stay (said Disteus) and hearken how the matter fals out, & thou shalt know the whole cause, whereby thou shalt vnderstand how much thou art beholding vnâˆ£to me. Thou must therfore know that to heare the musick the better (as I told thee) I came somwhat neere, thinking that by wearing thy apparell, I might not haue been