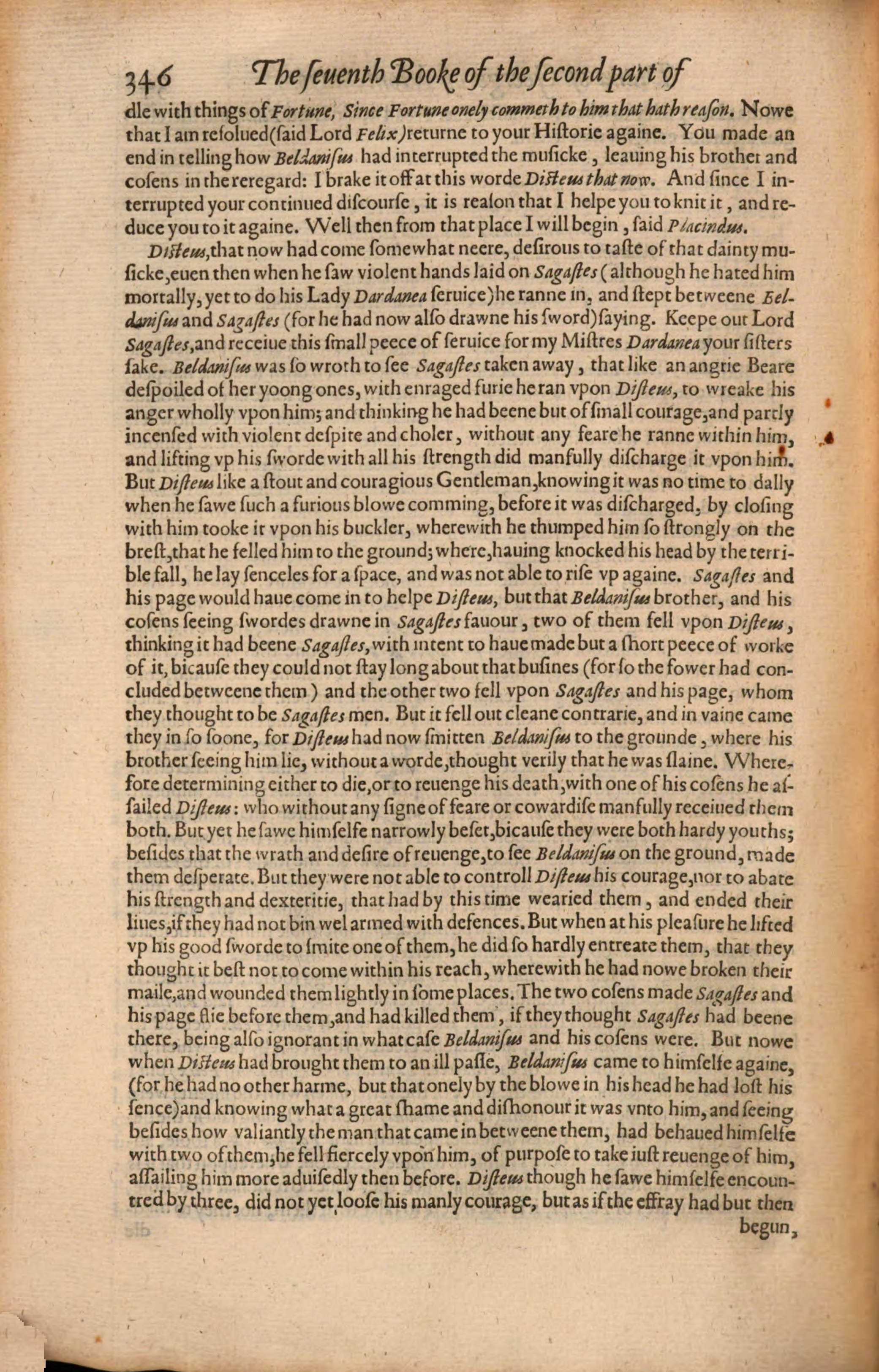 with things of Fortune, Since Fortune onely commeth to him that hath reason. Nowe that I am resolued (said Lord Felix) returne to your Historie againe. You made an end in telling how Beldanisus had interrupted the musicke, leauing his brother and cosens in the reregard: I brake it off at this worde Distcus that now. And since I inâˆ£terrupted your continued discourse, it is reason that I helpe you to knit it, and reâˆ£duce you to it againe. Well then from that place I will begin, said Placindus.
Disteus, that now had come somewhat neere, desirous to taste of that dainty muâˆ£sicke, euen then when he saw violent hands laid on Sagastes (although he hated him mortally, yet to do his Lady Dardanea seruice) he ranne in, and stept betweene Eelâˆ£danisus and Sagastes (for he had now also drawne his sword) saying. Keepe out Lord Sagastes, and receiue this small peece of seruice for my Mistres Dardanea your sisters sake. Beldanisus was so wroth to see Sagastes taken away, that like an angrie Beare despoiled of her yoong ones, with enraged furie he ran vpon Disteus, to wreake his anger wholly vpon him; and thinking he had beene but of small courage, and partly incensed with violent despite and choler, without any feare he ranne within him, and lifting vp his sworde with all his strength did manfully discharge it vpon him. But Disteus like a stout and couragious Gentleman, knowing it was no time to dally when he sawe such a furious blowe comming, before it was discharged, by closing with him tooke it vpon his buckler, wherewith he thumped him so strongly on the brest, that he felled him to the ground; where, hauing knocked his head by the terriâˆ£ble fall, he lay senceles for a space, and was not able to rise vp againe. Sagastes and his page would haue come in to helpe Disteus, but that Beldanisus brother, and his cosens seeing swordes drawne in Sagastes fauour, two of them fell vpon Disteus, thinking it had beene Sagastes, with intent to haue made but a short peece of worke of it, bicause they could not stay long about that busines (for so the fower had conâˆ£cluded betweene them) and the other two fell vpon Sagastes and his page, whom they thought to be Sagastes men. But it fell out cleane contrarie, and in vaine came they in so soone, for Disteus had now smitten Beldanisus to the grounde, where his brother seeing him lie, without a worde, thought verily that he was slaine. Whereâˆ£fore determining either to die, or to reuenge his death, with one of his cosens he asâˆ£sailed Disteus: who without any signe of feare or cowardise manfully receiued them both. But yet he sawe him selfe narrowly beset, bicause they were both hardy youths; besides that the wrath and desire of reuenge, to see Beldanisus on the ground, made them desperate. But they were not able to controll Disteus his courage, nor to abate his strength and dexteritie, that had by this time wearied them, and ended their liues, if they had not bin wel armed with defences. But when at his pleasure he lifted vp his good sworde to smite one of them, he did so hardly entreate them, that they thought it best not to come within his reach, wherewith he had nowe broken their maile, and wounded them lightly in some places. The two cosens made Sagastes and his page flie before them, and had killed them, if they thought Sagastes had beene there, being also ignorant in what case Beldanisus and his cosens were. But nowe when Disteus had brought them to an ill passe, Beldanisus came to himselfe againe, (for he had no other harme, but that onely by the blowe in his head he had lost his sence) and knowing what a great shame and dishonour it was vnto him, and seeing besides how valiantly the man that came in betweene them, had behaued himselfe with two of them, he fell fiercely vpon him, of purpose to take iust reuenge of him, assailing him more aduisedly then before. Disteus though he sawe himselfe encounâˆ£tred by three, did not yet loose his manly courage, but as if the effray had but then