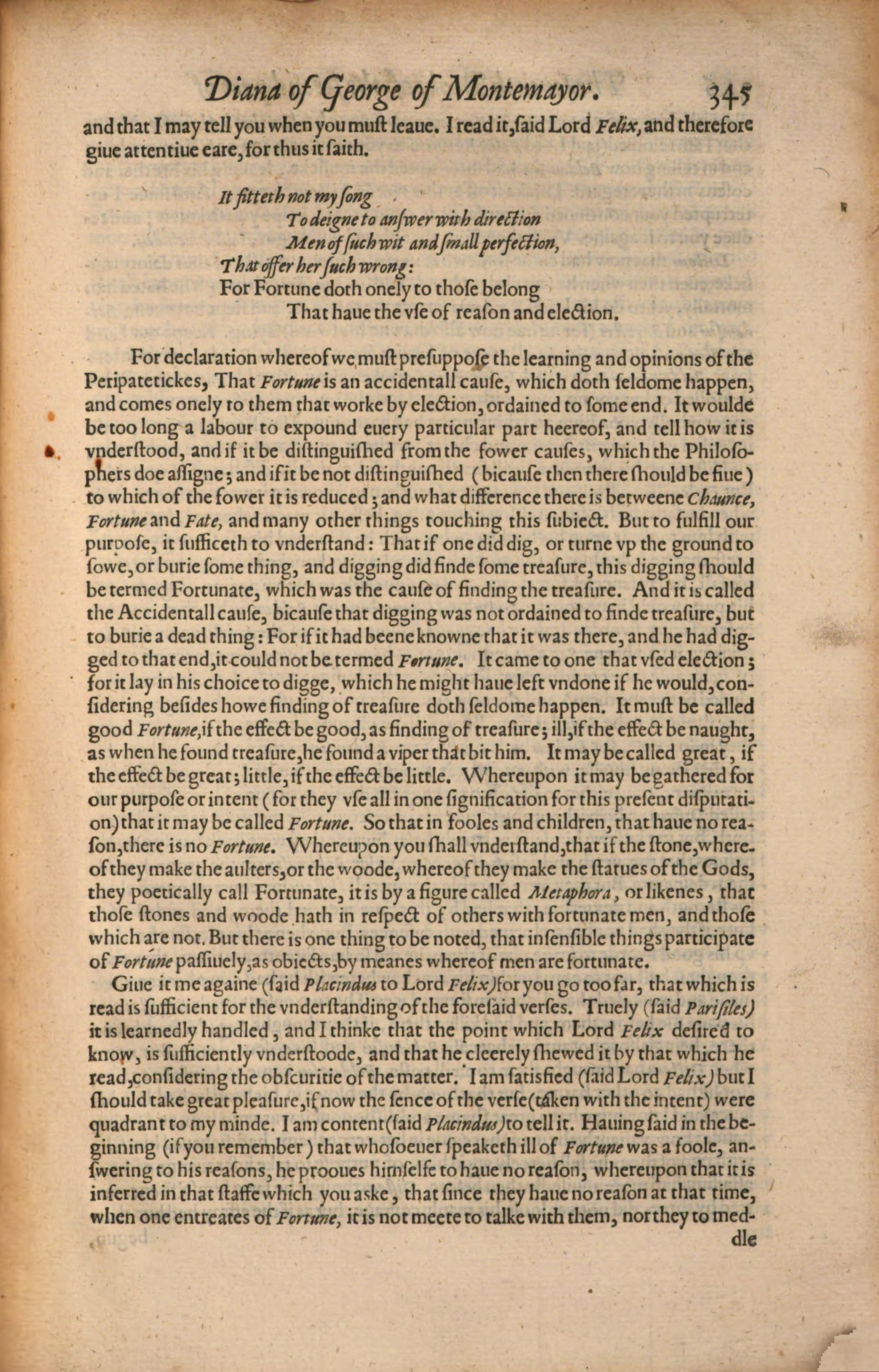 and that I may tell you when you must leaue. I read it, said Lord Felix, and therefore giue attentiue eare, for thus it saith.

It fitteth not my song
To deigne to answer with direction
Men of such wit and small perfection,
That offer her such wrong:
For Fortune doth onely to those belong
That haue the vse of reason and election.

For declaration whereof we must presuppose the learning and opinions of the Peripatetickes, That Fortune is an accidentall cause, which doth seldome happen, and comes onely to them that worke by election, ordained to some end. It woulde be too long a labour to expound euery particular part heereof, and tell how it is vnderstood, and if it be distinguished from the fower causes, which the Philosoâˆ£phers doe assigne; and if it be not distinguished (bicause then there should be fiue) to which of the fower it is reduced; and what difference there is betweene Chaunce, Fortune and Fate, and many other things touching this subiect. But to fulfill our purpose, it sufficeth to vnderstand: That if one did dig, or turne vp the ground to sowe, or burie some thing, and digging did finde some treasure, this digging should be termed Fortunate, which was the cause of finding the treasure. And it is called the Accidentall cause, bicause that digging was not ordained to finde treasure, but to burie a dead thing: For if it had beene knowne that it was there, and he had digâˆ£ged to that end, it could not be termed Fortune. It came to one that vsed election; for it lay in his choice to digge, which he might haue left vndone if he would, conâˆ£sidering besides howe finding of treasure doth seldome happen. It must be called good Fortune, if the effect be good, as finding of treasure; ill, if the effect be naught, as when he found treasure, he found a viper that bit him. It may be called great, if the effect be great; little, if the effect be little. Whereupon it may begathered for our purpose or intent (for they vse all in one signification for this present disputatiâˆ£on) that it may be called Fortune. So that in fooles and children, that haue no reaâˆ£son, there is no Fortune. Whereupon you shall vnderstand, that if the stone, whereâˆ£of they make the aulters, or the woode, whereof they make the statues of the Gods, they poetically call Fortunate, it is by a figure called Metaphora, or likenes, that those stones and woode hath in respect of others with fortunate men, and those which are not. But there is one thing to be noted, that insensible things participate of Fortune passiuely, as obiects, by meanes whereof men are fortunate.
Giue it me againe (said Placindus to Lord Felix) for you go too far, that which is read is sufficient for the vnderstanding of the foresaid verses. Truely (said Parisiles) it is learnedly handled, and I thinke that the point which Lord Felix desired to know, is sufficiently vnderstoode, and that he cleerely shewed it by that which he read, considering the obscuritie of the matter. I am satisfied (said Lord Felix) but I should take great pleasure, if now the sence of the verse (taken with the intent) were quadrant to my minde. I am content (said Placindus) to tell it. Hauing said in the beâˆ£ginning (if you remember) that whosoeuer speaketh ill of Fortune was a foole, anâˆ£swering to his reasons, he prooues himselfe to haue no reason, whereupon that it is inferred in that staffe which you aske, that since they haue no reason at that time, when one entreates of Fortune, it is not meete to talke with them, nor they to medâˆ£dle