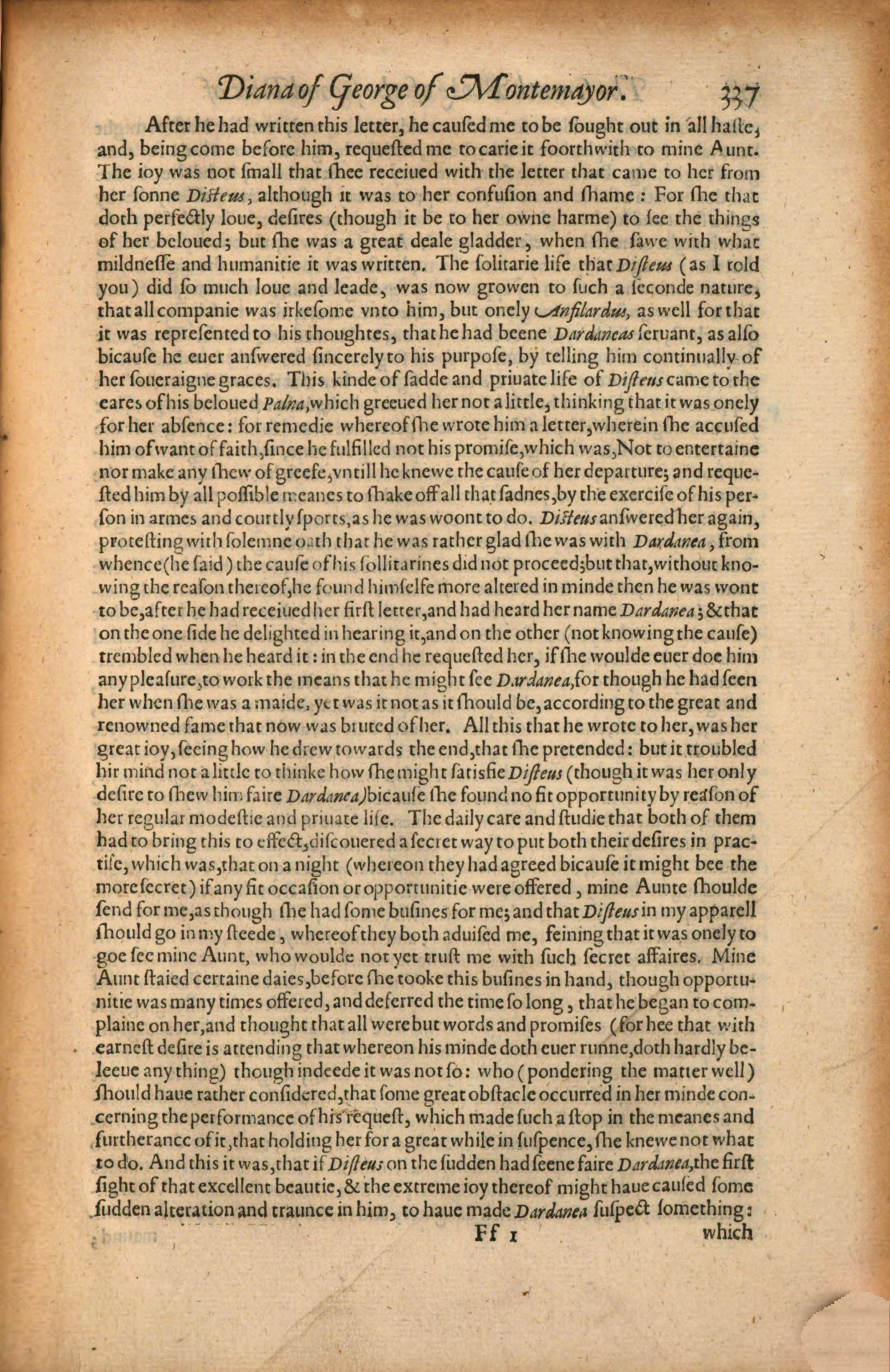 After he had written this letter, he caused me to be sought out in all haste, and, being come before him, requested me to carie it foorthwith to mine Aunt. The ioy was not small that shee receiued with the letter that came to her from her sonne Disteus, although it was to her confusion and shame: For she that doth perfectly loue, desires (though it be to her owne harme) to see the things of her beloued; but she was a great deale gladder, when she sawe with what mildnesse and humanitie it was written. The solitarie life that Disteus (as I told you) did so much loue and leade, was now growen to such a seconde nature, that all companie was irkesome vnto him, but onely Anfilardus, as well for that it was represented to his thoughtes, that he had beene Dardaneas seruant, as also bicause he euer answered sincerely to his purpose, by telling him continually of her soueraigne graces. This kinde of sadde and priuate lise of Disteus came to the eares of his beloued Palna, which greeued her not a little, thinking that it was onely for her absence: for remedie whereof she wrote him a letter, wherein she accused him of want of faith, since he fulfilled not his promise, which was, Not to entertaine nor make any shew of greefe, vntill he knewe the cause of her departure; and requeâˆ£sted him by all possible meanes to shake off all that sadnes, by the exercise of his perâˆ£son in armes and courtly sports, as he was woont to do. Disteus answered her again, protesting with solemne oath that he was rather glad she was with Dardanea, from whence (he said) the cause of his sollitarines did not proceed; but that, without knoâˆ£wing the reason thereof, he found himselfe more altered in minde then he was wont to be, after he had receiued her first letter, and had heard her name Dardanea; & that on the one side he delighted in hearing it, and on the other (not knowing the cause) trembled when he heard it: in the end he requested her, if she woulde euer doe him any pleasure, to work the means that he might see Dardanea, for though he had seen her when she was a maide, yet was it not as it should be, according to the great and renowned fame that now was bruted of her. All this that he wrote to her, was her great ioy, seeing how he drew towards the end, that she pretended: but it troubled hir mind not a little to thinke how she might satisfie Disteus (though it was her only desire to shew him faire Dardanea) bicause she found no fit opportunity by reason of her regular modestie and priuate life. The daily care and studie that both of them had to bring this to effect, discouered a secret way to put both their desires in pracâˆ£tise, which was, that on a night (whereon they had agreed bicause it might bee the more secret) if any fit occasion or opportunitie were offered, mine Aunte shoulde send for me, as though she had some busines for me; and that Disteus in my apparell should go in my steede, whereof they both aduised me, feining that it was onely to goe see mine Aunt, who woulde not yet trust me with such secret affaires. Mine Aunt staied certaine daies, before she tooke this busines in hand, though opportuâˆ£nitie was many times offered, and deferred the time so long, that he began to comâˆ£plaine on her, and thought that all were but words and promises (for hee that with earnest desire is attending that whereon his minde doth euer runne, doth hardly beâˆ£leeue any thing) though indeede it was not so: who (pondering the matter well) should haue rather considered, that some great obstacle occurred in her minde conâˆ£cerning the performance of his request, which made such a stop in the meanes and furtherance of it, that holding her for a great while in suspence, she knewe not what to do. And this it was, that if Disteus on the sudden had seene faire Dardanea, the first sight of that excellent beautie, & the extreme ioy thereof might haue caused some sudden alteration and traunce in him, to haue made Dardanea suspect something: