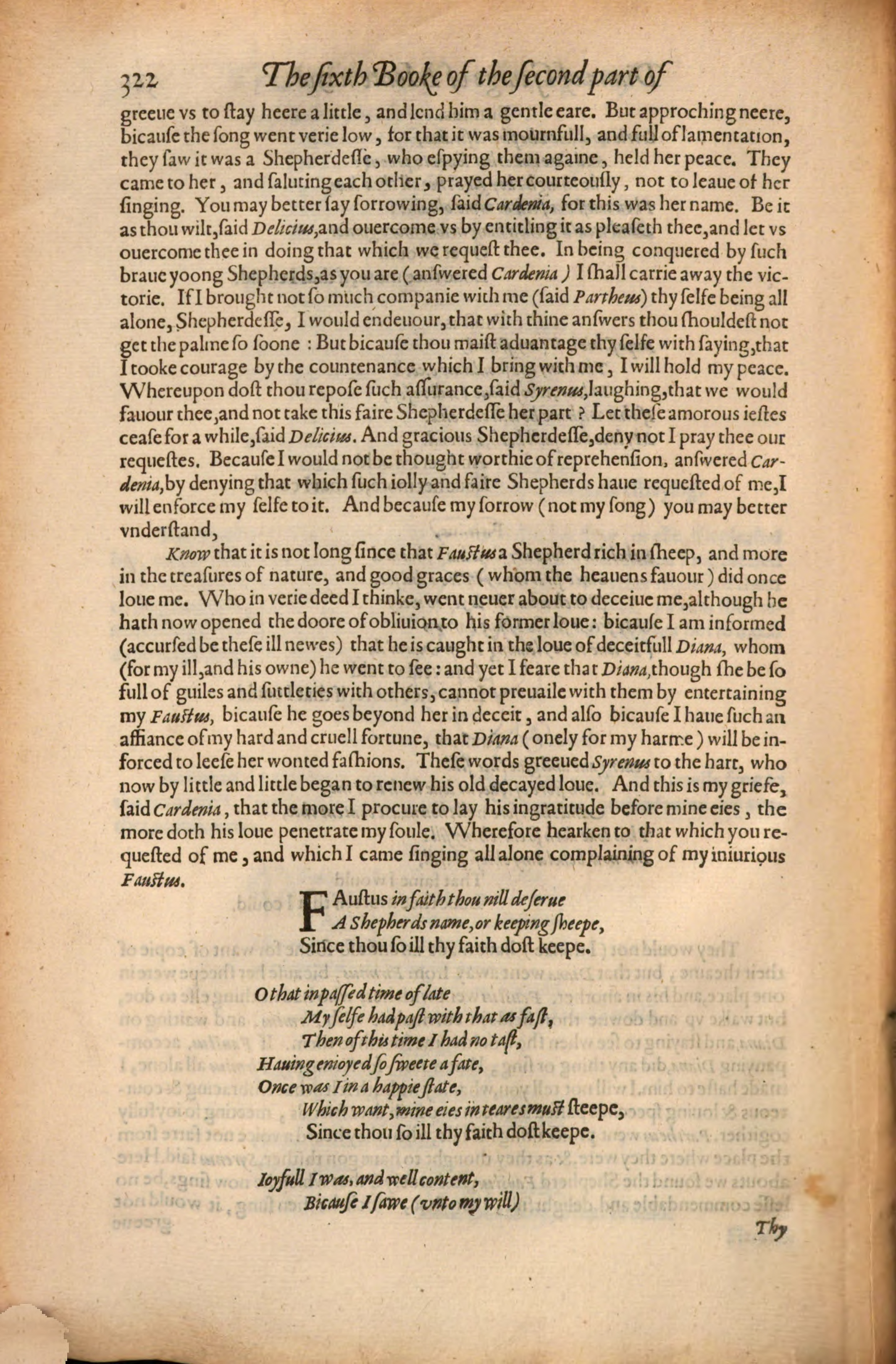 greeue vs to stay heere a little, and lend him a gentle eare. But approching neere, bicause the song went verie low, for that it was mournfull, and full of lamentation, they saw it was a Shepherdesse, who espying them againe, held her peace. They came to her, and saluting each other, prayed her courteously, not to leaue of her singing. You may better say sorrowing, said Cardenia, for this was her name. Be it as thou wilt, said Delicius, and ouercome vs by entitling it as pleaseth thee, and let vs ouercome thee in doing that which we request thee. In being conquered by such braue yoong Shepherds, as you are (answered Cardenia) I shall carrie away the vicâˆ£torie. If I brought not so much companie with me (said Partheus) thy selfe being all alone, Shepherdesse, I would endeuour, that with thine answers thou shouldest not get the palme so soone: But bicause thou maist aduantage thy selfe with saying, that I tooke courage by the countenance which I bring with me, I will hold my peace. Whereupon dost thou repose such assurance, said Syrenus, laughing, that we would fauour thee, and not take this faire Shepherdesse her part? Let these amorous iestes cease for a while, said Delicius. And gracious Shepherdesse, deny not I pray thee our requestes. Because I would not be thought worthie of reprehension, answered Carâˆ£denia, by denying that which such iolly and faire Shepherds haue requested of me, I will enforce my selfe to it. And because my sorrow (not my song) you may better vnderstand,
Know that it is not long since that Faustus a Shepherd rich in sheep, and more in the treasures of nature, and good graces (whom the heauens fauour) did once loue me. Who in verie deed I thinke, went neuer about to deceiue me, although he hath now opened the doore of obliuion to his former loue: bicause I am informed (accursed be these ill newes) that he is caught in the loue of deceitfull Diana, whom (for my ill, and his owne) he went to see: and yet I feare that Diana, though she be so full of guiles and suttleties with others, cannot preuaile with them by entertaining my Faustus, bicause he goes beyond her in deceit, and also bicause I haue such an affiance of my hard and cruell fortune, that Diana (onely for my harme) will be inâˆ£forced to leese her wonted fashions. These words greeued Syrenus to the hart, who now by little and little began to renew his old decayed loue. And this is my griefe, said Cardenia, that the more I procure to lay his ingratitude before mine eies, the more doth his loue penetrate my soule. Wherefore hearken to that which you reâˆ£quested of me, and which I came singing all alone complaining of my iniurious Faustus.