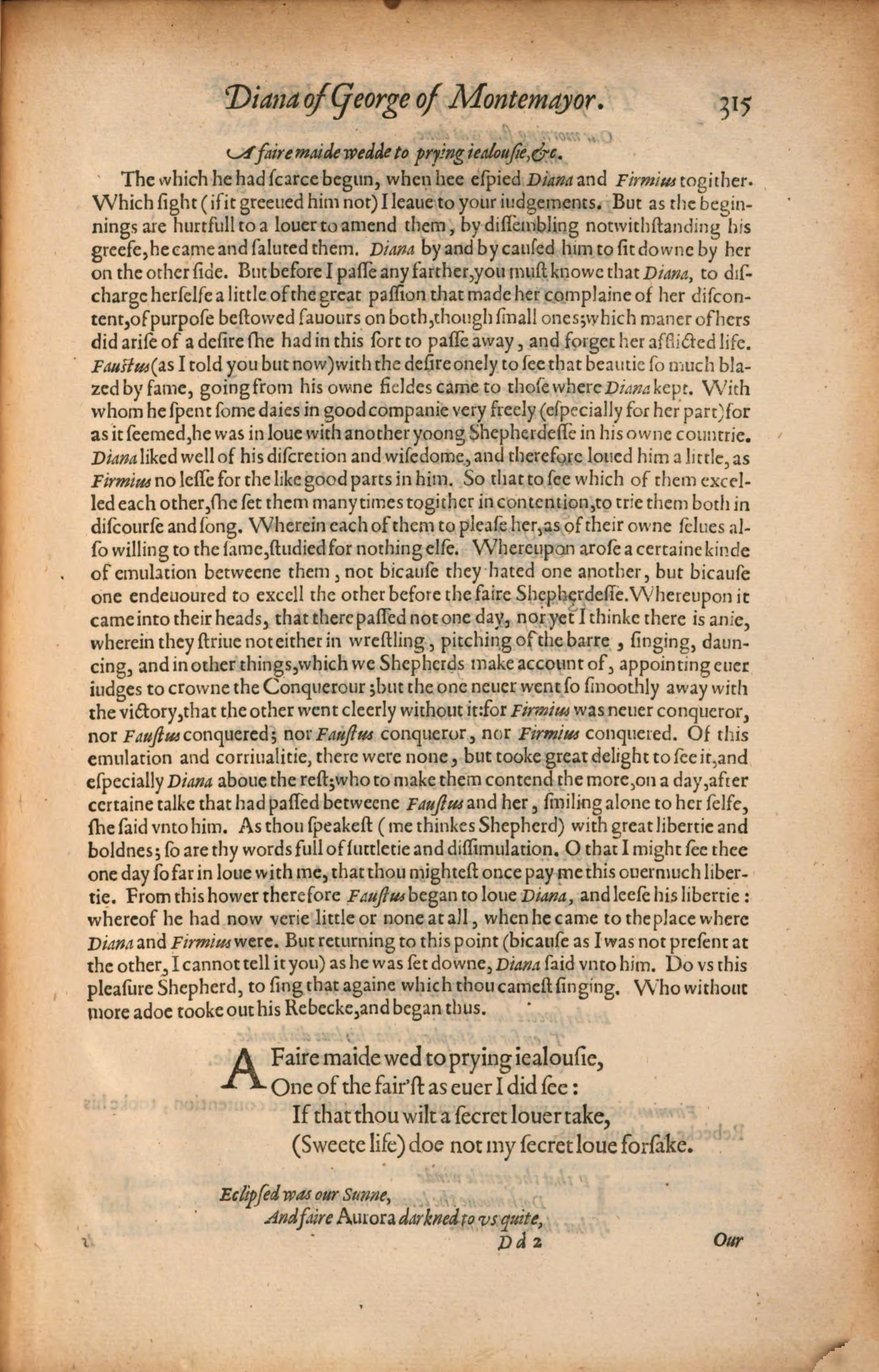 The which he had scarce begun, when hee espied Diana and Firmius togither. Which sight (if it greeued him not) I leaue to your iudgements. But as the beginâˆ£nings are hurtfull to a louer to amend them, by dissembling notwithstanding his greefe, he came and saluted them. Diana by and by caused him to sit downe by her on the other side. But before I passe any farther, you must knowe that Diana, to disâˆ£charge herselfe a little of the great passion that made her complaine of her disconâˆ£tent, of purpose bestowed fauours on both, though small ones; which maner of hers did arise of a desire she had in this sort to passe away, and forget her asslicted life. Faustus (as I told you but now) with the desire onely to see that beautie so much blaâˆ£zed by fame, going from his owne fieldes came to those where Diana kept. With whom he spent some daies in good companie very freely (especially for her part) for as it seemed, he was in loue with another yoong Shepherdesse in his owne countrie. Diana liked well of his discretion and wisedome, and therefore loued him a little, as Firmius no lesse for the like good parts in him. So that to see which of them excelâˆ£led each other, she set them many times togither in contention, to trie them both in discourse and song. Wherein each of them to please her, as of their owne selues alâˆ£so willing to the same, studied for nothing else. Whereupon arose a certaine kinde of emulation betweene them, not bicause they hated one another, but bicause one endeuoured to excell the other before the faire Shepherdesse. Whereupon it came into their heads, that there passed not one day, nor yet I thinke there is anie, wherein they striue not either in wrestling, pitching of the barre, singing, daunâˆ£cing, and in other things, which we Shepherds make account of, appointing euer iudges to crowne the Conquerour; but the one neuer went so smoothly away with the victory, that the other went cleerly without it: for Firmius was neuer conqueror, nor Faustus conquered; nor Faustus conqueror, nor Firmius conquered. Of this emulation and corriualitie, there were none, but tooke great delight to see it, and especially Diana aboue the rest; who to make them contend the more, on a day, after certaine talke that had passed betweene Faustus and her, smiling alone to her selfe, she said vnto him. As thou speakest (me thinkes Shepherd) with great libertie and boldnes; so are thy words full of suttletie and dissimulation. O that I might see thee one day so far in loue with me, that thou mightest once pay me this ouermuch liberâˆ£tie. From this hower therefore Faustus began to loue Diana, and leese his libertie: whereof he had now verie little or none at all, when he came to the place where Diana and Firmius were. But returning to this point (bicause as I was not present at the other, I cannot tell it you) as he was set downe, Diana said vnto him. Do vs this pleasure Shepherd, to sing that againe which thou camest singing. Who without more adoe tooke out his Rebecke, and began thus.

A Faire maide wed to prying iealousie,
One of the fair’st as euer I did see:
If that thou wilt a secret louer take,
(Sweete life) doe not my secret loue forsake.
Eclipsed was our Sunne,
And faire Aurora darkned to vs quite,