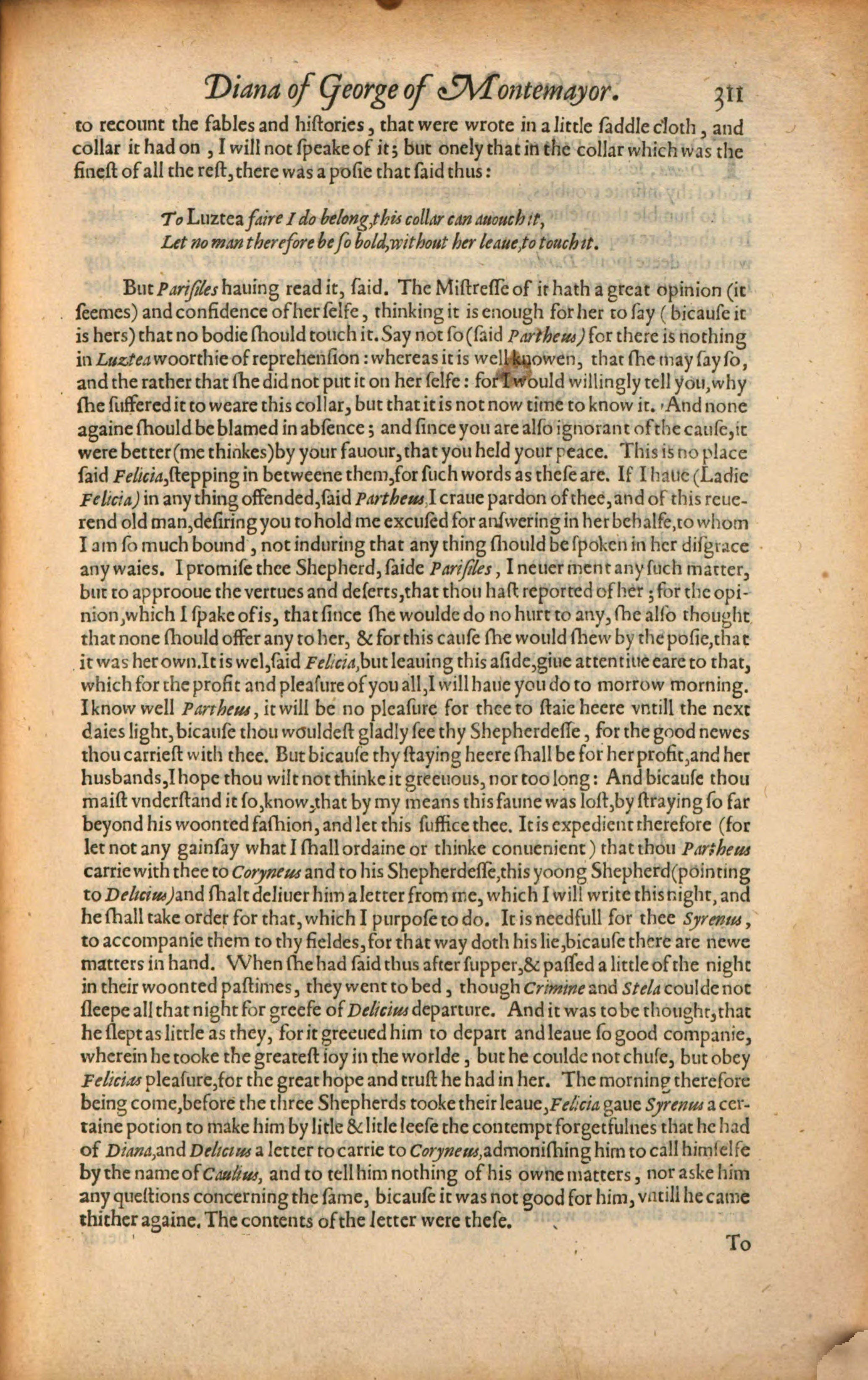 to recount the fables and histories, that were wrote in a little saddle cloth, and collar it had on, I will not speake of it; but onely that in the collar which was the finest of all the rest, there was a posie that said thus:

To Luztea faire I do belong, this collar can auouch it,

Let no man therefore be so bold, without her leaue to touch it.

But Parisiles hauing read it, said. The Mistresse of it hath a great opinion (it seemes) and confidence of her selfe, thinking it is enough for her to say (bicause it is hers) that no bodie should touch it. Say not so (said Partheus) for there is nothing in Luztea woorthie of reprehension: whereas it is well knowen, that she may say so, and the rather that she did not put it on her selfe: for I would willingly tell you, why she suffered it to weare this collar, but that it is not now time to know it. And none againe should be blamed in absence; and since you are also ignorant of the cause, it were better (me thinkes) by your fauour, that you held your peace. This is no place said Felicia, stepping in betweene them, for such words as these are. If I haue (Ladie Felicia) in any thing offended, said Partheus, I craue pardon of thee, and of this reueâˆ£rend old man, desiring you to hold me excused for answering in her behalfe, to whom I am so much bound, not induring that any thing should be spoken in her disgrace any waies. I promise thee Shepherd, saide Parisiles, I neuer ment any such matter, but to approoue the vertues and deserts, that thou hast reported of her; for the opiâˆ£nion, which I spake of is, that since she woulde do no hurt to any, she also thought that none should offer any to her, & for this cause she would shew by the posie, that it was her own. It is wel, said Felicia, but leauing this aside, giue attentiue eare to that, which for the profit and pleasure of you all, I will haue you do to morrow morning. I know well Partheus, it will be no pleasure for thee to staie heere vntill the next daies light, bicause thou wouldest gladly see thy Shepherdesse, for the good newes thou carriest with thee. But bicause thy staying heere shall be for her profit, and her husbands, I hope thou wilt not thinke it greeuous, nor too long: And bicause thou maist vnderstand it so, know, that by my means this faune was lost, by straying so far beyond his woonted fashion, and let this suffice thee. It is expedient therefore (for let not any gainsay what I shall ordaine or thinke conuenient) that thou Partheus carrie with thee to Coryneus and to his Shepherdesse, this yoong Shepherd (pointing to Delicius) and shalt deliuer him a letter from me, which I will write this night, and he shall take order for that, which I purpose to do. It is needfull for thee Syrenus, to accompanie them to thy fieldes, for that way doth his lie, bicause there are newe matters in hand. When she had said thus after supper, & passed a little of the night in their woonted pastimes, they went to bed, though Crimine and Stela coulde not sleepe all that night for greefe of Delicius departure. And it was to be thought, that he slept as little as they, for it greeued him to depart and leaue so good companie, wherein he tooke the greatest ioy in the worlde, but he coulde not chuse, but obey Felicias pleasure, for the great hope and trust he had in her. The morning therefore being come, before the three Shepherds tooke their leaue, Felicia gaue Syrenus a cerâˆ£taine potion to make him by litle & litle leese the contempt forgetfulnes that he had of Diana, and Delicius a letter to carrie to Coryneus, admonishing him to call himselfe by the name of Caulius, and to tell him nothing of his owne matters, nor aske him any questions concerning the same, bicause it was not good for him, vntill he came thither againe. The contents of the letter were these.