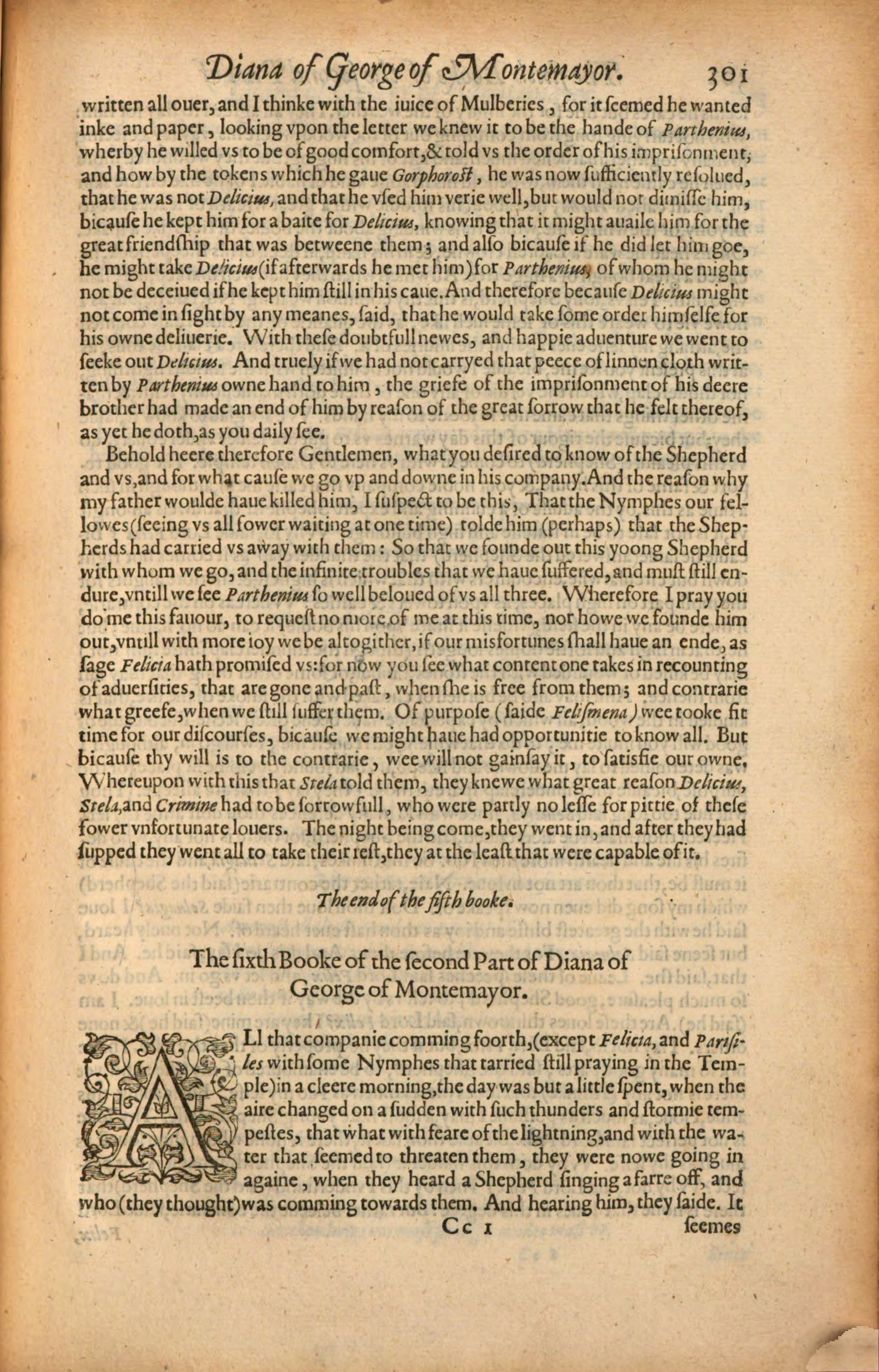 written all ouer, and I thinke with the iuice of Mulberies, for it seemed he wanted inke and paper, looking vpon the letter we knew it to be the hande of Parthenius, wherby he willed vs to be of good comfort, & told vs the order of his imprisonment, and how by the tokens which he gaue Gorphorost, he was now sufficiently resolued, that he was not Delicius, and that he vsed him verie well, but would nor dimisse him, bicause he kept him for a baite for Delicius, knowing that it might auaile him for the great friendship that was betweene them; and also bicause if he did let him goe, he might take Delicius (if afterwards he met him) for Parthenius, of whom he might not be deceiued if he kept him still in his caue. And therefore because Delicius might not come in sight by any meanes, said, that he would take some order himselfe for his owne deliuerie. With these doubtfull newes, and happie aduenture we went to seeke out Delicius. And truely if we had not carryed that peece of linnen cloth writâˆ£ten by Parthenius owne hand to him, the griefe of the imprisonment of his deere brother had made an end of him by reason of the great sorrow that he felt thereof, as yet he doth, as you daily see.
Behold heere therefore Gentlemen, what you desired to know of the Shepherd and vs, and for what cause we go vp and downe in his company. And the reason why my father woulde haue killed him, I suspect to be this, That the Nymphes our felâˆ£lowes (seeing vs all fower waiting at one time) tolde him (perhaps) that the Shepâˆ£herds had carried vs away with them: So that we founde out this yoong Shepherd with whom we go, and the infinite troubles that we haue suffered, and must still enâˆ£dure, vntill we see Parthenius so well beloued of vs all three. Wherefore I pray you do me this fauour, to request no more of me at this time, nor howe we founde him out, vntill with more ioy we be altogither, if our misfortunes shall haue an ende, as sage Felicia hath promised vs: for now you see what content one takes in recounting of aduersities, that are gone and past, when she is free from them; and contrarie what greefe, when we still suffer them. Of purpose (saide Felismena) wee tooke fit time for our discourses, bicause we might haue had opportunitie to know all. But bicause thy will is to the contrarie, wee will not gainsay it, to satisfie our owne. Whereupon with this that Stela told them, they knewe what great reason Delicius, Stela, and Crimine had to be sorrowfull, who were partly no lesse for pittie of these fower vnfortunate louers. The night being come, they went in, and after they had supped they went all to take their rest, they at the least that were capable of it.

The sixth Booke of the second Part of Diana of George of Montemayor.

ALl that companie comming foorth, (except Felicta, and Parisiâˆ£les with some Nymphes that tarried still praying in the Temâˆ£ple) in a cleere morning, the day was but a little spent, when the aire changed on a sudden with such thunders and stormie temâˆ£pestes, that what with feare of the lightning, and with the waâˆ£ter that seemed to threaten them, they were nowe going in againe, when they heard a Shepherd singing a farre off, and who (they thought) was comming towards them. And hearing him, they saide. It