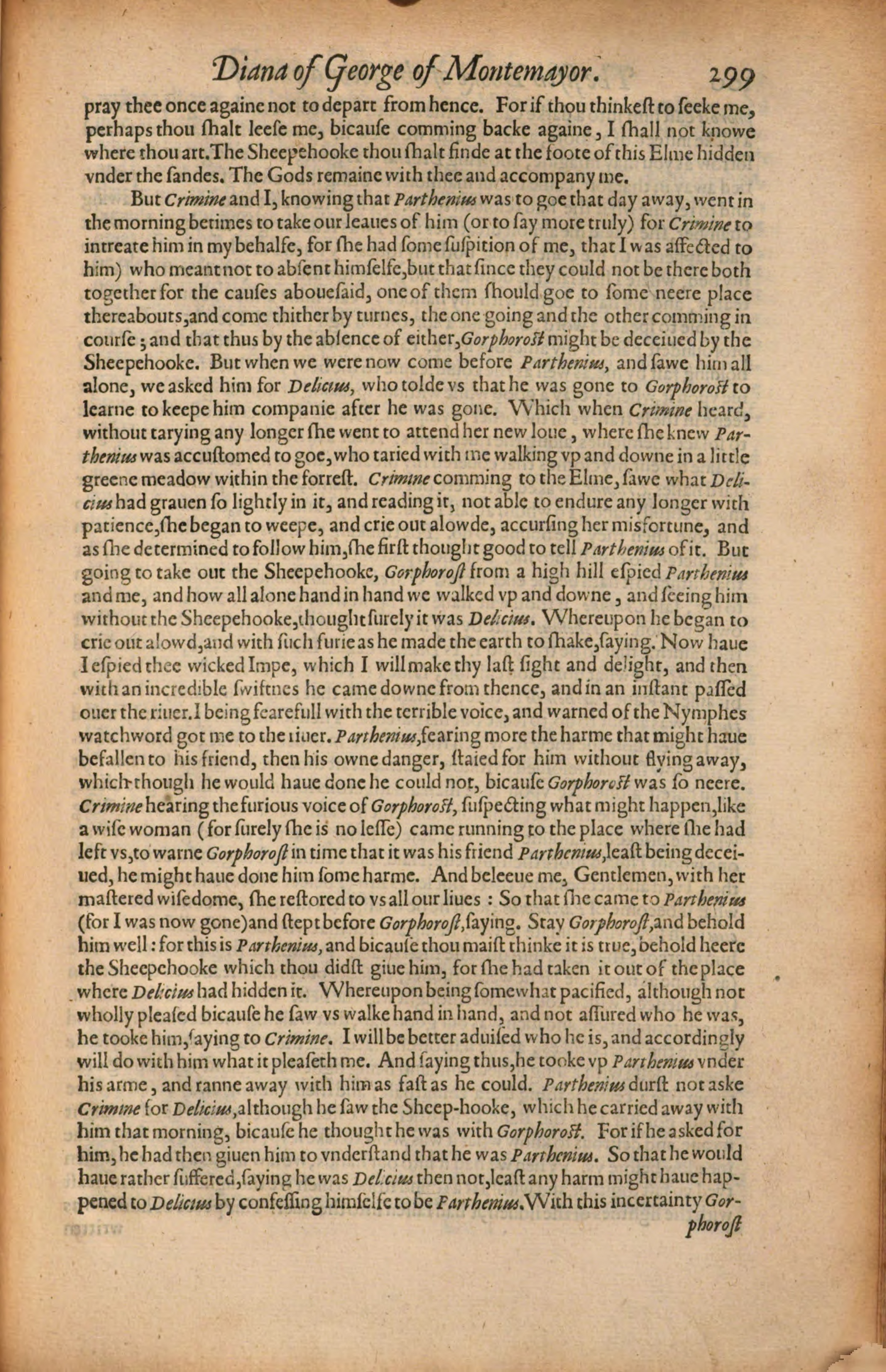 pray thee once againe not to depart from hence. For if thou thinkest to seeke me, perhaps thou shalt leese me, bicause comming backe againe, I shall not knowe where thou art. The Sheepehooke thou shalt finde at the foote of this Elme hidden vnder the sandes. The Gods remaine with thee and accompany me.
But Crimine and I, knowing that Parthenius was to goe that day away, went in the morning betimes to take our leaues of him (or to say more truly) for Crimine to intreate him in my behalfe, for she had some suspition of me, that I was affected to him) who meant not to absent himselfe, but that since they could not be there both together for the causes abouesaid, one of them should goe to some neere place thereabouts, and come thither by turnes, the one going and the other comming in course; and that thus by the absence of either, Gorphorost might be deceiued by the Sheepehooke. But when we were now come before Parthenius, and sawe him all alone, we asked him for Delicius, who tolde vs that he was gone to Gorphorost to learne to keepe him companie after he was gone. Which when Crimine heard, without tarying any longer she went to attend her new loue, where she knew Parâˆ£thenius was accustomed to goe, who taried with me walking vp and downe in a little greene meadow within the forrest. Crimine comming to the Elme, sawe what Deliâˆ£cius had grauen so lightly in it, and reading it, not able to endure any longer with patience, she began to weepe, and crie out alowde, accursing her misfortune, and as she determined to follow him, she first thought good to tell Parthenius of it. But going to take out the Sheepehooke, Gorphorost from a high hill espied Parthenius and me, and how all alone hand in hand we walked vp and downe, and seeing him without the Sheepehooke, thought surely it was Delicius. Whereupon he began to crie out alowd, and with such furie as he made the earth to shake, saying. Now haue I espied thee wicked Impe, which I will make thy last sight and delight, and then with an incredible swiftnes he came downe from thence, and in an instant passed ouer the riuer. I being fearefull with the terrible voice, and warned of the Nymphes watchword got me to the riuer. Parthenius, fearing more the harme that might haue befallen to his friend, then his owne danger, staied for him without flying away, which though he would haue done he could not, bicause Gorphorost was so neere. Crimine hearing the furious voice of Gorphorost, suspecting what might happen, like a wise woman (for surely she is no lesse) came running to the place where she had left vs, to warne Gorphorost in time that it was his friend Parthenius, least being deceiâˆ£ued, he might haue done him some harme. And beleeue me, Gentlemen, with her mastered wisedome, she restored to vs all our liues: So that she came to Parthenius (for I was now gone) and stept before Gorphorost, saying. Stay Gorphorost, and behold him well: for this is Parthenius, and bicause thou maist thinke it is true, behold heere the Sheepehooke which thou didst giue him, for she had taken it out of the place where Delicius had hidden it. Whereupon being somewhat pacified, although not wholly pleased bicause he saw vs walke hand in hand, and not assured who he was, he tooke him, saying to Crimine. I will be better aduised who he is, and accordingly will do with him what it pleaseth me. And saying thus, he tooke vp Parthenius vnder his arme, and ranne away with him as fast as he could. Parthenius durst not aske Crimine for Delicius, although he saw the Sheep-hooke, which he carried away with him that morning, bicause he thought he was with Gorphorost. For if he asked for him, he had then giuen him to vnderstand that he was Parthenius. So that he would haue rather suffered, saying he was Delicius then not, least any harm might haue hapâˆ£pened to Delicius by confessing himselfe to be Parthenius. With this incertainty Gorâˆ£phorost