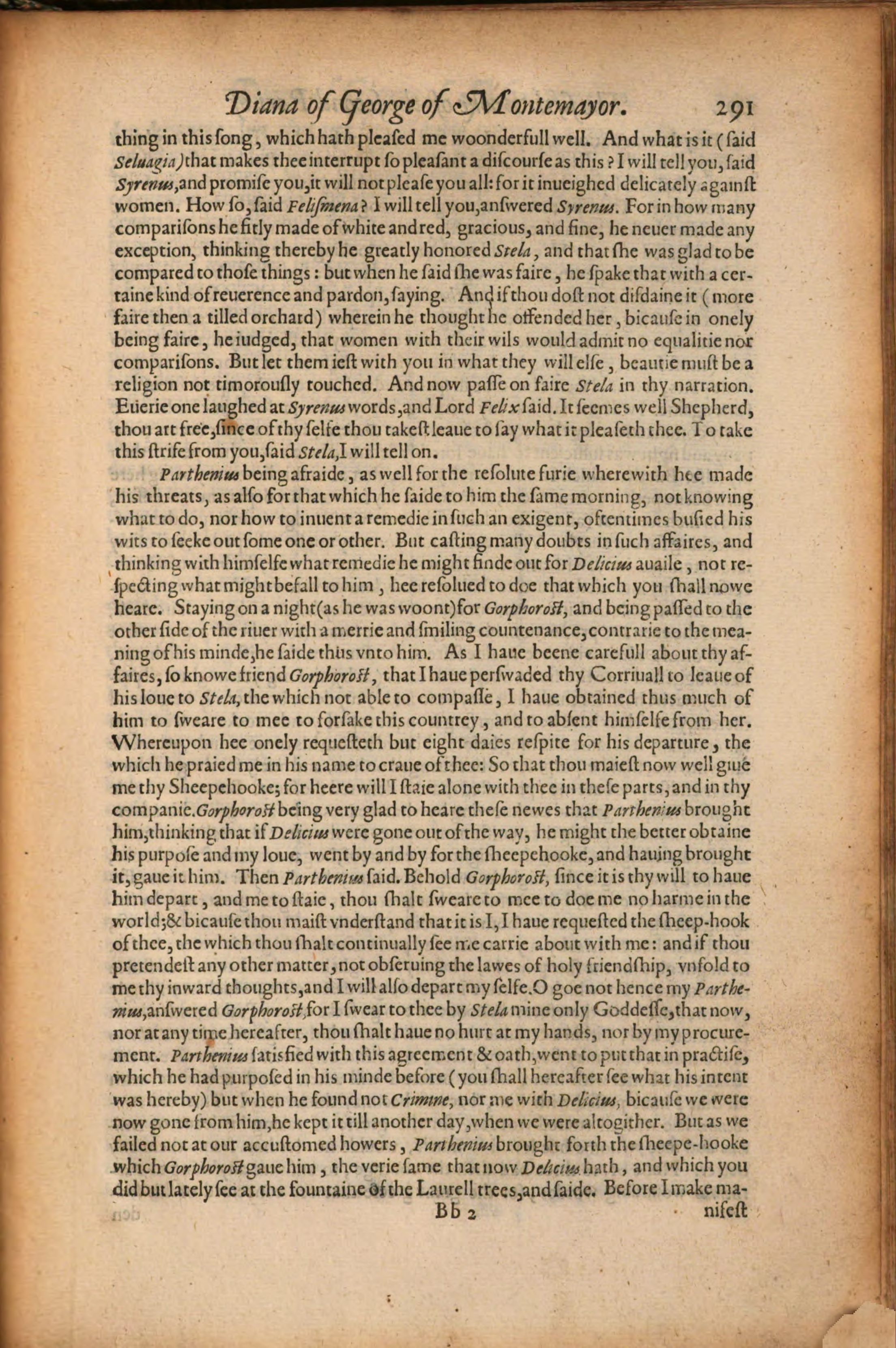 thing in this song, which hath pleased me woonderfull well. And what is it (said Seluagia) that makes thee interrupt so pleasant a discourse as this? I will tell you, said Syrenus, and promise you, it will not please you all: for it inueighed delicately against women. How so, said Felismena? I will tell you, answered Syrenus. For in how many comparisons he fitly made of white and red, gracious, and fine, he neuer made any exception, thinking thereby he greatly honored Stela, and that she was glad to be compared to those things: but when he said she was faire, he spake that with a cerâˆ£taine kind of reuerence and pardon, saying. And if thou dost not disdaine it (more faire then a tilled orchard) wherein he thought he offended her, bicause in onely being faire, he iudged, that women with their wils would admit no equalitie nor comparisons. But let them iest with you in what they will else, beautie must be a religion not timorously touched. And now passe on faire Stela in thy narration. Euerie one laughed at Syrenus words, and Lord Felix said. It seemes well Shepherd, thou art free, since of thy selfe thou takest leaue to say what it pleaseth thee. To take this strife from you, said stela, I will tell on. Parthenius being afraide, as well for the resolute furie wherewith hee made his threats, as also for that which he saide to him the same morning, not knowing what to do, nor how to inuent a remedie in such an exigent, oftentimes busied his wits to seeke out some one or other. But casting many doubts in such affaires, and thinking with himselfe what remedie he might finde out for Delicius auaile, not reâˆ£specting what might befall to him, hee resolued to doe that which you shall nowe heare. Staying on a night (as he was woont) for Gorphorost, and being passed to the other side of the riuer with a merrie and smiling countenance, contrarie to the meaâˆ£ning of his minde, he saide thus vnto him. As I haue beene carefull about thy afâˆ£faires, so knowe friend Gorphorost, that I haue perswaded thy Corriuall to leaue of his loue to Stela, the which not able to compasse, I haue obtained thus much of him to sweare to mee to forsake this countrey, and to absent himselfe from her. Whereupon hee onely requesteth but eight daies respite for his departure, the which he praied me in his name to craue of thee: So that thou maiest now well giue me thy Sheepehooke; for heere will I staie alone with thee in these parts, and in thy companie. Gorphorost being very glad to heare these newes that Parthenius brought him, thinking that if Delicius were gone out of the way, he might the better obtaine his purpose and my loue, went by and by for the sheepehooke, and hauing brought it, gaue it him. Then Parthenius said. Behold Gorphorost, since it is thy will to haue him depart, and me to staie, thou shalt sweare to mee to doe me no harme in the world; & bicause thou maist vnderstand that it is I, I haue requested the sheep-hook of thee, the which thou shalt continually see me carrie about with me: and if thou pretendest any other matter, not obseruing the lawes of holy friendship, vnfold to me thy inward thoughts, and I will also depart my selfe O goe not hence my Partheâˆ£nius, answered Gorphorost, for I swear to thee by Stela mine only Goddesse, that now, nor at any time hereafter, thou shalt haue no hurt at my hands, nor by my procureâˆ£ment. Parthenius satisfied with this agreement & oath, went to put that in practise, which he had purposed in his minde before (you shall hereafter see what his intent was hereby) but when he found not Crimine, nor me with Delicius, bicause we were now gone from him, he kept it till another day, when we were altogither. But as we failed not at our accustomed howers, Parthenius brought forth the sheepe-hooke which Gorphorost gaue him, the verie same that now Delicius hath, and which you did but lately see at the fountaine of the Laurell trees, and saide. Before I make maâˆ£nifest