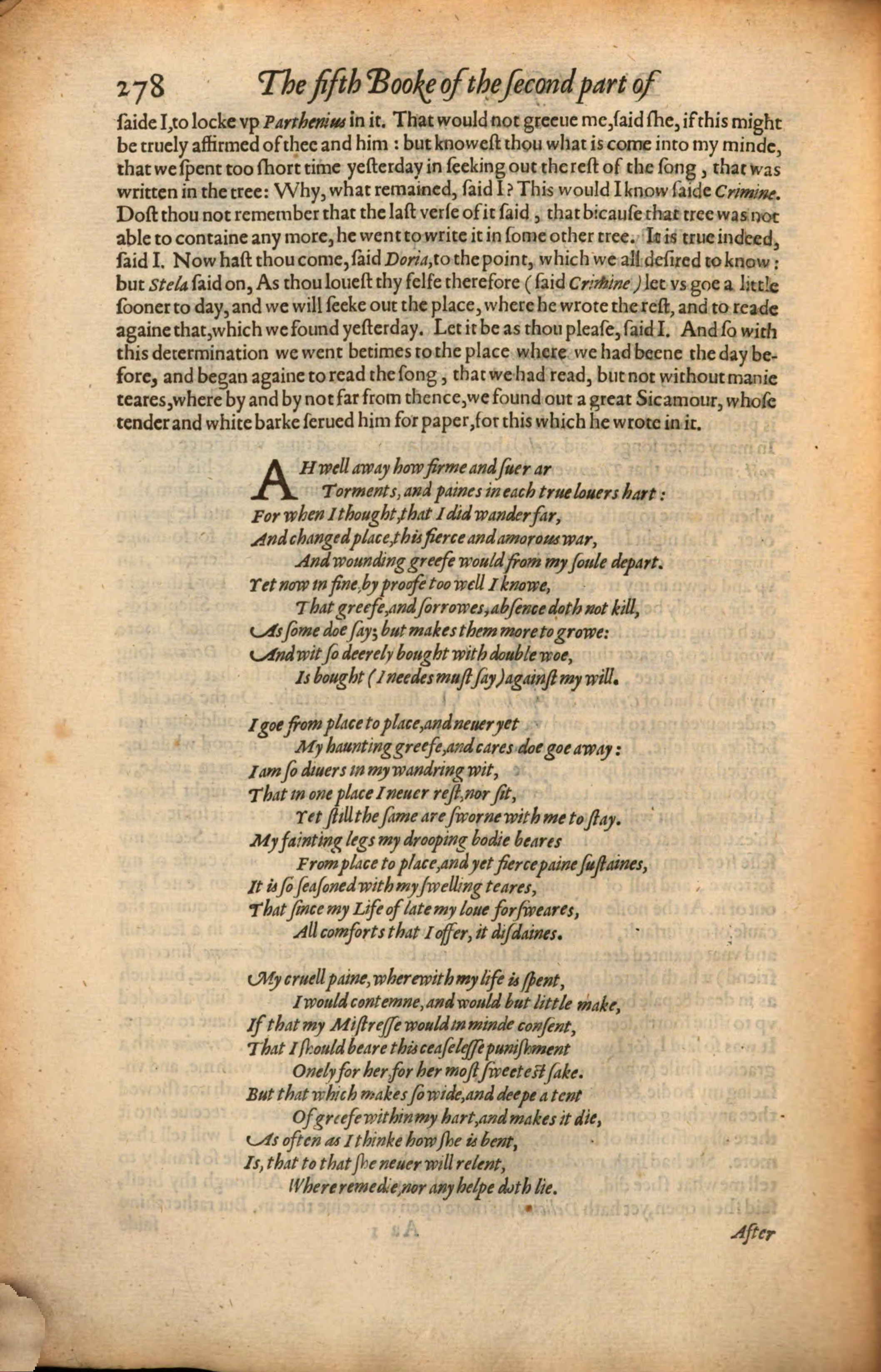 saide I, to locke vp Parthenius in it. That would not greeue me, said she, if this might be truely affirmed of thee and him: but knowest thou what is come into my minde, that we spent too short time yesterday in seeking out the rest of the song, that was written in the tree: Why, what remained, said I? This would I know saide Crimine. Dost thou not remember that the last verse of it said, that bicause that tree was not able to containe any more, he went to write it in some other tree. It is true indeed, said I. Now hast thou come, said Doria, to the point, which we all desired to know: but Stela said on, As thou louest thy felse therefore (said Crimine) let vs goe a little sooner to day, and we will seeke out the place, where he wrote the rest, and to reade againe that, which we found yesterday. Let it be as thou please, said I. And so with this determination we went betimes to the place where we had beene the day beâˆ£fore, and began againe to read the song, that we had read, but not without manie teares, where by and by not far from thence, we found out a great Sicamour, whose tender and white barke serued him for paper, for this which he wrote in it.

AH well away how firme and suer ar
Torments, and paines in each true louers hart:
For when I thought, that I did wander far,
And changed place, this fierce and amorous war,
And wounding greefe would from my soule depart.
Yet now in fine by proofe too well I knowe,
That greefe, and sorrowes, absence doth not kill,
As some doe say; but makes them more to growe:
And wit so deerely bought with double woe,
Is bought (I needes must say) against my will.
I goe from place to place, and neuer yet
My haunting greefe, and cares doe goe away:
I am so diuers in my wandring wit,
That in one place I neuer rest, nor sit,
Yet still the same are sworne with me to stay.
My fainting legs my drooping bodie beares
From place to place, and yet fierce paine sustaines,
It is so seasoned with my swelling teares,
That since my Life of late my loue for sweares,
All comforts that I offer, it disdaines.
My cruell paine, wherewith my life is spent,
I would contemne, and would but little make,
If that my Mistresse would in minde consent,
That I should beare this ceaselesse punishment
Onely for her for her most sweetest sake.
But that which makes so wide, and deepe a tent
Of greefe within my hart, and makes it die,
As often as I thinke how she is bent,
Is, that to that she neuer will relent,
Where remedie, nor any helpe doth lie.