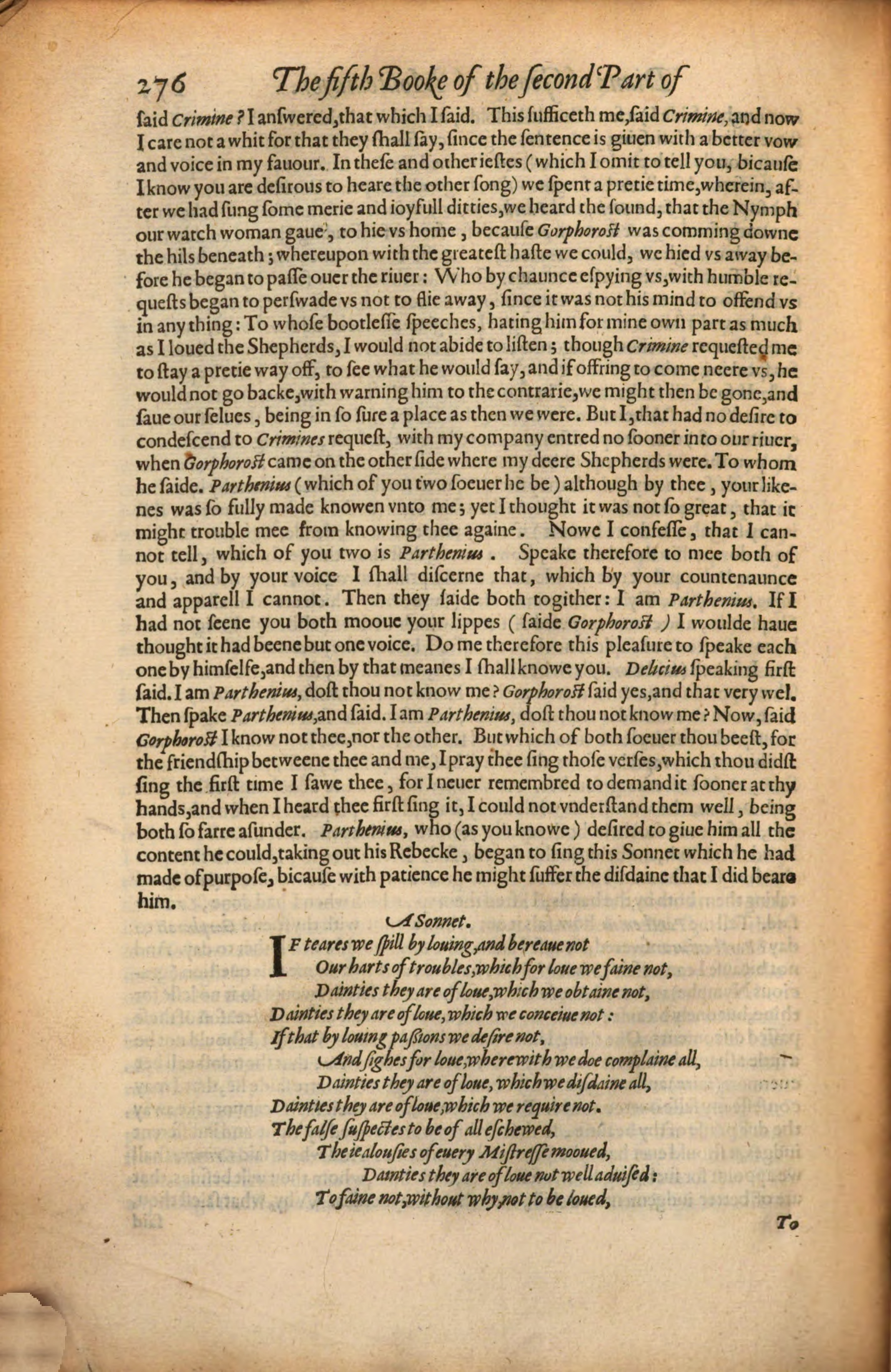 said Crimine? I answered, that which I said. This sufficeth me, said Crimine, and now I care not a whit for that they shall say, since the sentence is giuen with a better vow and voice in my fauour. In these and other iestes (which I omit to tell you, bicause I know you are desirous to heare the other song) we spent a pretie time, wherein, afâˆ£ter we had sung some merie and ioyfull ditties, we heard the sound, that the Nymph our watch woman gaue, to hie vs home, because Gorphorost was comming downe the hils beneath; whereupon with the greatest haste we could, we hied vs away beâˆ£fore he began to passe ouer the riuer: Who by chaunce espying vs, with humble reâˆ£quests began to perswade vs not to flie away, since it was not his mind to offend vs in any thing: To whose bootlesse speeches, hating him for mine own part as much as I loued the Shepherds, I would not abide to listen; though Crimine requested me to stay a pretie way off, to see what he would say, and if offring to come neere vs, he would not go backe, with warning him to the contrarie, we might then be gone, and saue our selues, being in so sure a place as then we were. But I, that had no desire to condescend to Crimines request, with my company entred no sooner into our riuer, when Gorphorost came on the other side where my deere Shepherds were. To whom he saide. Parthenius (which of you two soeuer he be) although by thee, your likeâˆ£nes was so fully made knowen vnto me; yet I thought it was not so great, that it might trouble mee from knowing thee againe. Nowe I confesse, that I canâˆ£not tell, which of you two is Parthenius. Speake therefore to mee both of you, and by your voice I shall discerne that, which by your countenaunce and apparell I cannot. Then they saide both togither: I am Parthenius. If I had not seene you both mooue your lippes (saide Gorphorost) I woulde haue thought it had beene but one voice. Do me therefore this pleasure to speake each one by himselfe, and then by that meanes I shall knowe you. Delicius speaking first said. I am Parthenius, dost thou not know me Gorphorost said yes, and that very wel. Then spake Parthenius, and said. I am Parthenius, dost thou not know me? Now, said Gorphorost I know not thee, nor the other. But which of both soeuer thou beest, for the friendship betweene thee and me, I pray thee sing those verses, which thou didst sing the first time I sawe thee, for I neuer remembred to demand it sooner at thy hands, and when I heard thee first sing it, I could not vnderstand them well, being both so farre asunder. Parthenius, who (as you knowe) desired to giue him all the content he could, taking out his Rebecke, began to sing this Sonnet which he had made of purpose, bicause with patience he might suffer the disdaine that I did beare him.