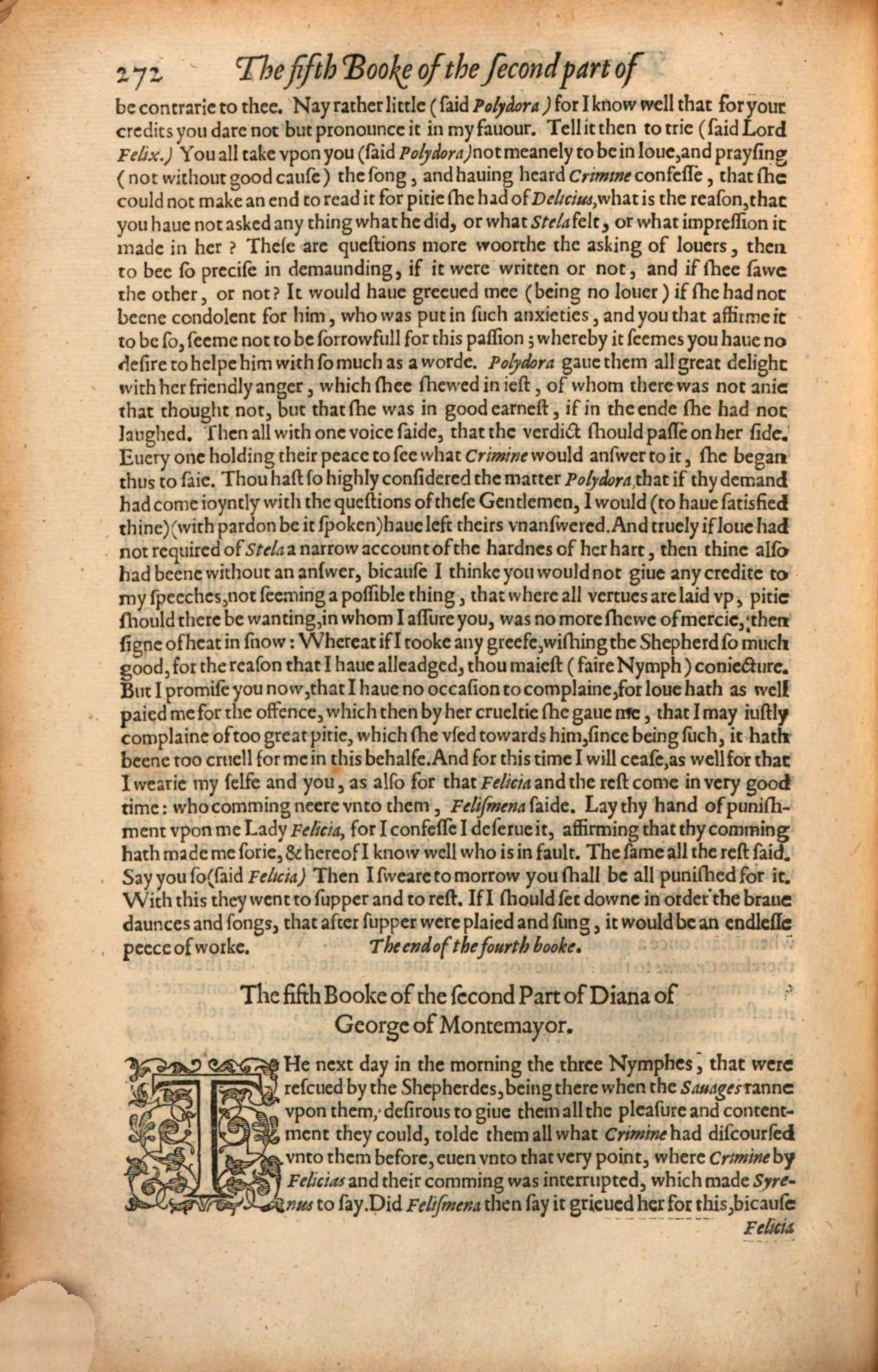 be contrarie to thee. Nay rather little (said Polydora) for I know well that for your credits you dare not but pronounce it in my fauour. Tell it then to trie (said Lord Felix.) You all take vpon you (said Polydora) not meanely to be in loue, and praysing (not without good cause) the song, and hauing heard Crimine confesse, that she could not make an end to read it for pitie she had of Delicius, what is the reason, that you haue not asked any thing what he did, or what Stela felt, or what impression it made in her? These are questions more woorthe the asking of louers, then to bee so precise in demaunding, if it were written or not, and if shee sawe the other, or not? It would haue greeued mee (being no louer) if she had not beene condolent for him, who was put in such anxieties, and you that affirme it to be so, seeme not to be sorrowfull for this passion; whereby it seemes you haue no desire to helpe him with so much as a worde. Polydora gaue them all great delight with her friendly anger, which shee shewed in iest, of whom there was not anie that thought not, but that she was in good earnest, if in the ende she had not laughed. Then all with one voice saide, that the verdict should passe on her side. Euery one holding their peace to see what Crimine would answer to it, she began thus to saie. Thou hast so highly considered the matter Polydora that if thy demand had come ioyntly with the quesions of these Gentlemen, I would (to haue satisfied thine) (with pardon be it spoken) haue left theirs vnanswered. And truely if loue had not required of Stela a narrow account of the hardnes of her hart, then thine also had beene without an answer, bicause I thinke you would not giue any credite to my speeches, not seeming a possible thing, that where all vertues are laid vp, pitie should there be wanting, in whom I assure you, was no more shewe of mercie, then signe of heat in snow: Whereat if I tooke any greefe, wishing the Shepherd so much good, for the reason that I haue alleadged, thou maiest (faire Nymph) coniecture. But I promise you now, that I haue no occasion to complaine, for loue hath as well paied me for the offence, which then by her crueltie she gaue me, that I may iustly complaine of too great pitie, which she vsed towards him, since being such, it hath beene too cruell for me in this behalfe. And for this time I will cease, as well for that I wearie my selfe and you, as also for that Felicia and the rest come in very good time: who comming neere vnto them, Felismena saide. Lay thy hand of punishâˆ£ment vpon me Lady Felicia, for I confesse I deserue it, affirming that thy comming hath made me sorie, & hereof I know well who is in fault. The same all the rest said. Say you so (said Felicia) Then I sweare to morrow you shall be all punished for it. With this they went to supper and to rest. If I should set downe in order the braue daunces and songs, that after supper were plaied and sung, it would be an endlesse peece of worke.

The end of the fourth booke.

The fifth Booke of the second Part of Diana of George of Montemayor.

THe next day in the morning the three Nymphes, that were rescued by the Shepherdes, being there when the Sauages ranne vpon them, desirous to giue them all the pleasure and contentâˆ£ment they could, tolde them all what Crimine had discoursed vnto them before, euen vnto that very point, where Crimine by Felicias and their comming was interrupted, which made Syreâˆ£nus to say. Did Felismena then say it grieued her for this, bicause