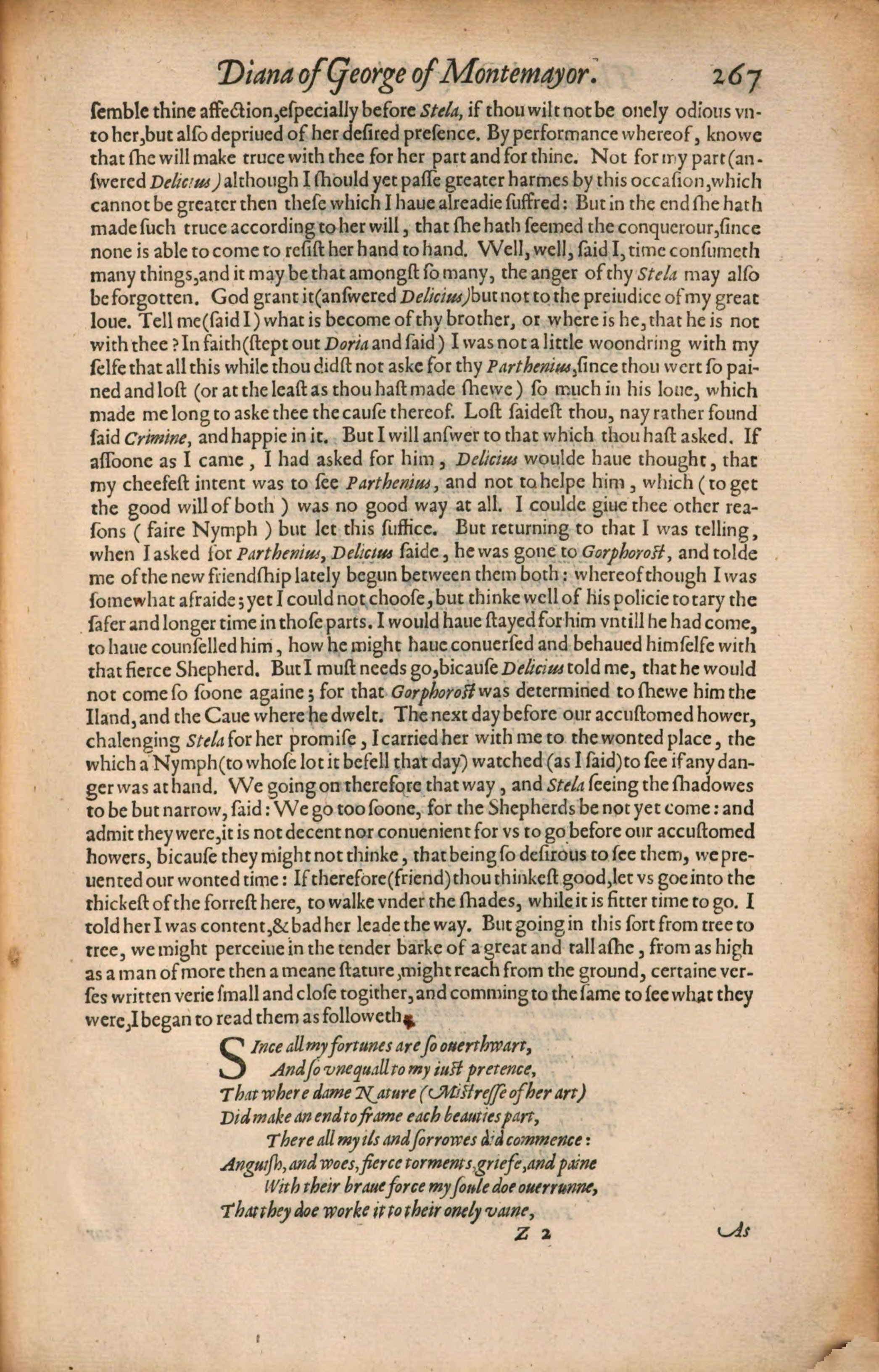 thine affection, especially before Stela, if thou wilt not be onely odious vnâˆ£to her, but also depriued of her desired presence. By performance whereof, knowe that she will make truce with thee for her part and for thine. Not for my part (anâˆ£swered Delicius) although I should yet passe greater harmes by this occasion, which cannot be greater then these which I haue alreadie suffred: But in the end she hath made such truce according to her will, that she hath seemed the conquerour, since none is able to come to resist her hand to hand. Well, well, said I, time consumeth many things, and it may be that amongst so many, the anger of thy Stela may also be forgotten. God grant it (answered Delicius) but not to the preiudice of my great loue. Tell me (said I) what is become of thy brother, or where is he, that he is not with thee? In faith (stept out Doria and said) I was not a little woondring with my selfe that all this while thou didst not aske for thy Parthenius, since thou wert so paiâˆ£ned and lost (or at the least as thou hast made shewe) so much in his loue, which made me long to aske thee the cause thereof. Lost saidest thou, nay rather found said Crimine, and happie in it. But I will answer to that which thou hast asked. If assoone as I came, I had asked for him, Delicius woulde haue thought, that my cheefest intent was to see Parthenius, and not to helpe him, which (to get the good will of both) was no good way at all. I coulde giue thee other reaâˆ£sons (faire Nymph) but let this suffice. But returning to that I was telling, when I asked for Parthenius, Delicius saide, he was gone to Gorphorost, and tolde me of the new friendship lately begun between them both: whereof though I was somewhat afraide; yet I could not thoose, but thinke well of his policie to tary the safer and longer time in those parts. I would haue stayed for him vntill he had come, to haue counselled him, how he might haue conuersed and behaued himselfe with that fierce Shepherd. But I must needs go, bicause Delicius told me, that he would not come so soone againe; for that Gorphorost was determined to shewe him the Iland, and the Caue where he dwelt. The next day before our accustomed hower, chalenging Stela for her promise, I carried her with me to the wonted place, the which a Nymph (to whose lot it befell that day) watched (as I said) to see if any danâˆ£ger was at hand. We going on therefore that way, and Stela seeing the shadowes to be but narrow, said: We go too soone, for the Shepherds be not yet come: and admit they were, it is not decent nor conuenient for vs to go before our accustomed howers, bicause they might not thinke, that being so desirous to see them, we preâˆ£uented our wonted time: If therefore (friend) thou thinkest good, let vs goe into the thickest of the forrest here, to walke vnder the shades, while it is fitter time to go. I told her I was content, & bad her leade the way. But going in this sort from tree to tree, we might perceiue in the tender barke of a great and tall ashe, from as high as a man of more then a meane stature, might reach from the ground, certaine verâˆ£ses written verie small and close togither, and comming to the same to see what they were, I began to read them as followeth.

SInce all my fortunes are so ouerthwart,
And so vnequall to my iust pretence,
That where dame Nature (Mistresse of her art)
Did make an end to frame each beauties part,
There all my ils and sorrowes did commence:
Auguish, and woes, fierce torments, griefe, and paine
With their braue force my soule doe ouerrunne,
That they doe worke it to their onely vaine,