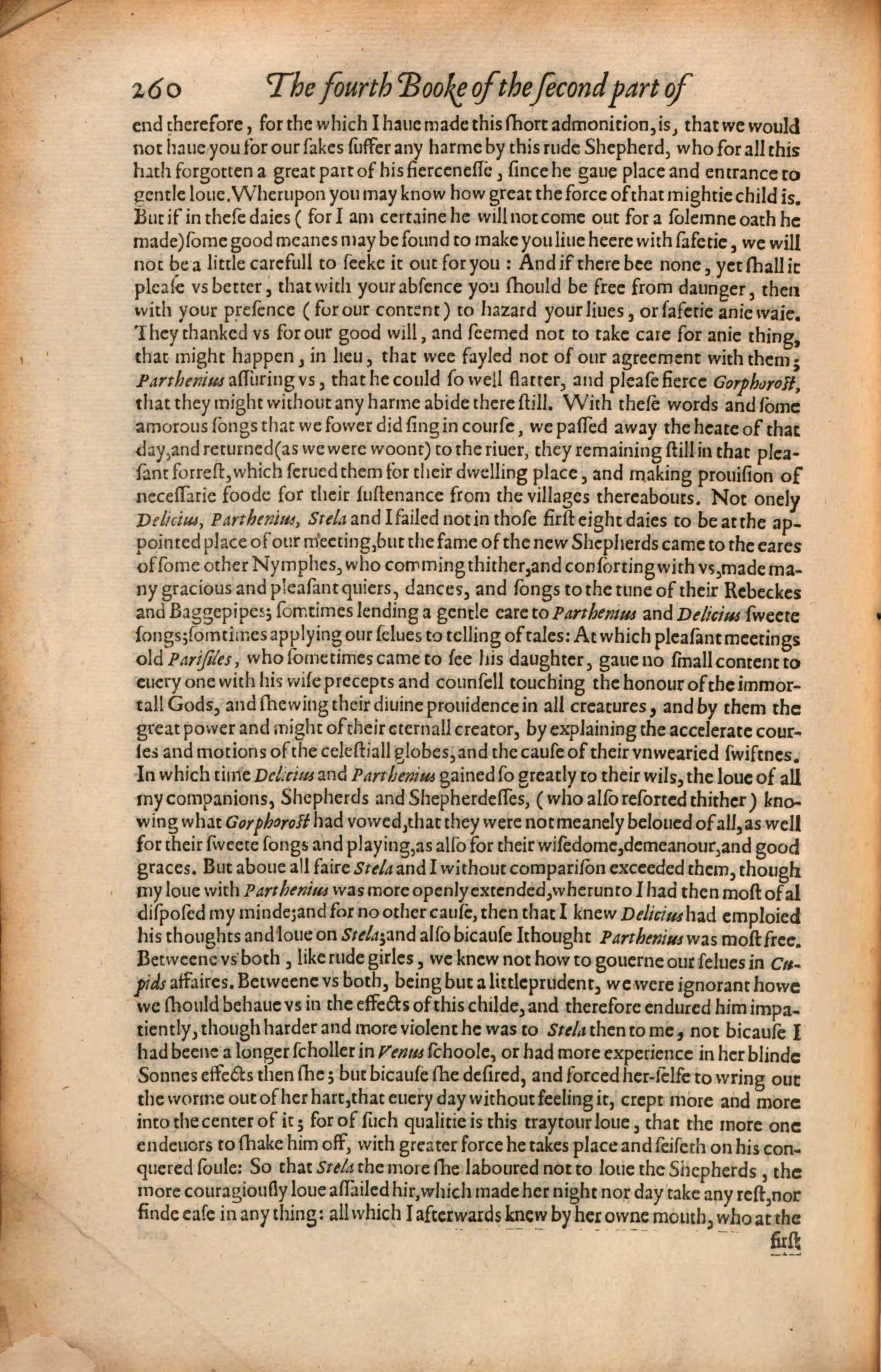 end therefore, for the which I haue made this short admonition, is, that we would not haue you for our sakes suffer any harme by this rude Shepherd, who for all this hath forgotten a great part of his fiercenesse, since he gaue place and entrance to gentle loue. Wherupon you may know how great the force of that mightie child is. But if in these daies (for I am certaine he will not come out for a solemne oath he made) some good meanes may be found to make you liue heere with safetie, we will not be a little carefull to seeke it out for you: And if there bee none, yet shall it please vs better, that with your absence you should be free from daunger, then with your presence (for our content) to hazard your liues, or safetie anie waie. They thanked vs for our good will, and seemed not to take care for anie thing, that might happen, in lieu, that wee fayled not of our agreement with them; Parthenius assuring vs, that he could so well flatter, and please fierce Gorphorost, that they might without any harme abide there still. With these words and some amorous songs that we fower did sing in course, we passed away the heate of that day, and returned (as we were woont) to the riuer, they remaining still in that pleaâˆ£sant forrest, which serued them for their dwelling place, and making prouision of necessarie foode for their sustenance from the villages thereabouts. Not onely Delicius, Parthenius, Stela and I failed not in those first eight daies to be at the apâˆ£pointed place of our meeting, but the fame of the new Shepherds came to the eares of some other Nymphes, who comming thither, and consorting with vs, made maâˆ£ny gracious and pleasant quiers, dances, and songs to the tune of their Rebeckes and Baggepipes; somtimes lending a gentle eare to Parthenius and Delicius sweete songs; somtimes applying our selues to telling of tales: At which pleasant meetings old Parisies, who sometimes came to see his daughter, gaue no small content to euery one with his wise precepts and counsell touching the honour of the immorâˆ£tall Gods, and shewing their diuine prouidence in all creatures, and by them the great power and might of their eternall creator, by explaining the accelerate courâˆ£ses and motions of the celestiall globes, and the cause of their vnwearied swiftnes. In which time Delicius and Parthenius gained so greatly to their wils, the loue of all my companions, Shepherds and Shepherdesses, (who also resorted thither) knoâˆ£wing what Gorphorost had vowed, that they were not meanely beloued of all, as well for their sweete songs and playing, as also for their wisedome, demeanour, and good graces. But aboue all faire Stela and I without comparison exceeded them, though my loue with Parthenius was more openly extended, wherunto I had then most of al disposed my minde; and for no other cause, then that I knew Delicius had emploied his thoughts and loue on Stela; and also bicause Ithought Parthenius was most free. Betweene vs both, like rude girles, we knew not how to gouerne our selues in Cuâˆ£pids affaires. Betweene vs both, being but a littleprudent, we were ignorant howe we should behaue vs in the effects of this childe, and therefore endured him impaâˆ£tiently, though harder and more violent he was to Stela then to me, not bicause I had beene a longer scholler in Venus schoole, or had more experience in her blinde Sonnes effects then she; but bicause she desired, and forced her-selfe to wring out the worme out of her hart, that euery day without feeling it, crept more and more into the center of it; for of such qualitie is this traytour loue, that the more one endeuors to shake him off, with greater force he takes place and seiseth on his conâˆ£quered soule: So that Stela the more she laboured not to loue the Shepherds, the more couragiously loue assailed hir, which made her night nor day take any rest, nor finde ease in any thing: all which I afterwards knew by her owne mouth, who at the