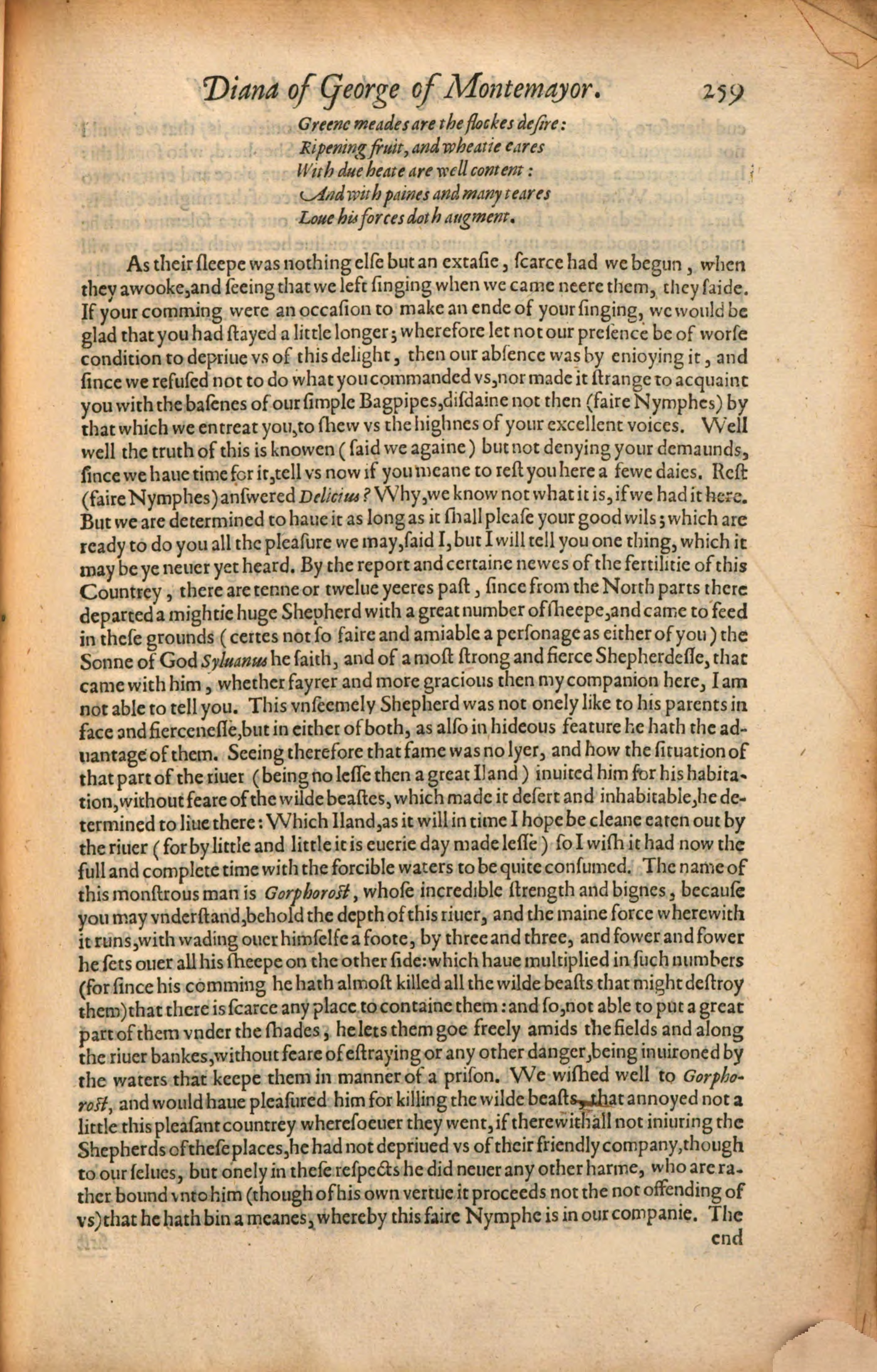 Greene meades are the flockes desire:
Ripening fruit, and wheatie eares
With due heate are well content:
And with paines and many teares

As their sleepe was nothing else but an extasie, scarce had we begun, when they awooke, and seeing that we left singing when we came neere them, they saide. If your comming were an occasion to make an ende of your singing, we would be glad that you had stayed a little longer; wherefore let not our presence be of worse condition to depriue vs of this delight, then our absence was by enioying it, and since we refused not to do what you commanded vs, nor made it strange to acquaint you with the basenes of our simple Bagpipes, disdaine not then (faire Nymphes) by that which we entreat you, to shew vs the highnes of your excellent voices. Well well the truth of this is knowen (said we againe) but not denying your demaunds, since we haue time for it, tell vs now if you meane to rest you here a fewe daies. Rest (faire Nymphes) answered Delicius? Why, we know not what it is, if we had it here. But we are determined to haue it as long as it shall please your good wils; which are ready to do you all the pleasure we may, said I, but I will tell you one thing, which it may be ye neuer yet heard. By the report and certaine newes of the fertilitie of this Countrey, there are tenne or twelue yeeres past, since from the North parts there departed a mightie huge Shepherd with a great number of sheepe, and came to feed in these grounds (certes not so faire and amiable a personage as either of you) the Sonne of God Syluanus he saith, and of a most strong and fierce Shepherdesse, that came with him, whether fayrer and more gracious then my companion here, I am not able to tell you. This vnseemely Shepherd was not onely like to his parents in face and fiercenesse, but in either of both, as also in hideous feature he hath the adâˆ£uantage of them. Seeing therefore that fame was no lyer, and how the situation of that part of the riuer (being no lesse then a great I land) inuited him for his habitaâˆ£tion, without feare of the wilde beastes, which made it desert and inhabitable, he deâˆ£termined to liue there: Which I land, as it will in time I hope be cleane eaten out by the riuer (for by little and little it is euerie day made lesse) so I wish it had now the full and complete time with the forcible waters to be quite consumed. The name of this monstrous man is Gorphorost, whose incredible strength and bignes, because you may vnderstand, behold the depth of this riuer, and the maine force wherewith it runs, with wading ouer himselfe a foote, by three and three, and fower and fower he sets ouer all his sheepe on the other side: which haue multiplied in such numbers (for since his comming he hath almost killed all the wilde beasts that might destroy them) that there is scarce any place to containe them: and so, not able to put a great part of them vnder the shades, he lets them goe freely amids the fields and along the riuer bankes, without feare of estraying or any other danger, being inuironed by the waters that keepe them in manner of a prison. We wished well to Gorphoâˆ£rost, and would haue pleasured him for killing the wilde beasts, that annoyed not a little this pleasant countrey wherefoeuer they went, if there with all not iniuring the Shepherds of these places, he had not depriued vs of their friendly company, though to our selues, but onely in these respects he did neuer any other harme, who are raâˆ£ther bound vnto him (though of his own vertue it proceeds not the not offending of vs) that he hath bin a meanes, whereby this faire Nymphe is in our companie. The