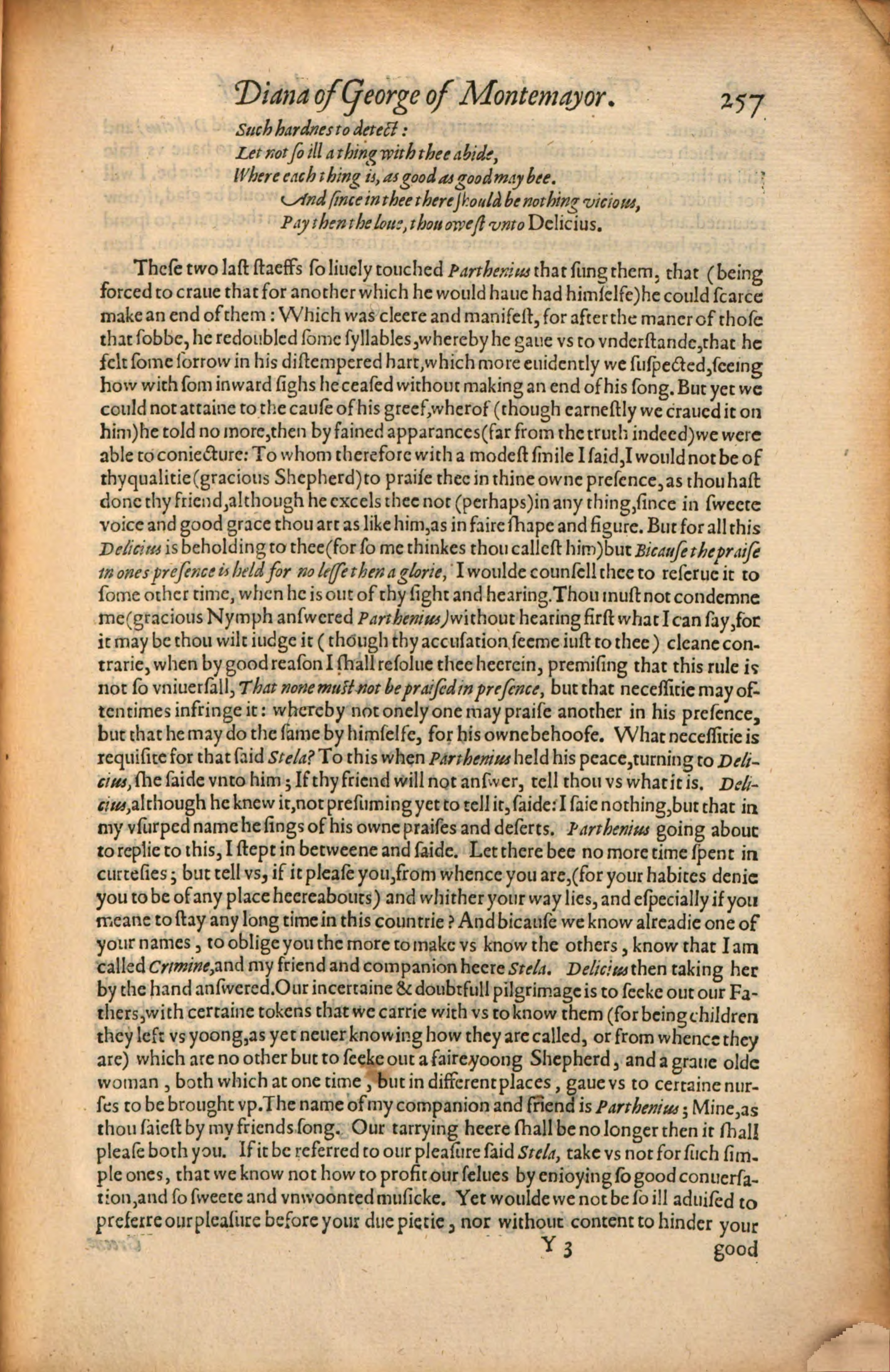 Such hardnes to detect:
Let not so ill a thing with thee abide,
Where each thing is, as good as good may bee.
And since in thee there should be not hing vicious,

Pay then the loue, thou owest vnto Delicius.

These two last staeffs so liuely touched Parthenius that sung them, that (being forced to craue that for another which he would haue had himselfe) he could scarce make an end of them: Which was cleere and manifest, for after the maner of those that sobbe, he redoubled some syllables, whereby he gaue vs to vnderstande, that he felt some sorrow in his distempered hart, which more euidently we suspected, seeing how with som inward sighs he ceased without making an end of his song. But yet we could not attaine to the cause of his greef, wherof (though earnestly we craued it on him) he told no more, then by fained apparances (far from the truth indeed) we were able to coniecture: To whom therefore with a modest smile I said, I would not be of thyqualitie (gracious Shepherd) to praise thee in thine owne presence, as thou hast done thy friend, although he excels thee not (perhaps) in any thing, since in sweete voice and good grace thou art as like him, as in faire shape and figure. But for all this Delicius is beholding to thee (for so me thinkes thou callest him) but Bicause the praise in ones presence is held for no lesse then a gloze, I woulde counsell thee to reserue it to some other time, when he is out of thy sight and hearing. Thou must not condemne me (gracious Nymph answered Parthenius) without hearing first what I can say, for it may be thou wilt iudge it (though thy accusation seeme iust to thee) cleane conâˆ£trarie, when by good reason I shall resolue thee heerein, premising that this rule is not so vniuerfall, That none must not be praised in presence, but that necessitie may ofâˆ£tentimes infringe it: whereby not onely one may praise another in his presence, but that he may do the same by himselfe, for his owne behoofe. What necessitie is requisite for that said Stela? To this when Parthenius held his peace, turning to Deliâˆ£cius, she saide vnto him; If thy friend will not answer, tell thou vs what it is. Deliâˆ£cius, although he knew it, not presuming yet to tell it, saide: I saie nothing, but that in my vsurped name he sings of his owne praises and deserts. Parthenius going about to replie to this, I stept in betweene and saide. Let there bee no more time spent in curtesies; but tell vs, if it please you, from whence you are, (for your habites denie you to be of any place heereabouts) and whither your way lies, and especially if you meane to stay any long time in this countrie? And bicause we know alreadie one of your names, to oblige you the more to make vs know the others, know that I am called Crimine, and my friend and companion heere Stela. Delicius then taking her by the hand answered. Our incertaine & doubtfull pilgrimage is to seeke out our Faâˆ£thers, with certaine tokens that we carrie with vs to know them (for being children they left vs yoong, as yet neuer knowing how they are called, or from whence they are) which are no other but to seeke out a faire yoong Shepherd, and a graue olde woman, both which at one time, but in different places, gaue vs to certaine nurâˆ£ses to be brought vp. The name of my companion and friend is Parthenius; Mine, as thou saiest by my friends song. Our tarrying heere shall be no longer then it shall please both you. If it be referred to our pleasure said Stela, take vs not for such simâˆ£ple ones, that we know not how to profit our selues by enioying so good conuersaâˆ£tion, and so sweete and vnwoonted musicke. Yet woulde we not be so ill aduised to preferre our pleasure before your due pietie, nor without content to hinder your