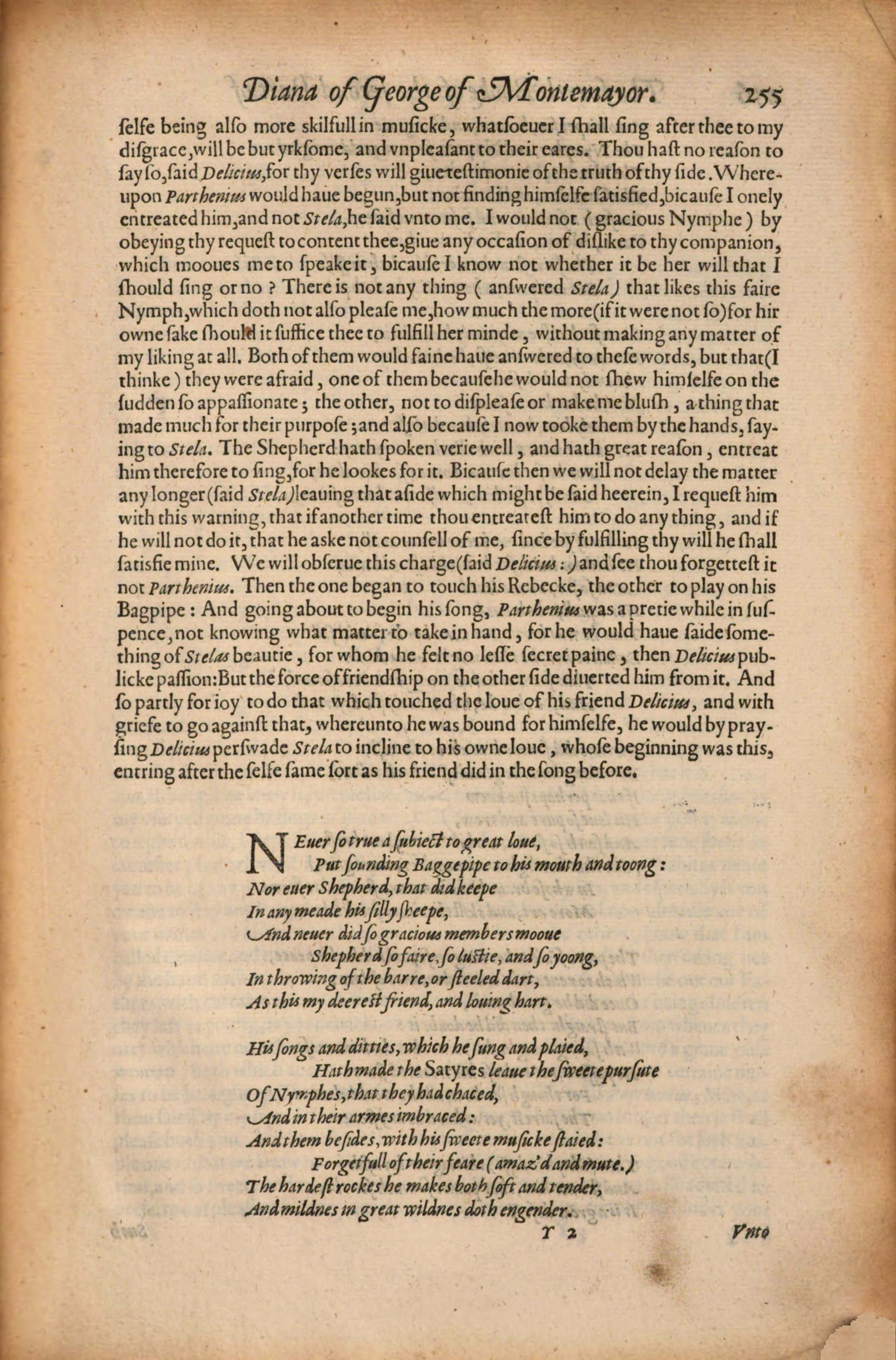 selfe being also more skilfull in musicke, whatsoeuer I shall sing after thee to my disgrace, will be but yrksome, and vnpleasant to their eares. Thou hast no reason to say so, said Delicius, for thy verses will giue testimonie of the truth of thy side. Whereâˆ£upon Parthenius would haue begun, but not finding himselfe satisfied, bicause I onely entreated him, and not Stela, he said vnto me. I would not (gracious Nymphe) by obeying thy request to content thee, giue any occasion of dislike to thy companion, which mooues me to speake it, bicause I know not whether it be her will that I should sing or no? There is not any thing (answered Stela) that likes this faire Nymph, which doth not also please me, how much the more (if it were not so) for hir owne sake should it suffice thee to fulfill her minde, without making any matter of my liking at all. Both of them would faine haue answered to these words, but that (I thinke) they were afraid, one of them because he would not shew himselfe on the sudden so appassionate; the other, not to displease or make me blush, a thing that made much for their purpose; and also because I now tooke them by the hands, sayâˆ£ing to Stela. The Shepherd hath spoken verie well, and hath great reason, entreat him therefore to sing, for he lookes for it. Bicause then we will not delay the matter any longer (said Stela) leauing that aside which might be said heerein, I request him with this warning, that if another time thou entreatest him to do any thing, and if he will not do it, that he aske not counsell of me, since by fulfilling thy will he shall satisfie mine. We will obserue this charge (said Delicius:) and see thou forgettest it not Parthenius. Then the one began to touch his Rebecke, the other to play on his Bagpipe: And going about to begin his song, Parthenius was a pretie while in susâˆ£pence, not knowing what matter to take in hand, for he would haue saide someâˆ£thing of Stelas beautie, for whom he felt no lesse secret paine, then Delicius pubâˆ£licke passion: But the force of friendship on the other side diuerted him from it. And so partly for ioy to do that which touched the loue of his friend Delicius, and with griefe to go against that, whereunto he was bound for himselfe, he would by prayâˆ£sing Delicius perswade Stela to incline to his owne loue, whose beginning was this, entring after the selfe same sort as his friend did in the song before.

NEuer so true a subiect to great loue,
Put sounding Baggepipe to his mouth and toong:
Nor euer Shepherd, that did keepe
In any meade his silly sheepe,
And neuer did so gracious members mooue
Shepherd so faire, so lustie, and so yoong,
In throwing of the barre, or steeled dart,
As this my deerest friend, and louing hart.
His songs and ditties, which he sung and plaied,
Hath made the Satyres leaue the sweete pursute
Of Nymphes, that they had chaced,
And in their armes imbraced:
And them besides, with his sweete musicke staied:
Forgetfull of their feare (amaz’d and mute.)
The hardest rockes he makes both soft and tender,
And mildnes in great wildnes doth engender.