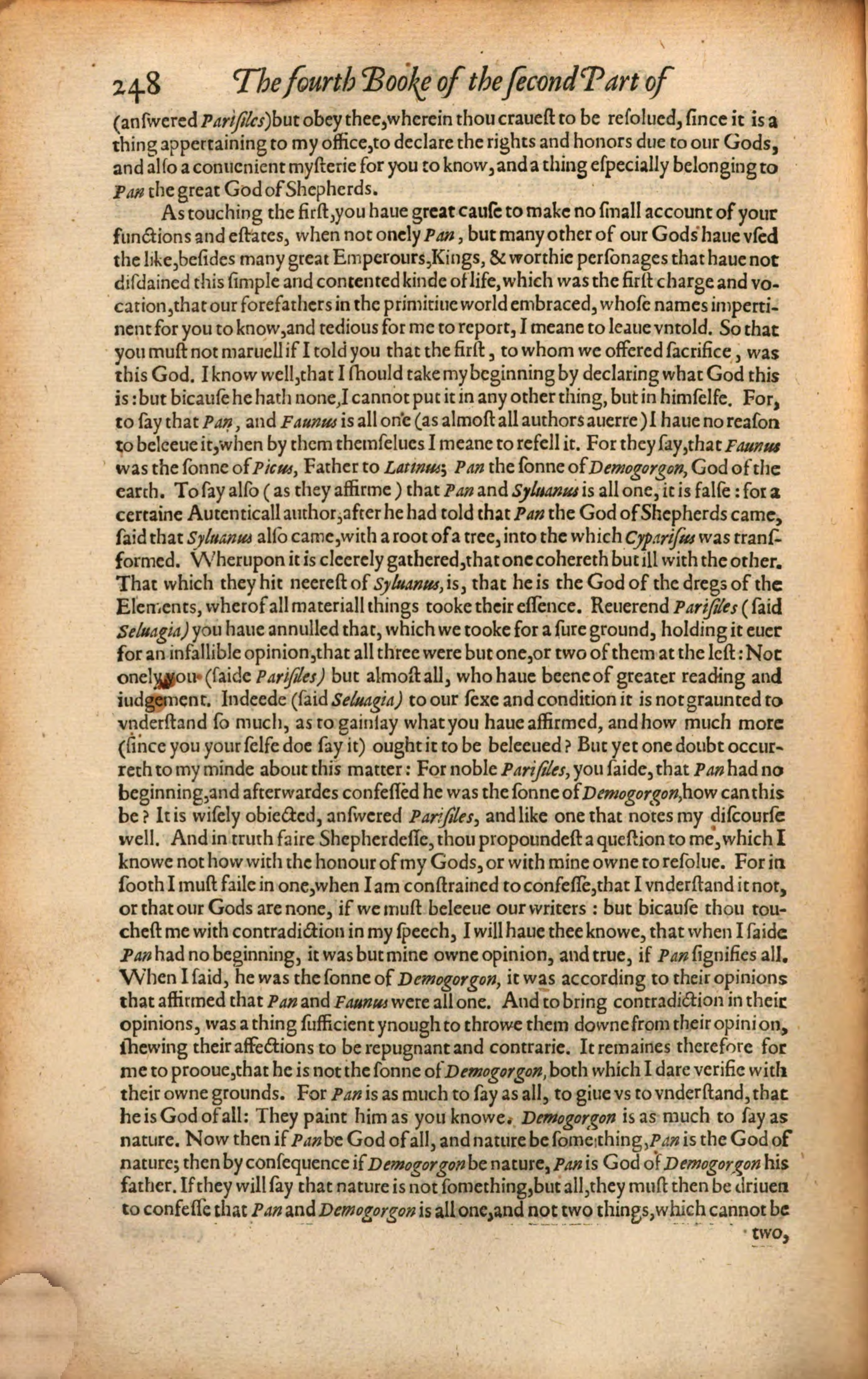 (answered Parisiles) but obey thee, wherein thou crauest to be resolued, since it is a thing appertaining to my office, to declare the rights and honors due to our Gods, and also a conuenient mysterie for you to know, and a thing especially belonging to Pan the great God of Shepherds.
As touching the first, you haue great cause to make no small account of your functions and estates, when not onely Pan, but many other of our Gods haue vsed the like, besides many great Emperours, Kings, & worthie personages that haue not disdained this simple and contented kinde of life, which was the first charge and voâˆ£cation, that our forefathers in the primitiue world embraced, whose names impertiâˆ£nent for you to know, and tedious for me to report, I meane to leaue vntold. So that you must not maruell if I told you that the first, to whom we offered sacrifice, was this God. I know well, that I should take my beginning by declaring what God this is: but bicause he hath none, I cannot put it in any other thing, but in himselfe. For, to say that Pan, and Faunus is all one (as almost all authors auerre) I haue no reason to beleeue it, when by them themselues I meane to refell it. For they say, that Faunus was the sonne of Picus, Father to Latinus; Pan the sonne of Demogorgon, God of the earth. To say also (as they affirme) that Pan and Syluanus is all one, it is false: for a certaine Autenticall author, after he had told that Pan the God of Shepherds came, said that Syluanus also came, with a root of a tree, into the which Cyparisus was transâˆ£formed. Whereupon it is cleerely gathered, that one cohereth but ill with the other. That which they hit neerest of Syluanus, is, that he is the God of the dregs of the Elements, wherof all materiall things tooke their essence. Reuerend Parisiles (said Seluagia) you haue annulled that, which we tooke for a sure ground, holding it euer for an infallible opinion, that all three were but one, or two of them at the lest: Not onely you (saide Parisiles) but almost all, who haue beene of greater reading and indgement. Indeede (said Seluagia) to our sexe and condition it is not graunted to vnderstand so much, as to gainsay what you haue affirmed, and how much more (since you your selfe doe say it) ought it to be beleeued? But yet one doubt occurâˆ£reth to my minde about this matter: For noble Parisiles, you saide, that Pan had no beginning, and afterwardes confessed he was the sonne of Demogorgon, how can this be? It is wisely obiected, answered Parisiles, and like one that notes my discourse well. And in truth faire Shepherdesse, thou propoundest a question to me, which I knowe not how with the honour of my Gods, or with mine owne to resolue. For in sooth I must faile in one, when I am constrained to confesse, that I vnderstand it not, or that our Gods are none, if we must beleeue our writers: but bicause thou touâˆ£chest me with contradiction in my speech, I will haue thee knowe, that when I saide Pan had no beginning, it was but mine owne opinion, and true, if Pan signifies all. When I said, he was the sonne of Demogorgon, it was according to their opinions that affirmed that Pan and Faunus were all one. And to bring contradiction in their opinions, was a thing sufficient ynough to throwe them downe from their opinion, shewing their affections to be repugnant and contrarie. It remaines therefore for me to prooue, that he is not the sonne of Demogorgon, both which I dare verifie with their owne grounds. For Pan is as much to say as all, to giue vs to vnderstand, that he is God of all: They paint him as you knowe.Demogorgon is as much to say as nature. Now then if Pan be God of all, and nature be something, Pan is the God of nature; then by consequence if Demogorgon be nature, Pan is God of Demogorgon his father. If they will say that nature is not something, but all, they must then be driuen to confesse that Pan and Demogorgon is all one, and not two things, which cannot be