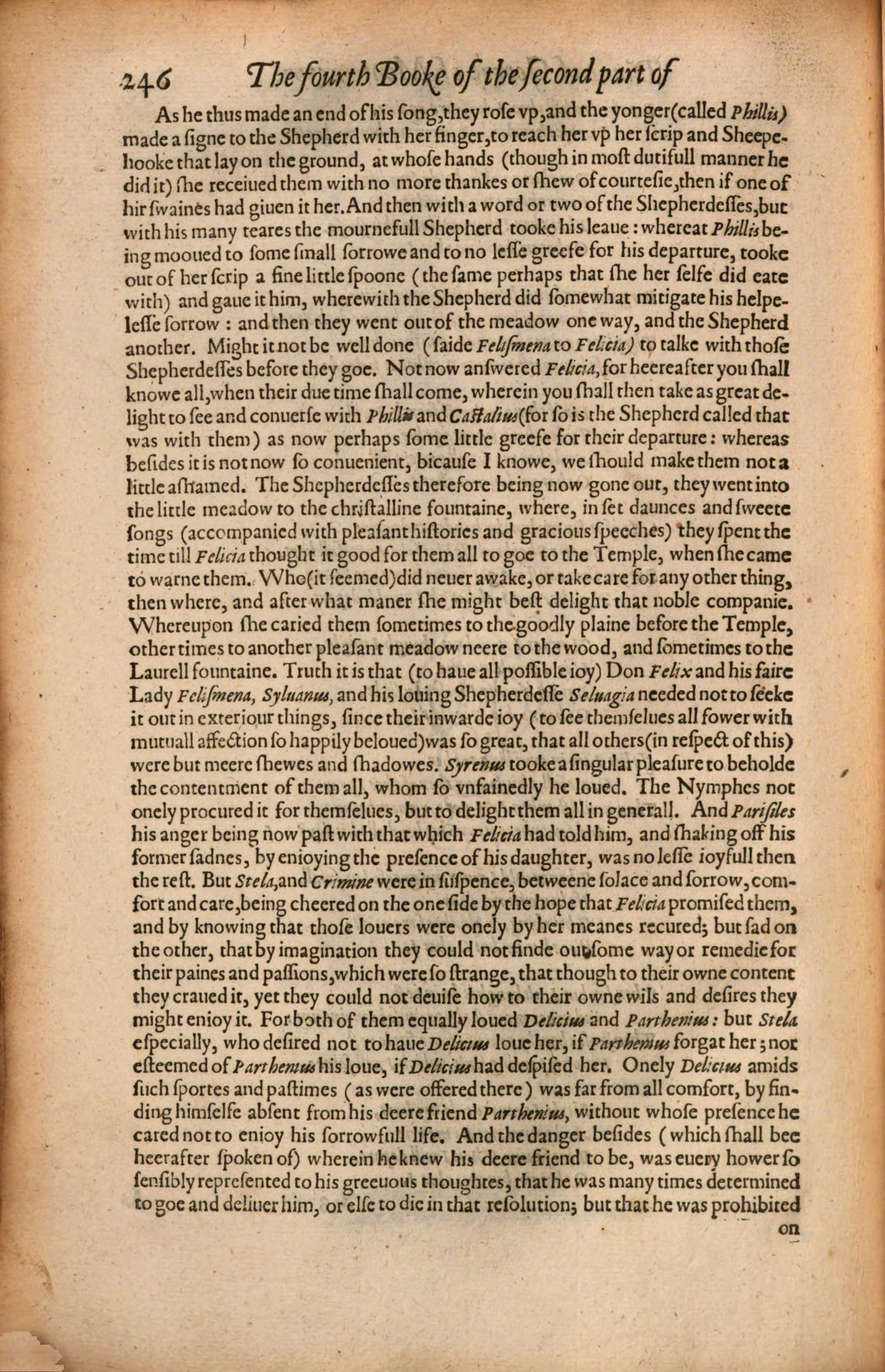 As he thus made an end of his song, they rose vp, and the yonger (called Phillis) made a signe to the Shepherd with her singer, to reach her vp her scrip and Sheepeâˆ£hooke that lay on the ground, at whose hands (though in most dutifull manner he did it) she receiued them with no more thankes or shew of courtesie, then if one of hir swaines had giuen it her. And then with a word or two of the Shepherdesses, but with his many teares the mournefull Shepherd tooke his leaue: whereat Phillis beâˆ£ing mooued to some small sorrowe and to no lesse greefe for his departure, tooke out of her scrip a fine little spoone (the same perhaps that she her selfe did eate with) and gaue it him, wherewith the Shepherd did somewhat mitigate his helpeâˆ£lesse sorrow: and then they went out of the meadow one way, and the Shepherd another, Might it not be well done (saide Felismena to Felicia) to talke with those Shepherdesses before they goe. Not now answered Felicia, for heereafter you shall knowe all, when their due time shall come, wherein you shall then take as great deâˆ£light to see and conuerse with Phillis and Castalius (for so is the Shepherd called that was with them) as now perhaps some little greefe for their departure: whereas besides it is not now so conuenient, bicause I knowe, we should make them not a little ashamed. The Shepherdesses therefore being now gone out, they went into the little meadow to the christalline fountaine, where, in set daunces and sweete songs (accompanied with pleasanthistories and gracious speeches) they spent the time till Felicia thought it good for them all to goe to the Temple, when she came to warne them. Who (it seemed) did neuer awake, or take care for any other thing, then where, and after what maner she might best delight that noble companie. Whereupon she caried them sometimes to the goodly plaine before the Temple, other times to another pleasant meadow neere to the wood, and sometimes to the Laurell fountaine. Truth it is that (to haue all possible ioy) Don Felix and his faire Lady Felismena, Syluanus, and his louing Shepherdesse Seluagia needed not to seeke it out in exteriour things, since their inwarde ioy (to see themselues all fower with mutuall affection so happily beloued) was so great, that all others (in respect of this) were but meere shewes and shadowes. Syrenus tooke a singular pleasure to beholde the contentment of them all, whom so vnfainedly he loued. The Nymphes not onely procured it for themselues, but to delight them all in generall. And Parisiles his anger being now past with that which Felicia had told him, and shaking off his former sadnes, by enioying the presence of his daughter, was no lesse ioyfull then the rest. But Stela, and Crimine were in suspence, betweene solace and sorrow, comâˆ£fort and care, being cheered on the one side by the hope that Felicia promised them, and by knowing that those louers were onely by her meanes recured; but sad on the other, that by imagination they could not finde out some way or remedie for their paines and passions, which were so strange, that though to their owne content they craued it, yet they could not deuise how to their owne wils and desires they might enioy it. For both of them equally loued Delicius and Parthenius: but Stela especially, who desired not to haue Delicius loue her, if Parthentus forgat her; nor esteemed of Parthemus his loue, if Delicius had despised her. Onely Delicius amids such sportes and pastimes (as were offered there) was far from all comfort, by finâˆ£ding himselfe absent from his deere friend Parthenius, without whose presence he cared not to enioy his sorrowfull life. And the danger besides (which shall bee heerafter spoken of) wherein he knew his deere friend to be, was euery hower so sensibly represented to his greeuous thoughtes, that he was many times determined to goe and deliuer him, or else to die in that resolution; but that he was prohibited