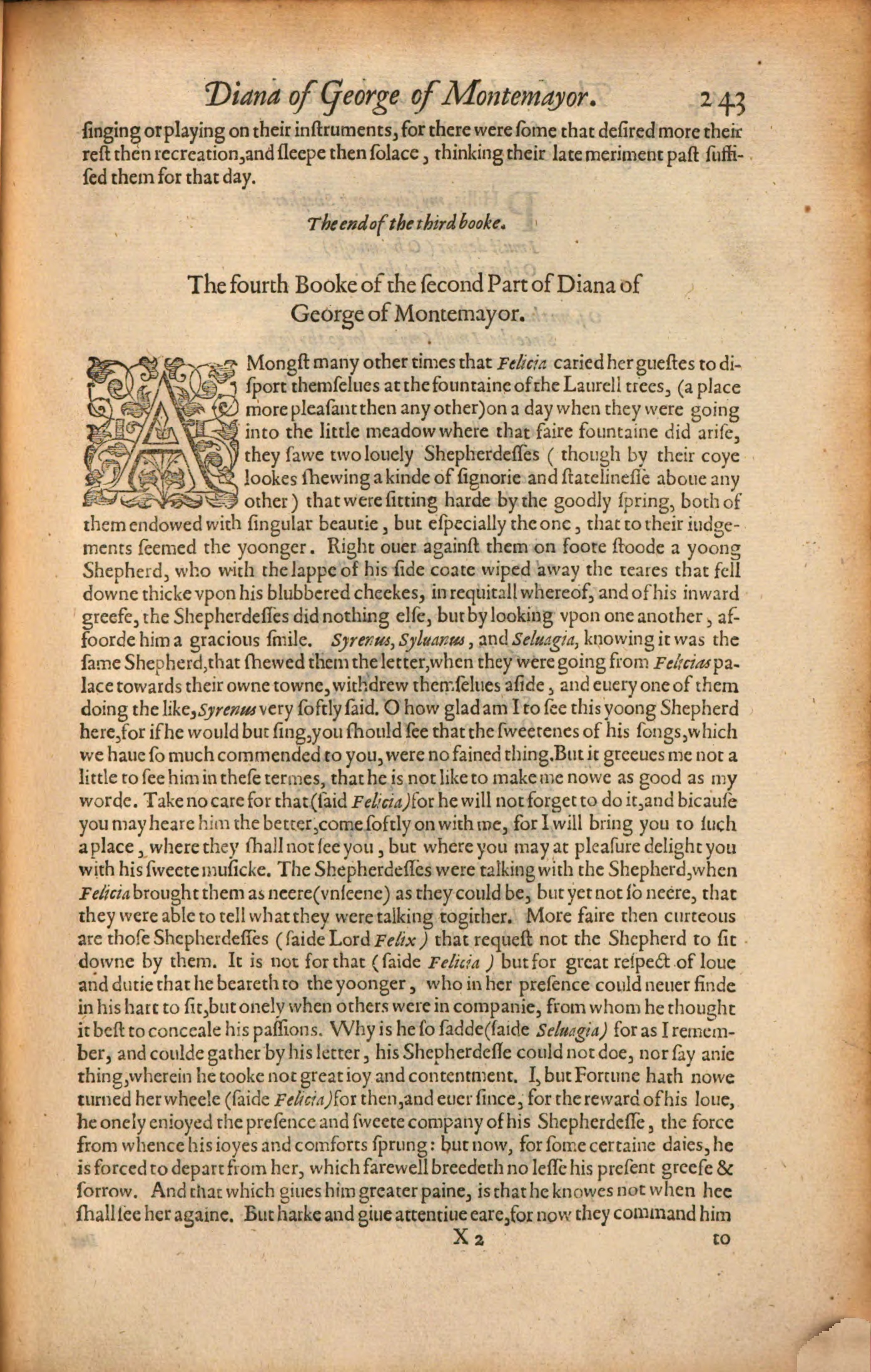 singing or playing on their instruments, for there were some that desired more their rest then recreation, and sleepe then solace, thinking their late meriment past suffiâˆ£sed them for that day.

The end of the third booke.

The fourth Booke of the second Part of Diana of George of Montemayor.

AMongst many other times that Felicia caried her guestes to diâˆ£sport themselues at the fountaine of the Laurell trees, (a place more pleasant then any other) on a day when they were going into the little meadow where that faire fountaine did arise, they sawe two louely Shepherdesses (though by their coye lookes shewing a kinde of signorie and statelinesse aboue any other) that were sitting harde by the goodly spring, both of them endowed with singular beautie, but especially the one, that to their iudgeâˆ£ments seemed the yoonger. Right ouer against them on foote stoode a yoong Shepherd, who with the lappe of his side coate wiped away the teares that fell downe thicke vpon his blubbered cheekes, in requitall whereof, and of his inward greefe, the Shepherdesses did nothing else, but by looking vpon one another, afâˆ£foorde him a gracious smile.Syrenus, Syluanus, and Seluagia, knowing it was the same Shepherd, that shewed them the letter, when they were going from Felicias paâˆ£lace towards their owne towne, withdrew themselues aside, and euery one of them doing the like, Syrenus very softly said. O how glad am I to see this yoong Shepherd here, for if he would but sing, you should see that the sweetenes of his songs, which we haue so much commended to you, were no fained thing. But it greeues me not a little to see him in these termes, that he is not like to make me nowe as good as my worde. Take no care for that (said Felicia) for he will not forget to do it, and bicause you may heare him the better, come softly on with me, for I will bring you to such a place, where they shall not see you, but where you may at pleasure delight you with his sweete musicke. The Shepherdesses were talking with the Shepherd, when Felicia brought them as neere (vnseene) as they could be, but yet not so neere, that they were able to tell what they were talking togither. More faire then curteous are those Shepherdesses (saide Lord Felix) that request not the Shepherd to sit downe by them. It is not for that (saide Felicia) but for great respect of loue and dutie that he beareth to the yoonger, who in her presence could neuer finde in his hart to sit, but onely when others were in companie, from whom he thought it best to conceale his passions. Why is he so sadde (saide Seluagia) for as I rememâˆ£ber, and coulde gather by his letter, his Shepherdesse could not doe, nor say anie thing, wherein he tooke not great ioy and contentment. I, but Fortune hath nowe turned her wheele (saide Felicia) for then, and euer since, for the reward of his loue, he onely enioyed the presence and sweete company of his Shepherdesse, the force from whence his ioyes and comforts sprung: but now, for some certaine daies, he is forced to depart from her, which farewell breedeth no lesse his present greese & sorrow. And that which giues him greater paine, is that he knowes not when hee shall see her againe. But harke and giue attentiue care, for now they command him