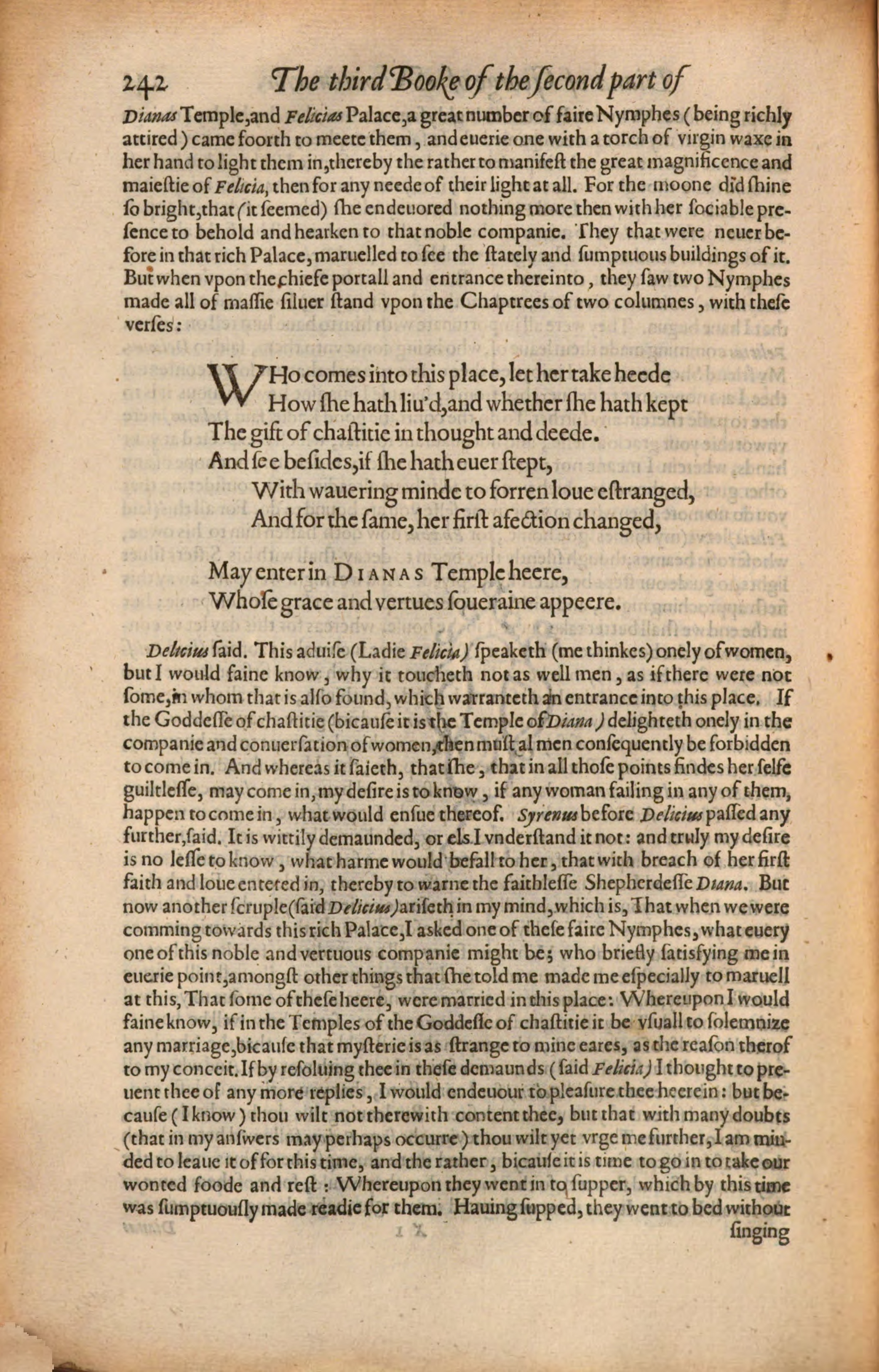 Dianas Temple, and Felicias Palace, a great number of faire Nymphes (being richly attired) came foorth to meete them, and euerie one with a torch of virgin waxe in her hand to light them in, thereby the rather to manifest the great magnificence and maiestie of Felicia, then for any neede of their light at all. For the moone did shine so bright, that (it seemed) she endeuored nothing more then with her sociable preâˆ£sence to behold and hearken to that noble companie. They that were neuer beâˆ£fore in that rich Palace, maruelled to see the stately and sumptuous buildings of it. But when vpon the chiefe portall and entrance thereinto, they saw two Nymphes made all of massie siluer stand vpon the Chaptrees of two columnes, with these verses:

WHo comes into this place, let her take heede
How she hath liu’d, and whether she hath kept
The gift of chastitie in thought and deede.
And see besides, if she hath euer stept,
With wauering minde to forren loue estranged,
And for the same, her first afection changed,
May enter in DIANAS Temple heere,
Whose grace and vertues soueraine appeere.

Delicius said. This aduise (Ladie Felicia) speaketh (me thinkes) onely of women, but I would faine know, why it toucheth not as well men, as if there were not some, in whom that is also found, which warranteth an entrance into this place. If the Goddesse of chastitie (bicause it is the Temple of Diana) delighteth onely in the companie and conuersation of women, then must al men consequently be forbidden to come in. And whereas it saieth, that she, that in all those points findes her selfe guiltlesse, may come in, my desire is to know, if any woman failing in any of them, happen to come in, what would ensue thereof. Syrenus before Delicius passed any further, said. It is wittily demaunded, or els I vnderstand it not: and truly my desire is no lesse to know, what harme would befall to her, that with breach of her first faith and loue entered in, thereby to warne the faithlesse Shepherdesse Diana. But now another scruple (said Delicius) ariseth in my mind, which is, That when we were comming towards this rich Palace, I asked one of these faire Nymphes, what euery one of this noble and vertuous companie might be; who briefly satisfying me in euerie point, amongst other things that she told me made me especially to maruell at this, That some of these heere, were married in this place: Whereupon I would faine know, if in the Temples of the Goddesse of chastitie it be vsuall to solemnize any marriage, bicause that mysterie is as strange to mine eares, as the reason therof to my conceit. If by resoluing thee in these demaunds (said Felicia) I thought to preâˆ£uent thee of any more replies, I would endeuour to pleasure thee heerein: but beâˆ£cause (I know) thou wilt not therewith content thee, but that with many doubts (that in my answers may perhaps occurre) thou wilt yet vrge me further, I am minâˆ£ded to leaue it of for this time, and the rather, bicause it is time to go in to take our wonted foode and rest: Whereupon they went in to supper, which by this time was sumptuously made readie for them. Hauing supped, they went to bed without