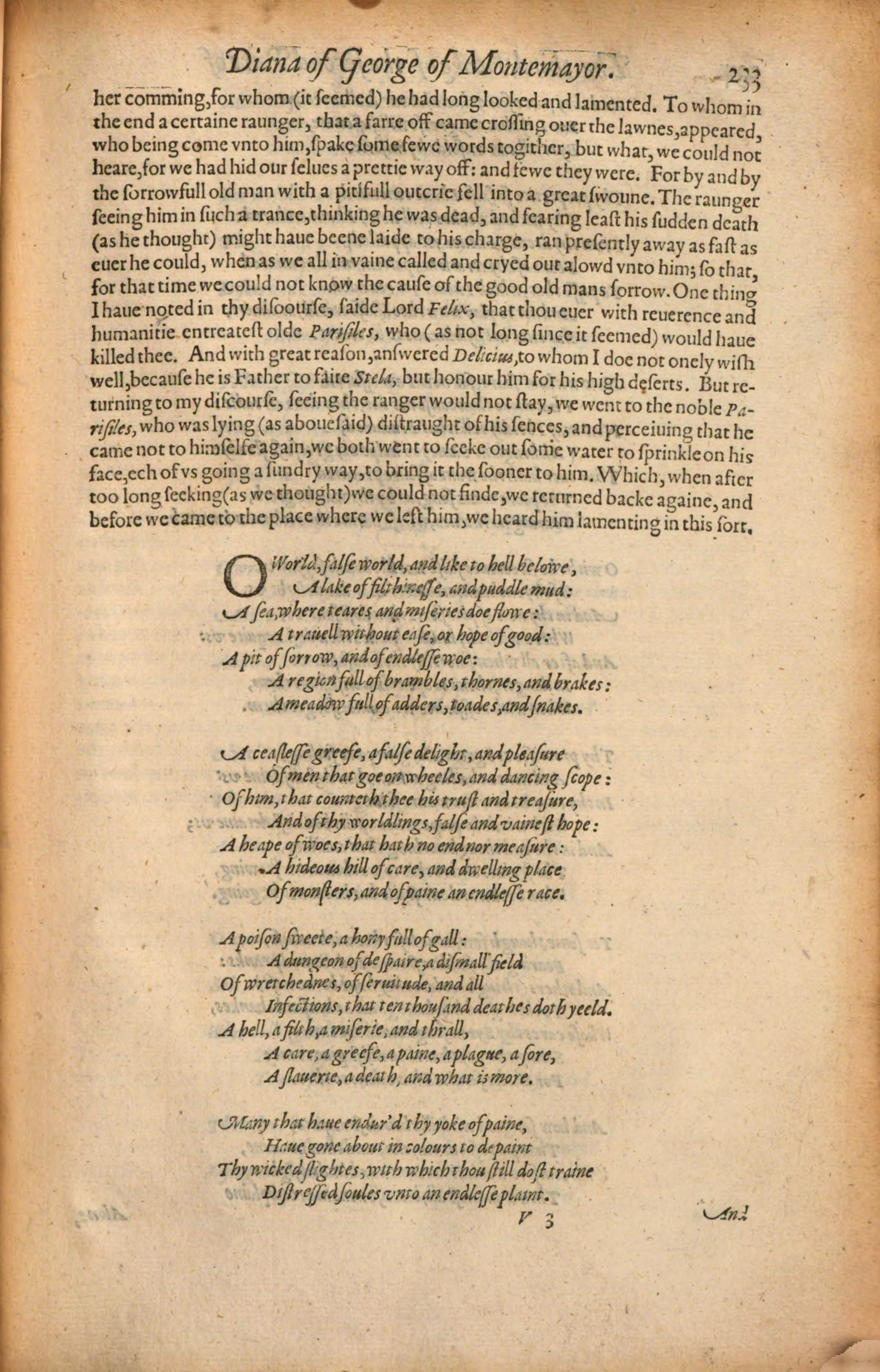 her comming, for whom (it seemed) he had long looked and lamented. To whom in the end a certaine raunger, that a farre off came crossing ouer the lawnes, appeared, who being come vnto him, spake some fewe words togither, but what, we could not heare, for we had hid our selues a prettie way off: and fewe they were. For by and by the sorrowfull old man with a pitifull outcrie fell into a great swoune. The raunger seeing him in such a trance, thinking he was dead, and fearing least his sudden death (as he thought) might haue beene laide to his charge, ran presently away as fast as euer he could, when as we all in vaine called and cryed out alowd vnto him; so that, for that time we could not know the cause of the good old mans sorrow. One thing I haue noted in thy disoourse, saide Lord Felix, that thou euer with reuerence and humanitie entreatest olde Parisiles, who (as not long since it seemed) would haue killed thee. And with great reason, answered Delicius, to whom I doe not onely wish well, because he is Father to faire Stela, but honour him for his high deserts. But reâˆ£turning to my discourse, seeing the ranger would not stay, we went to the noble Paâˆ£risiles, who was lying (as abouesaid) distraught of his sences, and perceiuing that he came not to himselfe again, we both went to seeke out some water to sprinkle on his face, ech of vs going a sundry way, to bring it the sooner to him. Which, when after too long seeking (as we thought) we could not finde, we returned backe againe, and before we came to the place where we left him, we heard him lamenting in this sort.

O World, false world, and like to hell belowe,
Alake of filt hinesse, and puddle mud:
A sea, where teares and miseries doe flowe:
A trauell without ease, or hope of good:
A pit of sorrow, and of endlesse woe:
A region full of brambles, thornes, and brakes:
Ameadow full of adders, toades, and snakes.
A ceaslesse greefe, afalse delight, and pleasure
Of men that goe on wheeles, and dancing scope:
Of him, that counteth thee his trust and treasure,
And of thy worldlings, false and vainest hope:
A heape of woes, that hath no end nor measure:
A hideous hill of care, and dwelling place
Of monsters, and of paine an endlesse race.
A poison sweete, a hony full of gall:
A dungeon of despaire, a dismall field
Of wretchednes, of seruitude, and all
Infections, that ten thousand deathes doth yeeld.
A hell, a filth, a miserie, and thrall,
A care, a greefe, a paine, a plague, a sore,
A slauerte, a death, and what is more.
Many that haue endur’d thy yoke of paine,
Haue gone about in colours to depaint
Thy wicked slightes, with which thou still dost traine
Distressed soules vnto an endlesse plaint.