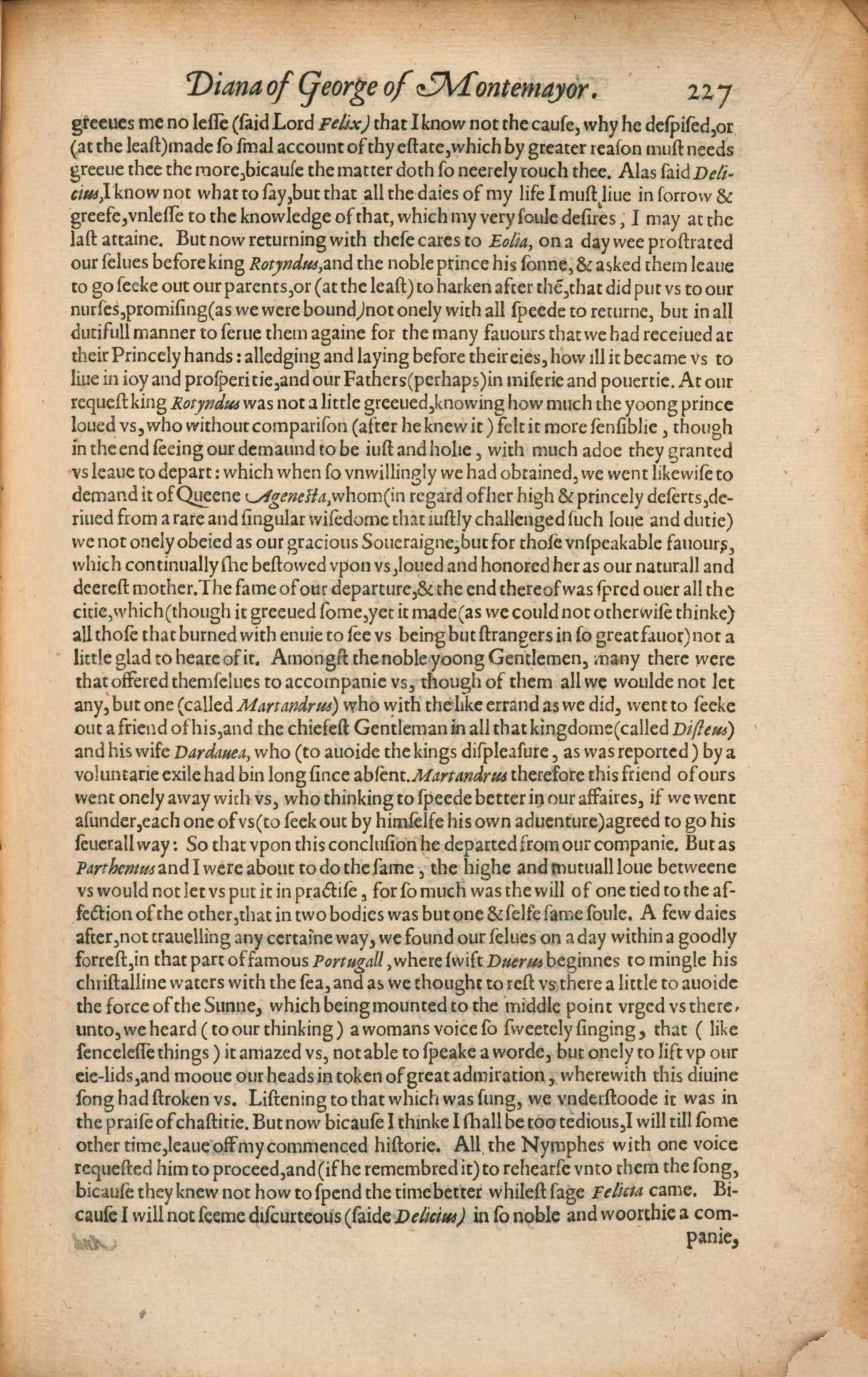 greeues me no lesse (said Lord Felix) that I know no the cause, why he despised, or (at the least) made so smal account of the estate, which by greater reason must needs greeue thee the more, bicause the matter doth so neerely touch thee. Alas said Delicius, I know not what to say, but that all the daies ofmy life I must liue in sorrow & greefe, vnlesse to the knowledge of that, which my very soule desires, I may at the last attaine. But now returning with these cares to Eolia, on a day wee prostrated our selues before king Rotyndus, and the noble prince his sonne, & asked them leaue to go seeke out our parents, or (at the least) to harken after the, that did put vs to our nurses, promising (as we were bound) not onely with all speede to returne, but in all dutifull manner to serue them againe for the many fauours that we had receiued at their Princely hands: alledging and laying before their eies, how ill it became vs to liue in joy and prosperitie, and our Fathers (perhaps) in miserie and pouertie. At our request king Rotyndus was not a little greeued, knowing how much the yoong prince loued vs, who without comparison (after he knew it) felt it more sensiblie, though in the end seeing our demaund to be just and holie, with much adoe they granted vs leaue to depart: which when so vnwillingly we had obtained, we went likewise to demand it of Queene Agenesta, whom (in regard of her high & princely deserts, deriued from a rare and singular wisedome that justly challenged such loue and dutie) we not onely obeied as our gracious Soueraigne, but for those vnspeakable fauours, which continually she bestowed vpon vs, loued and honored her as our naturall and deerest mother. The fame of our departure, & the end thereof was spred ouer all the citie, which (though it greeued some, yet it made (as we could not otherwise thinke) all those that burned with enuie to see vs being but strangers in so great fauor) not a little glad to heare of it. Amongst the noble yoong Gentlemen, many there were that offered themselues to accompanie vs, though of them all we woulde not let any, but one (called Martandrus) who with the like errand as we did, went to seeke out a friend of his, and the chiefest Gentleman in all that kingdome (called Disteus) and his wife Dardauea, who (to auoide the kings displeasure, as was reported) by a voluntarie exile had bin long since absent. Martandrus therefore this friend of ours went onely away with vs, who thinking to speede better in our affaires, if we went asunder, each on of vs (to seek out by himselfe his own aduenture) agreed to go his seuerall way: So that vpon this conclusion he departed from our companie. But as Parthentus and I were about to do the same, the highe and mutuall loue betweene vs would not let vs put it in practise, for so much was the will of one tied to the affection of the other, that in two bodies was but one & selfe same soule. A few daies after, not trauelling any certaine way, we found our selues on a day within a goodly forrest, in that part of famous Portugall, where swift Duerus beginnes to mingle his christalline waters with the sea, and as we thought to rest vs there a little to auoide the force of the Sunne, which being mounted to the middle point vrged vs there unto, we heard (to our thinking) a womans voice so sweetely singing, that (like sencelesse things) it amazed vs, not able to speake a worde, but onely to lift vp our eie-lids, and mooue our heads in token of great admiration, wherewith this diuine song had stroken vs. Liftening to that which was sung, we vnderstoode it was in the praise of chastitie. But now bicause I thinke I shall be too tedious, I will till some other time, leaue off my commenced historie. All the Nymphes with one voice requested him to proceed, and (if he remembred it) to rehearse vnto them the song, bicause they knew not how to spend the time better whilest sage Felicia came. Bicause I will not seeme discurteous (saide Delicius) in so noble and woorthie a companie