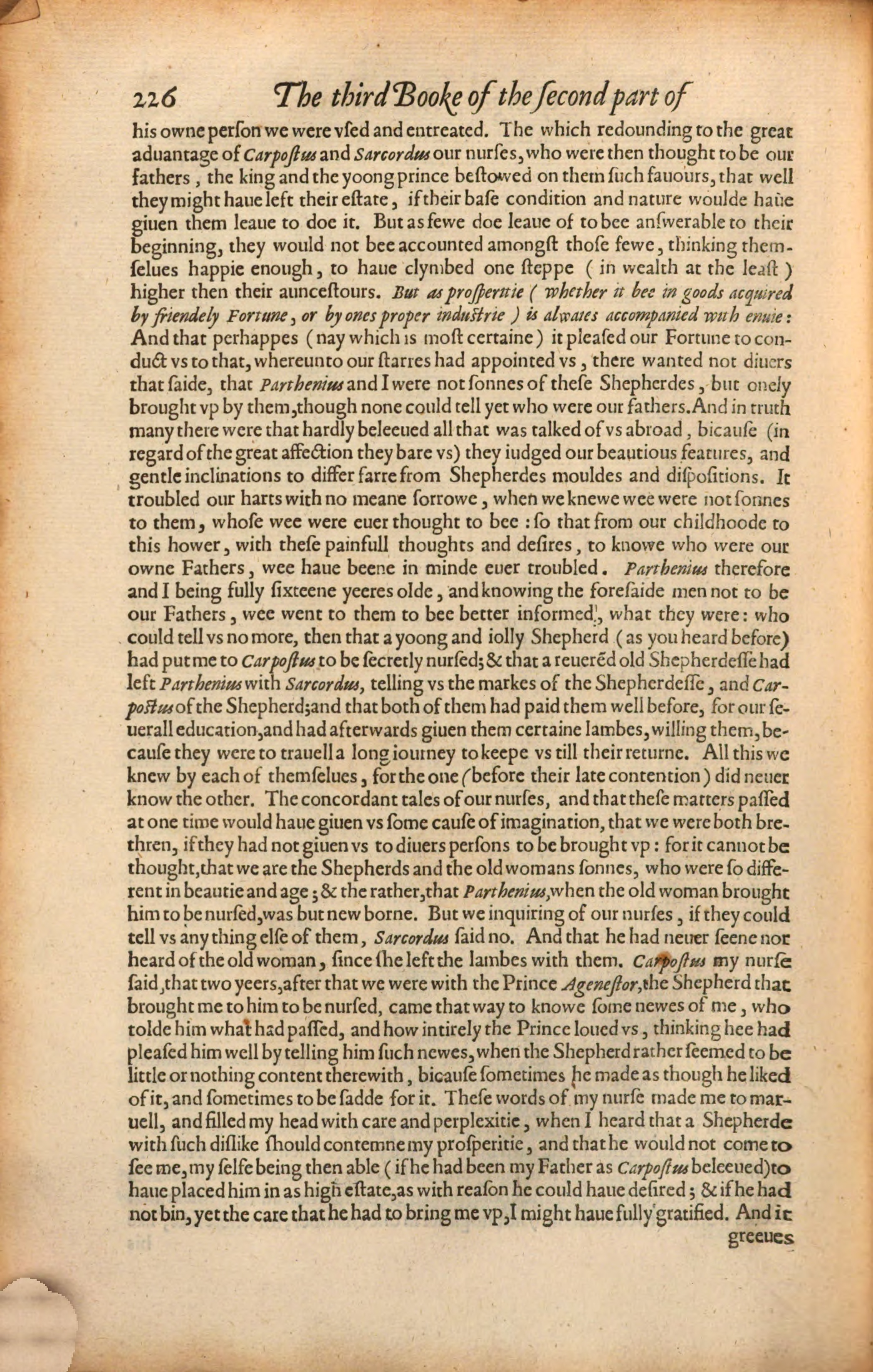 his owne person we were vsed and entreated. The which redounding to the great aduantage of Carpostus and Sarcordus our nurses, who were then thought to be our fathers, the king and the young prince bestowed on them fuch fauours, that well they might haue left their estate, if their base condition and nature woulde haue giuen them leaue to doe it. But as fewe doe leaue of to bee answerable to their beginning, they would not bee accounted amongst those fewe, thinking themselues happie enough, to haue clymbed one steppe (in wealth at the least) higher then their auncestours. But as prosperttie (whether it bee in goods acquired by friendely Fortune, or by ones proper industrie) is alwaes accompanied wtth enuie: And that perhappes (nay which is most certaine) it pleased our Fortune to conduct vs to that, whereunto our stares had appointed vs, there wanted not diuers that faide, that Parthenius and I were not sonnes of these Shepherdes, but onely brought vp by them, though none could tell yet who were our fathers. And in truth many there were that hardly beleeued all that was talked of vs abroad, bicause (in regard of the great affection they bare vs) they iudged our beautious features, and gentle inclinations to differ farre from Shepherdes mouldes and dispositions. It troubled our harts with no meane sorrowe, when we knewe wee were not sonnes to them, whose wee were euer thought to bee : so that from our childhoode to this hower, with these painfull thoughts and desires, to knowe who were our owne Fathers, wee haue beene in minde euer troubled. Parthenius therefore and I being fully sixteene yeeres olde, and knowing the foresaide men not to be our Fathers, wee went to them to bee better informed, what they were : who could tell vs no more, then that a yoong and jolly Sheperd (as you heard before) had put me to Carpostus to be secretly nursed; & that a reuered old Shepherdesse had left Parthenius with Sarcordus, telling vs the markes of the Shepherdesse, and Carpostus of the Shepherd; and that both of them had paid them well before, for our seuerall education, and had afterwards giuen them certaine lambes, willing them, because they were to trauell a long journey to keepe vs till their returne. All this we knew by each of themselues, for the one (before their late contention) did neuer know the other. The concordant tales of our nurses, and that these matters passed at one time would haue giuen vs some cause of imagination, that we were both brethren, if they had not giuen vs to diuers persons to be brought vp : for it cannot be thought, that we are the Shepherds and the old womans sonnes, who were so different in beautie and age; & the rather, that Parthenius, when the old woman brought him to be nursed, was but new borne. But we inquiring of our nurses, if they could tell vs anything else of them, Sarcordus said no. And that he had neuer seen nor heard of the old woman, since she left the lambes with them. Carpostus my nurse said, that two yeers, after that we were with the Prince Agenestor, the Shepherd that brought me to him to be nursed, came that way to knowe some newes of me, who tolde him what had passed, and how intirely the Prince loued vs, thinking hee had pleased him well by telling him such newes, when the Shepherd rather seemed to be little or nothing content therewith, bicause sometimes he made as though he liked of it, and sometimes to be sadde for it. These words of my nurse made me to maruell, and filled my head with care and perplexitie, when I heard that a Shepherde with such dislike should contemne my prosperitie, and that he would not come to see me, my selfe being then able (if he had been my Father as Carpostus beleeued) to haue placed him in as high estate, as with reason he could haue desired ;& if he had not bin, yet the care that he had to bring me vp, I might haue fully gratified. And it