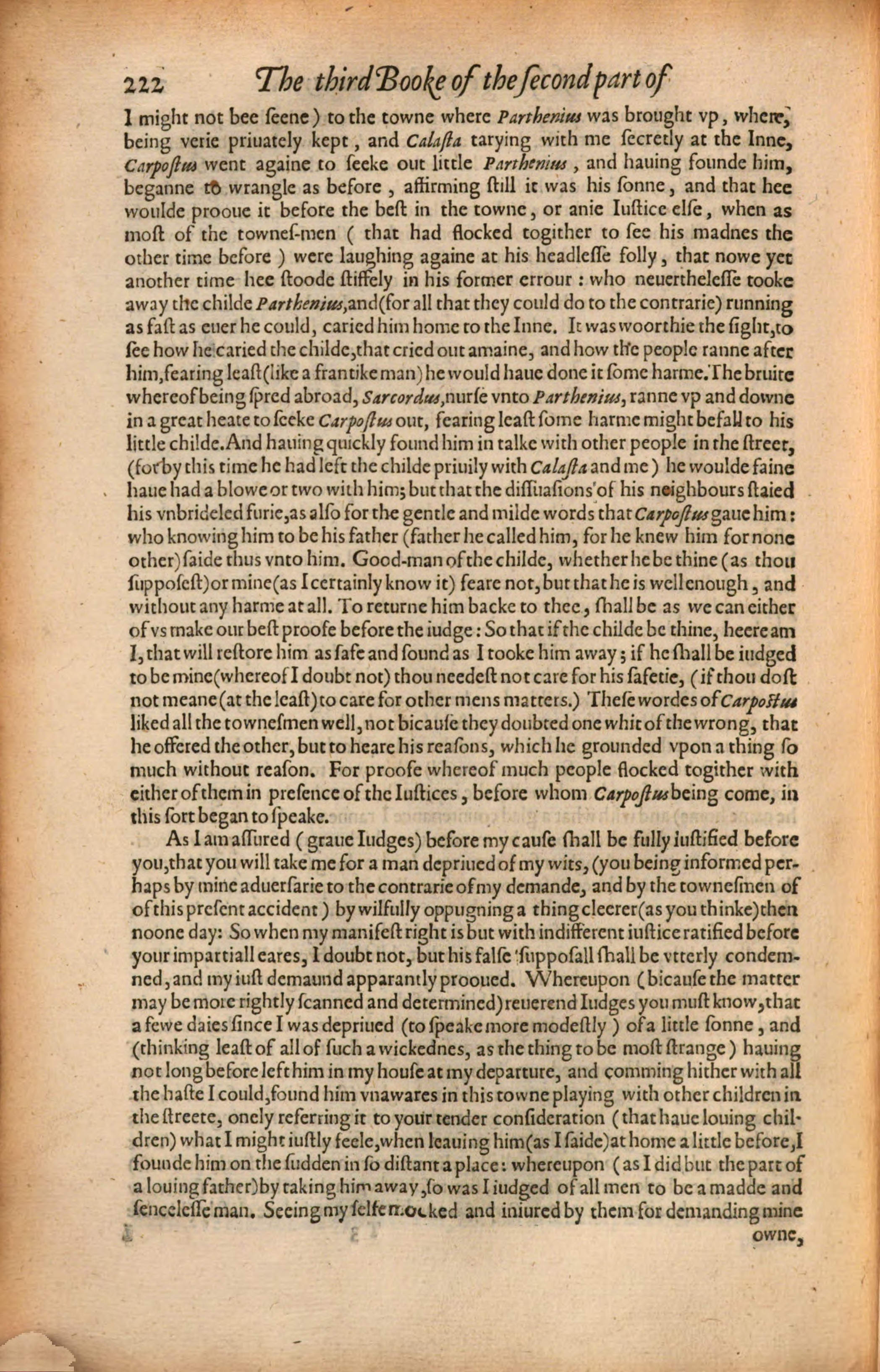 I might not beÃ© seene) to the towne where Parthenius was brought vp, where, being verie priuately kept, and Calasta tarying with me secretly at the Inne, Carpostus went againe to seeke out little Parthenius, and hauing founde him, beganne to wrangle as before, affirming still it was his sonne, and that hee woulde prooue it before the best in the towne, or anie Iustice else, when as most of the townes-men (that had flocked togither to see his madnes the other time before) were laughing againe at his headlesse folly, that nowe yet another time hee stoode stiffely in his former errour: who neuerthelesse tooke away the childe Parthenius, and (for all that they could do to the contrarie) running as fast as euer he could, caried him home to the Inne. It was woorthie the sight, to see how he caried the childe, that cried out amaine, and how the people ranne after him, fearing least (like a frantike man) he would haue done it some harme. The bruite whereof being spred abroad, Sarcordus, nurse vnto Parthenius, ranne vp and downe in a great heate to seeke Carpostus out, fearing least some harme might befall to his little childe. And hauing quickly found him in talke with other people in the street, (for by this time he had left the childe priuily with Calasta and me) he woulde faine haue had a blowe or two with him; but that the dissuasions of his neighbours staied his vnbrideled furie, as also for the gentle and milde words that Carpostus gaue him: who knowing him to be his father (father he called him, for he knew him for none other) saide thus vnto him. Good-man of the childe, whether he be thine (as thou supposest) or mine (as I certainly know it) feare not, but that he is well enough, and without any harme at all. To returne him backe to thee, shall be as we can either of vs make our best proofe before the iudge: So that if the childe be thine, heere am I, that will restore him as safe and sound as I tooke him away; if he shall be iudged to be mine (whereof I doubt not) thou needest not care for his safetie, (if thou dost not meane (at the least) to care for other mens matters.) These wordes of Carpostus liked all the townesmen well, not bicause they doubted one whit of the wrong, that he offered the other, but to heare his reasons, which he grounded vpon a thing so much without reason. For proofe whereof much people flocked togither with either of them in presence of the Iustices, before whom Carpostus being come, in this sort began to speake.
As I am assured (graue Iudges) before my cause shall be fully iustified before you, that you will take me for a man depriued of my wits, (you being informed perâˆ£haps by mine aduersarie to the contrarie of my demande, and by the townesmen of of this present accident) by wilfully oppugning a thing cleerer (as you thinke) then noone day: So when my manifest right is but with indifferent iustice ratified before your impartiall eares, I doubt not, but his false supposall shall be vtterly condemâˆ£ned, and my iust demaund apparantly prooued. Whereupon (bicause the matter may be more rightly scanned and determined) reuerend Iudges you must know, that a fewe daies since I was depriued (to speake more modestly) of a little sonne, and (thinking least of all of such a wickednes, as the thing to be most strange) hauing not long before left him in my house at my departure, and comming hither with all the haste I could, found him vnawares in this towne playing with other children in the streete, onely referring it to your tender consideration (that haue louing chilâˆ£dren) what I might iustly feele, when leauing him (as I saide) at home a little before, I founde him on the sudden in so distant a place: whereupon (as I did but the part of a louing father) by taking him away, so was I iudged of all men to be a madde and sencelesse man. Seeing my selfe mocked and iniured by them for demanding mine